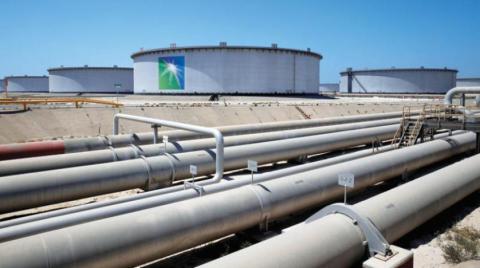 Saudi Arabia’s crude oil exports rose for a fifth straight month in October to the highest in 30 months, the International Energy Forum (IEF) said on Monday, citing data from the Joint Organizations Data Initiative (JODI).
Crude exports rose about 0.7% to 7.773 million barrels per day (bpd) in October, the highest since April 2020, from 7.721 million bpd in September.

Monthly export figures are provided by Riyadh and other members of the Organization of the Petroleum Exporting Countries (OPEC) to JODI, which publishes them on its website.

The data provided for October represents more than 70% of global oil demand and crude production.

The IEF indicated that Russian oil production fell by 107,000 bpd to 9.88 million bpd in October.

The Kremlin said on Monday it was still considering what measures it would adopt in response to the West's imposition of a $60-a-barrel price cap on Russia's oil exports, the state-run TASS news agency reported.

Moscow had originally planned to publish a presidential decree outlining its response - including a possible ban on selling oil to countries that comply with the cap - last week, Kremlin spokesman Dmitry Peskov had told reporters.

“We still have the task of working out what measures will best suit our interests. The work is ongoing, but it is close to completion.”

Russia's Urals crude blend has been trading at a steep discount to the global benchmark Brent since Russia invaded Ukraine, and most recently below $60 cap, according to Russian government data.

Global crude production declined by 228 kb/d in October, led by losses in Russia, Saudi Arabia and the US, IEF said.

According to the report, global demand was at 99 percent of pre-COVID levels in October, while crude production was at 96 percent of pre-pandemic levels.

Meanwhile, oil prices rose on Monday, as optimism around China relaxing its COVID-19 restrictions outweighed fears of a global recession that would weigh on energy demand.

China, the world's top crude oil importer, is experiencing its first of three expected waves of COVID-19 cases after Beijing relaxed mobility restrictions but said it plans to step up support for the economy in 2023.

Oil surged toward its record high of $147 a barrel earlier in the year after Russia invaded Ukraine in February. It has since unwound most of this year's gains as supply concerns were edged out by recession fears.

Oil was supported by the US Energy Department saying on Friday that it will begin repurchasing crude for the Strategic Petroleum Reserve - the first purchases since releasing a record 180 million barrels from the reserve this year.
#COVID-19  #Covid