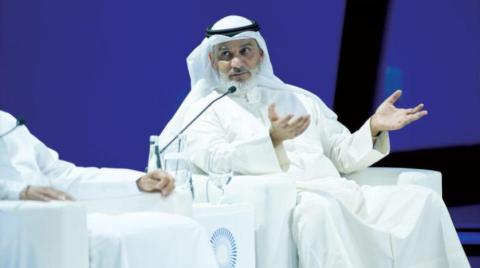 OPEC Secretary-General Haitham al-Ghais stressed the importance of increasing investments in the oil sector to avoid any future volatility in the oil markets.
Ghais said that among the main challenges are the energy transition and the future of energy in general, adding that OPEC has adopted a policy that aims at embracing all forms of energy.

He added that OPEC's research studies have shown that oil will account for 29 percent of the global energy mix in 2045, highlighting another challenge related to investing in the oil sector, as the world requires nearly $12 trillion in investments in this sector alone.

The official explained that last year's challenges included the oil market's volatility and demand-supply unbalance, which led to a significant decline in investments.

Oil investments totaled some $500 million per year but decreased with the drop in prices in 2016, leading to a decrease in production capacity and investments after the COVID-19 pandemic, WAM quoted Ghais.

He highlighted the fact that oil demand in 2045 will reach 110 million barrels per day, compared to 99 million barrels at present, adding that OPEC's expectations also indicate that with population growth increasing by one billion and 900 million people, the demand for oil and energy will increase to fuel global economic growth.

It could witness a growth in its annual gross product of between 2.5 percent and 3 percent, reflecting demand levels.

He pointed out that OPEC's expectations also indicate an increase in energy demand by about 23 percent, from 300 million barrels equivalent to 350 million barrels in 2045. Meanwhile, oil demand levels will remain stable, and natural gas and renewable energy are expected to rise within the overall energy mix in the future while the share of coal will decrease.

On boosting investments in the oil sector, Ghais highlighted that investment delays are attributed to the sharp volatility in oil prices, adding that the role of OPEC and OPEC Plus consists of maintaining market stability.

The Sec-Gen stressed the importance of increasing investments in the oil sector to avoid any future volatility in the oil markets, and to promote investment in fossil energy.

UAE's policies aimed at ensuring global energy stability underscore its clear vision and critical role in being a safe international source of energy and oil supplies, in line with the main objectives of OPEC, said Ghais.

Since joining the organization, the role of the UAE has remained clear: to increase production, maintain economic growth, achieve diversification through other sources, and reduce costs.
#COVID-19  #Covid