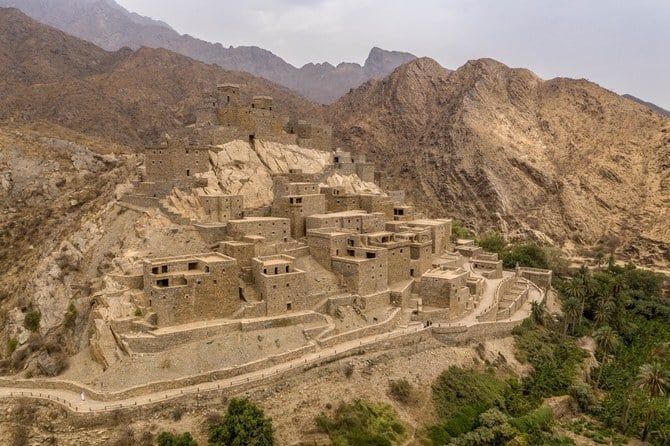 Located in the Hejaz region of western Saudi Arabia, Al-Baha region is home to a wealth of natural wonders and ancient heritage sites, making it one of the Kingdom’s most attractive up-and-coming tourist destinations.

The bare, granite slopes of the Shada Al-Asfal mountains provide an awe-inspiring backdrop to an area rich in the distinctive culture and traditions of the Hejaz.

Situated about 310 kilometers from the pristine coastline of the Red Sea, and 2,270 meters above sea level, Al-Baha enjoys a mild climate all year round. Yet, despite its appealing location and many attractions, the area has remained largely unexplored by foreign visitors. 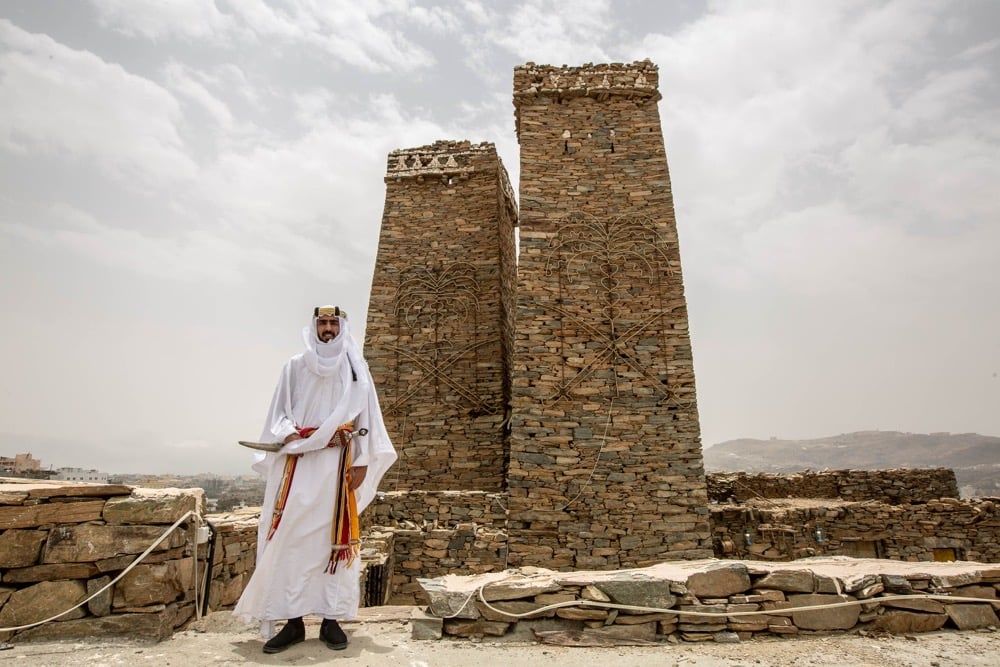 Mohammed Mosfir Almahfoz Al-Ghamdi, right, at his Al-Malad (or “Two Brothers”) Museum, named after its towers.
That is about to change. A new development was recently completed in Al-Baha as part of the Kingdom’s drive to diversify its economy away from hydrocarbons into sectors such as leisure, tourism and hospitality.

In September, the Heritage Commission of the Ministry of Culture unveiled the Dhee Ayn Museum. As the name suggests, it can be found at the 400-year-old stone settlement of Dhee Ayn, the name of which translates as “of spring,” a reference to the water source that runs through it.

Built atop a hill of marble, the village is surrounded by a breathtaking mountain range and the lush vegetation of Wadi Rash, where banana trees flourish and the scent of wild herbs and seasonal blossoms fills the air.

The multi-story homes in Dhee Ayn, which are built from large, flat stones, offer a window into the history of domestic life in the Arabian Peninsula long before the rise of nation states. From afar, the abandoned settlement almost appears to glow as sunlight reflects off its bright marble facades. 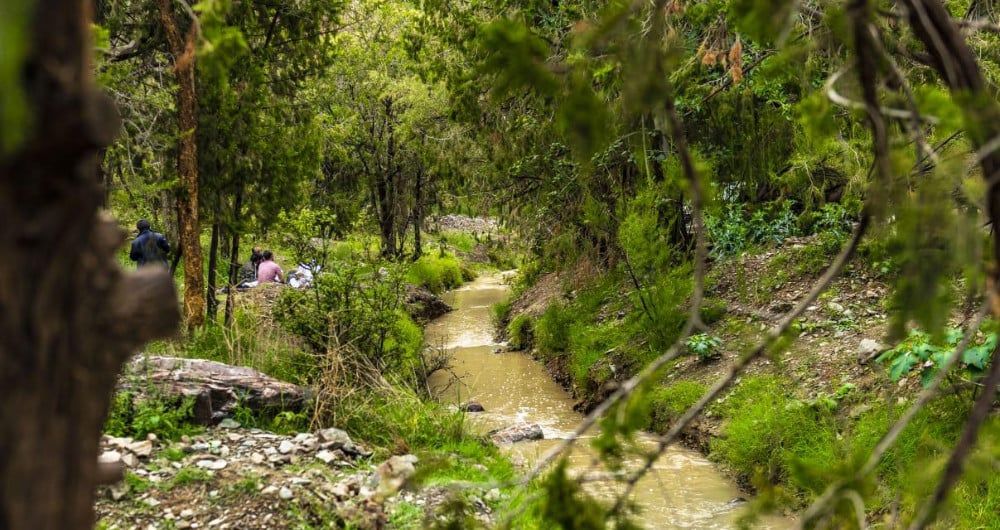 Al-Baha region is home to a wealth of natural wonders and ancient heritage sites.

The village sits in an area known as the “region of 1001 towers.” The mountainside is littered with stone fortresses that once protected communities, plantations and travelers from bandits and rival tribes.

Situated along an ancient trade route, Al-Baha was long a popular destination for merchants and nomadic hunters, and offered one of the principal routes through the southern Arabian Peninsula to Makkah. Remnants of the ancient road can still be seen in the form of fragmented black-and-gray slabs.

Established as an administrative region in 1964, Al-Baha now includes six towns, of which the most important are the capital, Al-Baha City, Al-Mikhwah, Baljorashi and Al-Mandaq. The region is the ancestral home of Al-Ghamdi and Al-Zahrani tribes, and as of 2020 its population numbered 506,866.

Abundant in fertile soil, fresh water, forest and lush pasture, the region remains ideal for human settlement and has long been considered one of the most attractive parts of the Arabian Gulf.

In villages throughout the area, homes, businesses and places of worship are built from regionally sourced granite and basalt, decorated with quartz, and with roofs made of juniper wood covered with mud.

Construction methods are not the only traditions still celebrated by the region’s inhabitants. Al-Aqiq Museum, for example, contains a treasure trove of artifacts, jewelry, fashions and perfumes collected over the years by its owner, Sahla Al-Ghamdi. 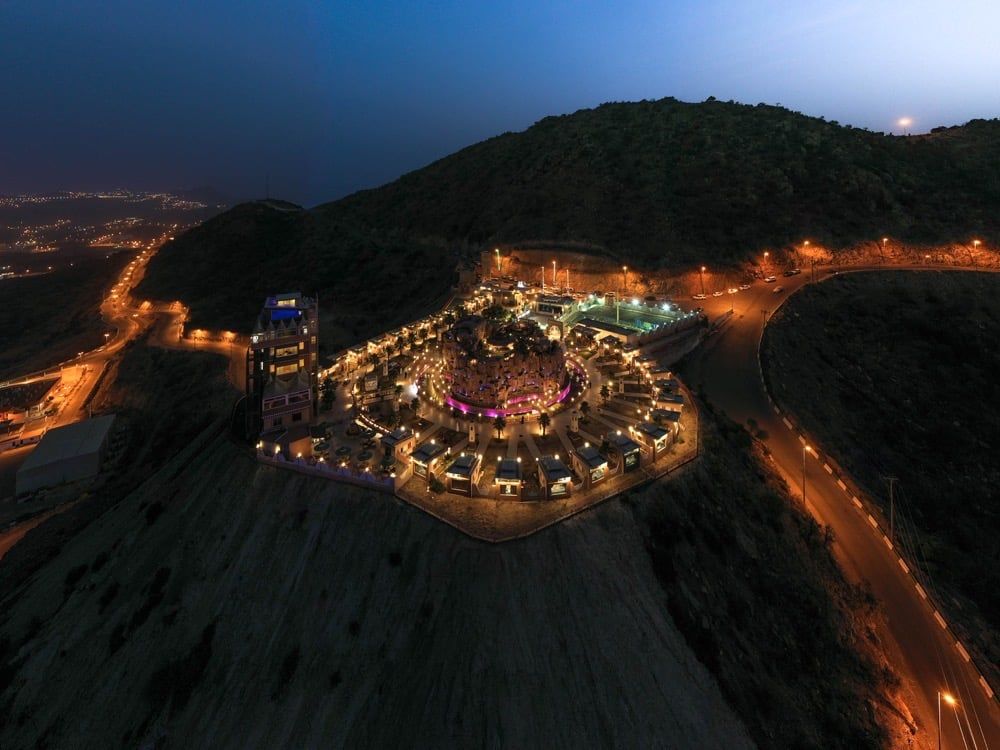 Visitors to the museum are greeted with dates and a cup of Arabic coffee, along with a performance of Ardah, the traditional Saudi sword dance. Female visitors can have their hands decorated with henna and try on some of the traditional robes and abayas that reflect the evolution of fashion in the region.

Other interesting attractions for visitors include Al-Malad, or Two Brothers, Museum, named after the siblings who built the two imposing towers that still stand there, originally to protect the village and store its food.

Museum owner Mohammed Mosfir Almahfoz Al-Ghamdi salutes visitors to the museum, which opened in 2020, with a volley of gunfire from a collection of antique rifles. The exhibits include photographs, books, weapons such as rifles and swords, traditional garments and cutlery that he collected over several decades, which offer visitors a glimpse of the region’s past and its cultural heritage. 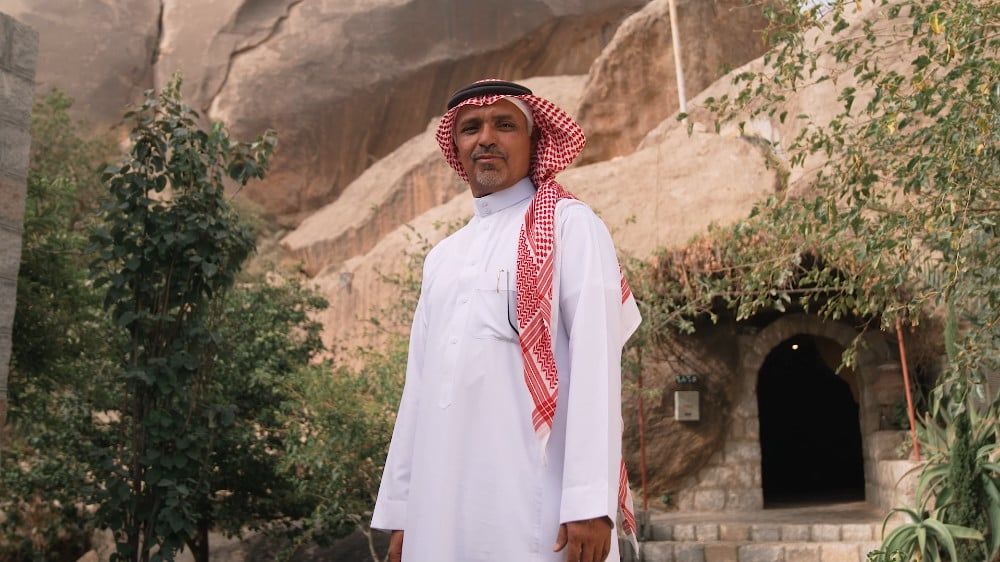 In the nearby town of Baljurashi, another gem awaits visitors: A stunning rural lodge owned by Sharifa Al-Ghamdi, a local woman who after years of teaching mathematics in Jeddah decided to return to Al-Baha and turn her home into a boutique hotel.

The property, which has been carefully refurbished to retain its traditional character and heritage, is decorated with colorful objects from across the region that she collected over the years. She said her thriving hospitality business would not have been possible but for the government’s national reforms in recent years.

“I wouldn’t have been able to decorate and refurbish this home had it not been for Vision 2030 and the increased freedoms given to women,” Al-Ghamdi told Arab News.

The Kingdom’s Vision 2030 reforms agenda is designed to transform social and economic life in Saudi Arabia. Among other things, it aims to make it easier to establish a businesses in a host of new sectors, and increase the empowerment and participation of women and young people in civic and commercial life. 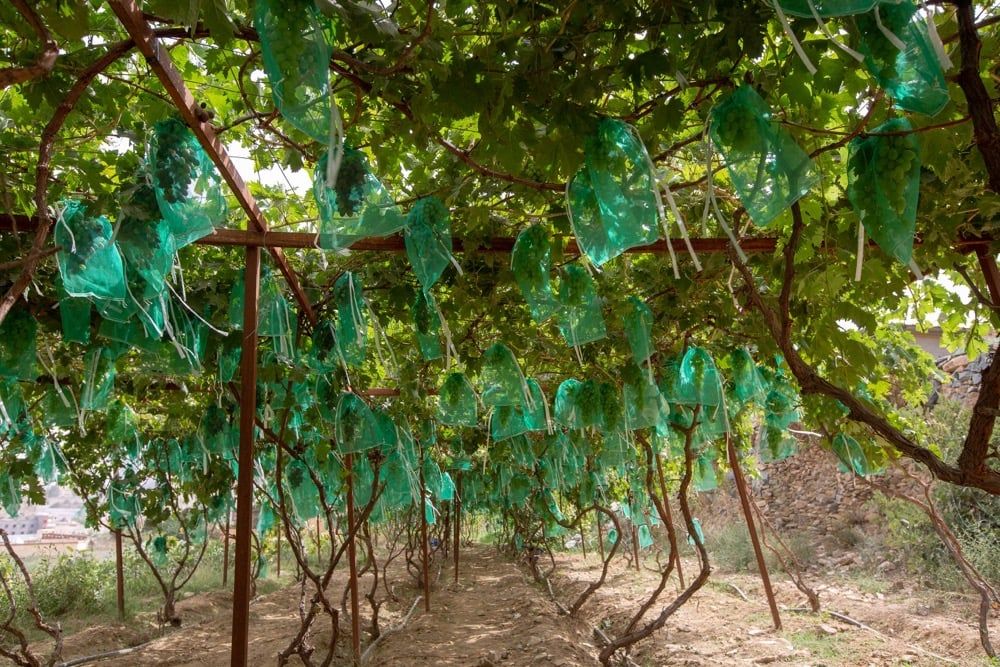 Al-Ghamdi said the reforms, including the easing of guardianship laws that previously required women to be accompanied by a male relative in public, allowed her to hire workmen, purchase the materials to repair and refurbish her property, and to welcome guests.

According to the Ministry of Tourism, the Kingdom aims to increase the sector’s annual contribution to national gross domestic product from the current 3 percent to at least 10 percent by 2030.

Over the past year, the Saudi government has launched several investment schemes designed to help bolster tourism in Al-Baha. In September 2021, the Kingdom’s Tourism Development Fund signed a deal with travel services provider Seera Group to develop a 200-room luxury resort in the region, featuring shops, restaurants and facilities for outdoor activities. The Raghadan Tourist Resort, the first sustainable tourism project in the region, is one of the key investment destinations identified by the National Tourism Strategy.

“Al-Baha’s rich history, cultural heritage, climate, topography and geographic location in the southwest of Saudi Arabia make it an attractive area for tourism and one that will further diversify the country’s offering,” a TDF spokesperson said when the plans were officially launched. 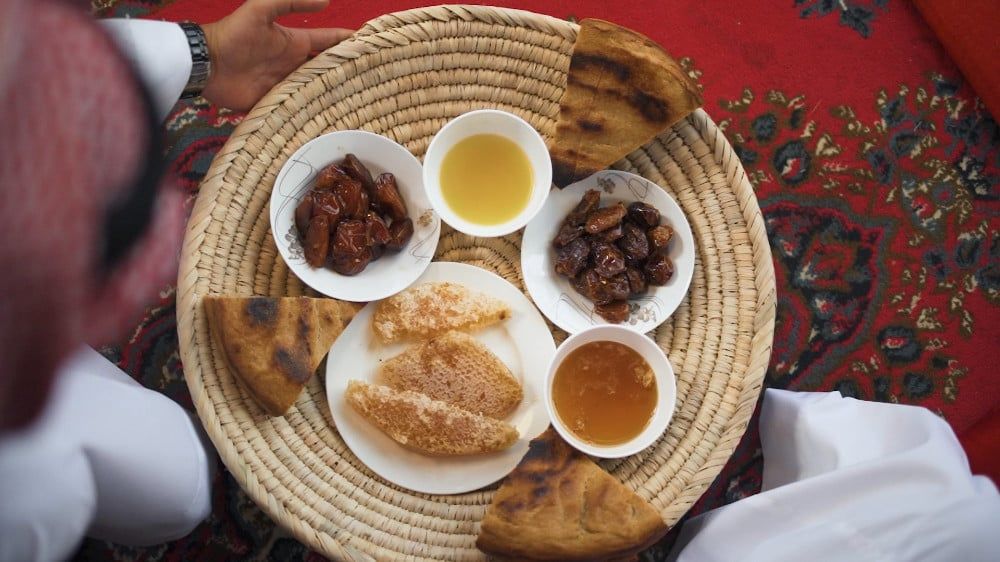 According to the Ministry of Tourism, the Kingdom aims to increase the sector’s annual contribution to national gross domestic product from the current 3 percent to at least 10 percent by 2030.

At the inauguration of the project in July, Abdulrahman Al-Fadley, the Saudi environment minister, said local authorities in Al-Baha had spent more than $152.5 million on various initiatives, including seven projects to construct dams and wells to secure drinking water supplies. There are also plans designed to promote afforestation and to protect vegetation.

Since the beginning of this year’s summer season, Al-Baha has welcomed a growing number of visitors from across the Kingdom who are keen to take advantage of the region’s picturesque landscapes and temperate climate.

One attraction that has proved especially popular is a lavender garden that is located in the middle of the Raghadan Forest Park in the cool Sarawat Mountains west of Al-Baha City.

To reach it, visitors follow a path of natural stone surrounded by waterfalls. It is illuminated by 270 decorative lamps and the flowerbeds are complemented by seating and kiosks, all of which provides an idyllic and peaceful oasis of calm.

The investment in Al-Baha certainly seems to be paying off. Like the many of the giga-projects taking shape along the Kingdom’s Red Sea coast, Al-Baha looks likely to become a must-visit destination for Saudi and foreign travelers in the decades to come. 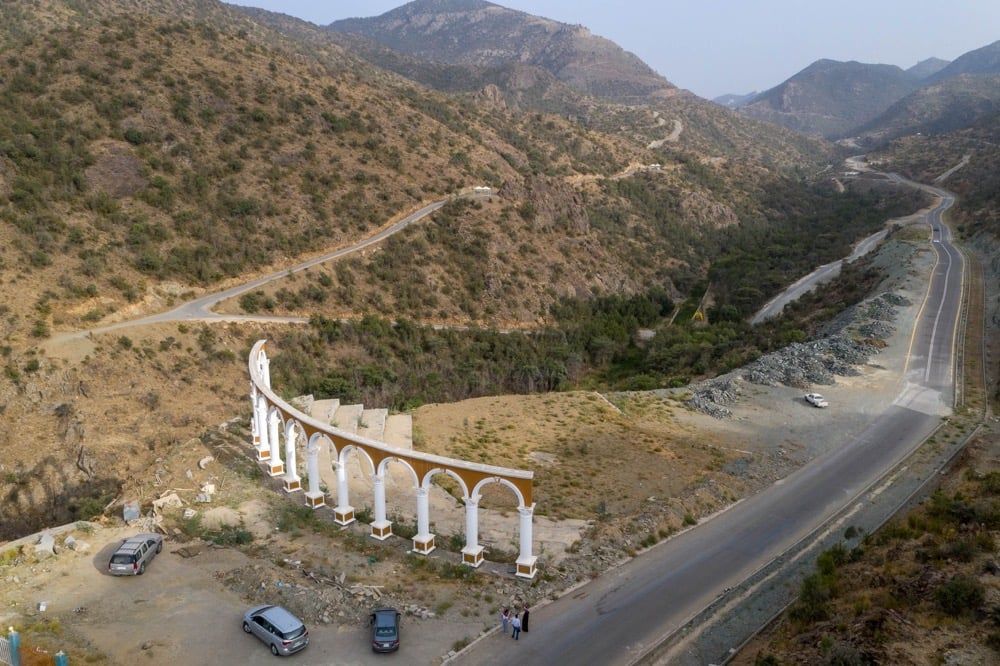 The stunning scenery of the Hejazi mountains.

Much of its initial success is thanks not only to state investment, the region’s natural beauty and its ancient settlements steeped in history, but also to the commendable efforts of the local population to preserve and share their heritage, culture and traditions.

Thanks to them, Al-Baha clearly has the potential to become one of the Kingdom’s most celebrated attractions.