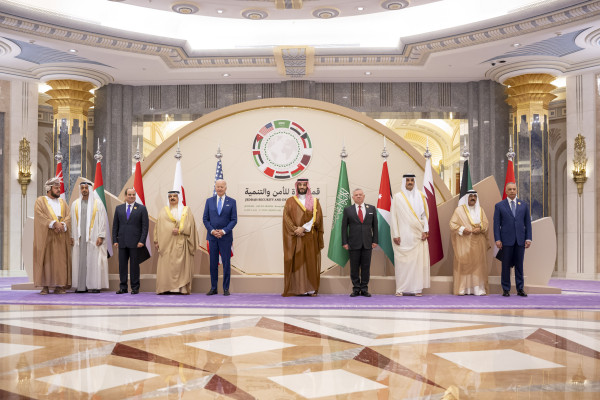 UAE will remain a main, trusted partner in global drive to achieve stability and prosperity: UAE President at Jeddah Security and Development Summit

President His Highness Sheikh Mohamed bin Zayed Al Nahyan has asserted that the UAE is keen on bolstering cooperation between countries in the region and coordination with partners to achieve peace and further stability in the region and the world, as well as tackle global challenges.
The UAE President explained that the UAE's foreign policy is founded on a balanced approach and efforts to broaden the base of interests it shares with other countries to further contribute to realising national development goals, as well as global peace and stability.

We are all aware of the size of challenges that the region and the world are facing, and from that arises a need to align and enhance global efforts to achieve our peoples' aspirations of further progress and prosperity, President His Highness Sheikh Mohamed said on the occasion of his participation in the Jeddah Security and Development Summit, which saw the attendance of Their Majesties and Their Highnesses leaders of the GCC countries, US President Joe Biden, King Abdullah II ibn Al Hussein of Jordan, Abdel Fattah El Sisi, President of the Arab Republic of Egypt, and Dr. Mustafa Al Kadhimi, Prime Minister of the Republic of Iraq.

The UAE President went on to highlight the UAE's belief that peace, dialogue and coexistence are the way to secure the future of generations to come, adding that the path towards achieving a renaissance in the region and restoring its active role on the global arena is clear, as achieving these two objectives requires further solidarity and cooperation and enhancing education opportunities, while maintaining the wellbeing of humans as the main goal.

Historical events have proven that the only way to end conflicts and tensions is utilising wisdom, abiding by international law and using diplomatic means and solutions to resolve problems, thus protecting the interests of everyone involved and preventing further war- and conflict-induced human suffering, His Highness Sheikh Mohamed continued.

Furthermore, the UAE President affirmed that the UAE will remain a main and trusted partner in the global drive to achieve stability and prosperity, adopting an approach that is developed around the pillars of achieving peace and development for all world nations.

We are working to establish frameworks for dialogue and joint work, and are confident of our ability, as a region, to take initiative and bear our responsibilities towards our issues, as well as play a key role in dealing with global issues that affect all of humanity, including climate change and food and energy security, His Highness Sheikh Mohamed noted, adding that the partnership between the US and countries in the region is a strong foundation for fruitful cooperation, especially in issues relating to regional and global development.

The UAE President expressed his thanks and appreciation to Saudi Arabia for hosting the summit and to President Biden for his participation.