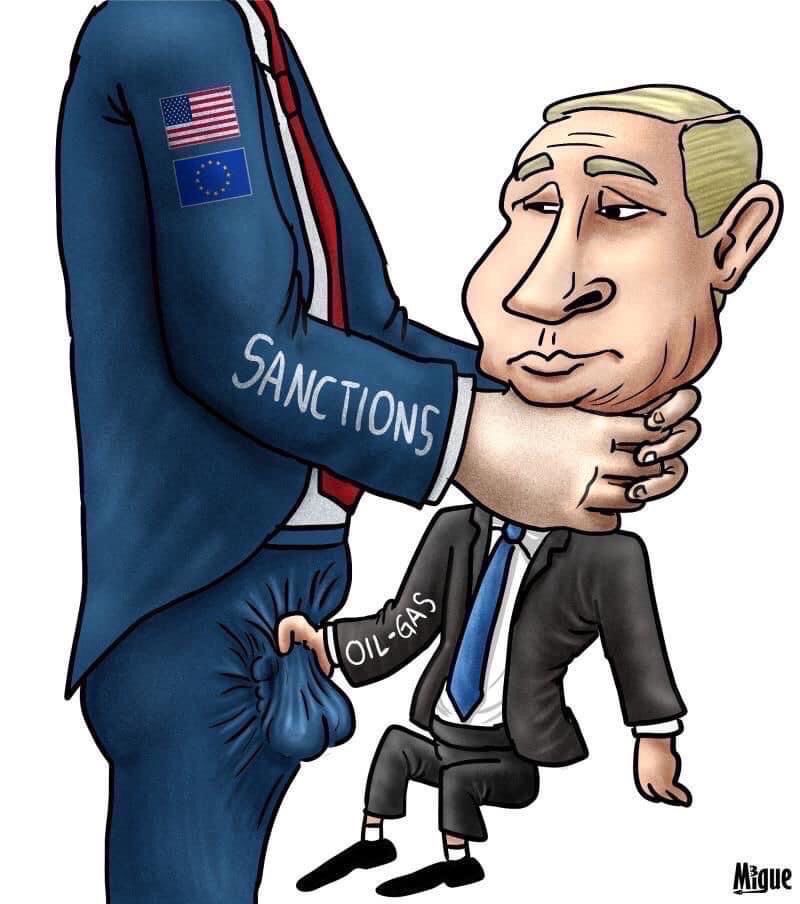 The PetroYuan and the Rise of a New Economic Order

We are witnessing incredible developments in the global economy, driven by geopolitics.
The sanctions that have been heaped on Russia for their invasion of Ukraine seem to be quite ineffective (at least for now), and this has been shown up much sooner than expected.
The PetroYuan and the Rise of a New Economic Order

We are witnessing incredible developments in the global economy, driven by geopolitics.
The sanctions that have been heaped on Russia for their invasion of Ukraine seem to be quite ineffective (at least for now), and this has shown up much sooner than expected.

All the Western measures that have been plunged into Russia’s economic heart, appear not only blunted but are bouncing back to hurt Europe and America, as soon as they were executed.

What is happening is quite shocking.

This phenomenon has profound changes on the global economic landscape that will affect how each of us play our infinitesimal part in an interconnected global economy.

There are several aspects of the West’s sanctions falling flat. The first is of course in the energy trade.

These sanctions were expected to completely deflate Russia’s gas and oil industries, since these are where the country earns its major sources of revenues. Crush that Russian economy!! Emasculate Putin! No oil and gas exports, no more money for war.

An overly simplistic strategy that blew up in the face of its proponents that made all those behind the measures look spineless and disorganised.

First, every West European country found out within days that they cannot execute the strategy. In spite of the pro-Ukrainian outpouring of sympathy and the common “cancel Russia” propaganda, no one can give up Russian gas and oil.

Germany was on the brink of taking on a lot more Russian gas via NordStream 2 just before the crisis. The pipeline has been built and was about to be certified. What does this tell us?

That the economic need (and demand) is obviously there. The import requirements of Western Europe, certainly by Germany, of Russian energy is insatiable.

The leaders of the EU countries were caught by surprise when Russian tanks first attacked. Perhaps they did not think through the realities of their situation before stumbling over each other to support the Americans in the energy trade sanctions. And to show the world they are doing something. Anything...

They might have forgotten that they are not what the US is: the largest energy producer (though not exporter) in the world. And these things, like finding

alternative energy suppliers, take a long time to plan. Instead, they crashed into a gaping hole in days.

It leads me to think that the Americans exerted extraordinary pressure on the West Europeans to stand together to do battle against the Russian aggressors. And the Europeans succumbed.

But within another week, the implications of the sanctions sank in. Not on the Russian side. It happened on the West European side...I am sure many EU government departments worked day and night over several days in early March to determine if alternative sources of energy can replace Russian imports, including the promise of American LNG. At least to get through this current winter…

The cold reality, forgive the pun, was indisputable. After a week since the announcement of sanctions on Russian energy, Germany said it cannot and will not participate in further sanctions led by energy-rich America.

That sounds about right. If you have no energy sources, you cannot threaten your only supplier. And you don’t follow the big brother who really has no concerns about his energy requirements and won’t ever get hurt himself charging forward to quell the evil Russians. Big Brother won’t become cannon fodder; you will...

What is more important to the European public? Gas prices or Ukrainian independence?
Europe baulked. And then ducked.

If that were the end of the story, it would have been fine. The rest of the world would understand the predicament of the EU facing energy costs that would break their backs. ‘Talk too big’ without thinking it through? ...fine, just stand down. Which is what happened. But it didn’t stop there.

The Americans, while energy rich, still need to import about 10 percent of their energy. Maybe only 2-3 percent from the Russians. For sure, they can do without Russian energy.

But that is not the point. The disruption to Europe and other parts of the world, have sent energy prices soaring. It is not a bilateral sales and purchase arrangement – there is a global market for energy affecting prices on every barrel of oil, every cu litre of gas, in the world.

This will lead to serious inflation, as prices at the gas station or heating costs will impact many ordinary citizens’ cost of living. Biden, facing the prospect of this economic pressure continuing, is staring at the prospect of losing the midterms. What is more important to the American public? Gas prices or Ukrainian independence?

No prizes for guessing right.

Biden panicked. Fearing inflation, the White House sent American delegations on a worldwide search for replacements of Russian energy. Well, there are just a limited number of places on the planet you can get it.

The results of that search are, to put it mildly, earth- shattering...

1) The Americans could not even get a phone call in to Saudi Arabia and the UAE traditionally pro-American, to increase production.

The illusion that these countries were American protectorates willing to play ball with Washington DC was shattered in just a couple of days, when it was even said that the Saudi crown prince did not even want to know what an American President thought of the cold shoulder (forgive the pun again);

2) The Venezuelans, slapped with huge economic penalties for years, just smirked and said, well you want our oil, remove those sanctions first;

3) The Iranians, who came close to fighting a war when the US murdered one of their generals, General Sulaimani, by drone strike, gave the Americans a middle finger when they were asked to pump more oil into the market.

There was a missile strike near the US embassy in Kurdistan, which the Israelis said came from Iran.

While silent on the matter, the Iranians were obviously sure that they could do this while the Americans are preoccupied with the Ukrainian war and the backfiring of the economic war they launched on the Russians.

These were not even the most serious consequences of the above skirmishes in the energy markets.

China has announced a state visit of President Xi Jinping to Saudi Arabia. The first foreign trip by him since Covid 19 began.

This is serious stuff. The scuttlebutt is that of the large energy trades that the two countries have signed as part of the official reason for the visit, the deals will be priced in Chinese RMB, a transaction negotiated over 6 years that is revolutionary because if true (very likely or there would not be a state visit at this time), it would break the US Dollar’s monopoly on the international oil trade. It will be the advent of the PetroYuan.

It will also be the signal that Saudi Arabia has officially moved into the Chinese sphere of influence. After all, it is already selling 25 percent of all its exports to China, the most important customer for them.

This comes on top of China signing deals with Russia to buy their energy exports and for the logistical arrangements to deliver that output.

Like I said last week, don’t blame the Chinese – they already declared that sanctions against Russia are not the way to end the conflict in Ukraine. (At least there are some smart people in the room...) They will not support the US-led sanctions. If the EU cannot even support these same sanctions, why look to China to do it?

The next major event that has completely torpedoed the energy trade sanctions is that India is signing a deal with Russia, their long-time ally, to buy a lot of that oil at a 25 percent discount.

A 3million barrel deal is already closed. Oh, my word!!! Does Russia now have enough to sell?

And the Indians also want to settle that trade in RUPEES!!

If you ask me, the Americans and the EU have totally screwed themselves.

The Europeans have put themselves into the position of being a non-reliable commercial partner. Yes, we all understand the indignation, maybe fury, as well as anguish of seeing Ukraine invaded and in the process of being dismembered.

But they have only themselves to blame for collaborating with the Americans to cut Russia down to size through efforts such as NATO eastward expansion, AND they should have known better to impose sanctions for such an important commodity as energy.

There are plenty of other countries who can easily replace their demand for Russian oil and gas. Apparently, the EU leaders don’t know geography or the economics of international trade.

Or is it just arrogance? You know, the pompous attitude that we are the big customers who can call all the shots.

The Russians have basically replied, “f—k you”! Yes, they have other big buyers like China and India, the two most populous countries in the world and all that stuff is transportable within a contiguous landmass in central Asia, far easier than NordStream 1 and 2 which goes under the Baltic Sea and traversing a long distance from oilfields in Siberia far to the east.

This is a monumental mistake on the part of the West. Monumental.

If this intra-Asia trade becomes well established, there will never be a need for Russia to sell anywhere else.

China and India have an insatiable demand for energy in the decades ahead because of population sizes and their rapidly industrialising economies.

And if the Russians don’t, or won’t, sell anywhere else, where is Europe going to get its energy?

Even the Gulf countries are selling their energy to China and India, which are also far closer geographically than Western Europe. Qatar was flatly refusing to increase their gas output to be sent westwards.

And Putin was heard to say, “if NordStream 2 is closed, we might as well also close down NordStream 1”.