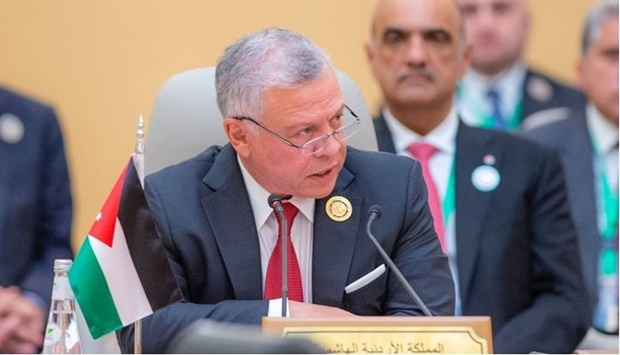 King of Jordan: No security nor stability without guaranteeing establishment of independent Palestinian state

King Abdullah II of Jordan underlined Saturday that there is no security, stability or prosperity in the Middle East without a solution that guarantees the establishment of an independent Palestinian state on the borders of the June 4, 1967, with East Al Quds as a capital to live in security and peace alongside Israel.
In a speech during the Jeddah Security and Development Summit, he said that economic co-operation in the region must include the Palestinian National Authority to ensure the success of regional partnerships, reiterating the importance of considering opportunities for co-operation by seeking regional integration in food security, energy, transport and water.

He stressed that the participation of US President Joe Biden in the summit is an evidence of the US keenness on the stability of the region, and an affirmation of the historical and close partnership between the two sides, and it also emphasises the leadership role of the US president and his efforts to strengthen regional security and support the efforts to achieve peace and prosperity.

The Jordanian king pointed out that the Jeddah summit comes at a time when the region and the world are facing multiple challenges, from the economic repercussions of the Covis-19 pandemic, the Ukrainian crisis on energy and food, in addition to the ongoing conflicts suffered by the region, so it is necessary to consider opportunities for co-operation and joint work, by seeking regional integration.
#Joe Biden