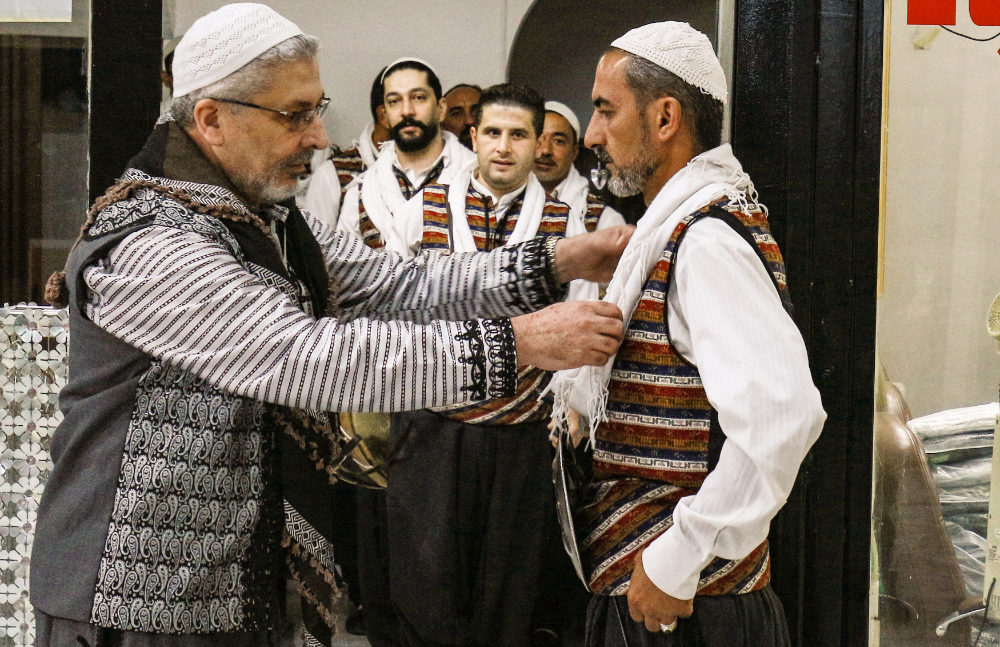 After war, Syrians in Jordan find joy and jobs in dance

“They add an atmosphere of joy to our celebration,” said Fahed Shehadeh, who hired the Bab Al-Hara dance troupe in the capital Amman to mark the graduation of his two sons from university.

“I am Jordanian but of Syrian origin, and I brought the group because I admire their dancing skills, music, clothes and their songs,” said 55-year-old Shehadeh, celebrating with family, friends and neighbors.

Traditionally seen at weddings, the popularity of Arada — rooted in the Arabic for a “performance” — has had its songs modified to fit various celebrations. A troupe typically consists of 10 to 20 dancers, wearing loose-fitting black trousers, white cotton shirts, embroidered vests, white skullcaps and a shawl wrapped around the waist.

Swords and decorative shields are worn, and the dance culminates in members spinning their blades in the air, before engaging in ceremonial fighting.

The troupe leader, Moutaz Boulad, 60, said Arada had grown in popularity in Amman, with daily events in the summer months and several engagements each week in winter. Boulad, who left Syria in 1988, says the shows have become an important means to earn cash for some of those who fled the war that erupted in 2011.

“Some of the dancers were not good when they first came to us, but they learned from my sons and I in order to improve their financial situation,” he said.
Syria’s war is estimated to have killed nearly half a million people and displaced millions; more than 6.6 million fled to neighboring Jordan, Turkey and Lebanon.

Jordan hosts almost 650,000 Syrians registered with the UN, but Amman estimates close to 1.3 million Syrians have arrived since 2011.

The UN has said that close to 80 percent of Syrians in Jordan live below the national poverty line, surviving on three dollars per day or less.
Boulad said his dancers came from various professional backgrounds.

“Most dancers have different jobs beside the Arada,” Boulad said.

“Some are university students, accountants, restaurant workers, tailors and electricians — but this is something that gives an amount of money to help cope with life.”

For dancers like Ahmed Abu Shadi, 43, who fled Syria in 2013 and works as a plumber, performing the Arada helps him raise his three children.

“With plumbing there are days when I work, and days with no customers,” he said.

Another member, who worked in a medical laboratory and asked for his name to be withheld, fled the Syrian city of Homs in 2018.

The dancing helps add some $300 each month to his regular $700 salary from the laboratory to support his family, while they wait for applications through the UN refugee agency to be processed.

“I have applied for asylum through the UNHCR and hope we can start a new life abroad,” he said.

“This dance is a very important part of our Syrian identity, heritage, culture and our daily life — we must preserve and teach it to our children and grandchildren,” he said.

“This art is in my blood, I love it, I can’t imagine myself, my life without this.”

He dreams of one day dancing again on his home soil.

“I will continue to dance wherever I go,” he said.

“But of course, I prefer that the situation improves one day so that we can all return to our country, Syria.”