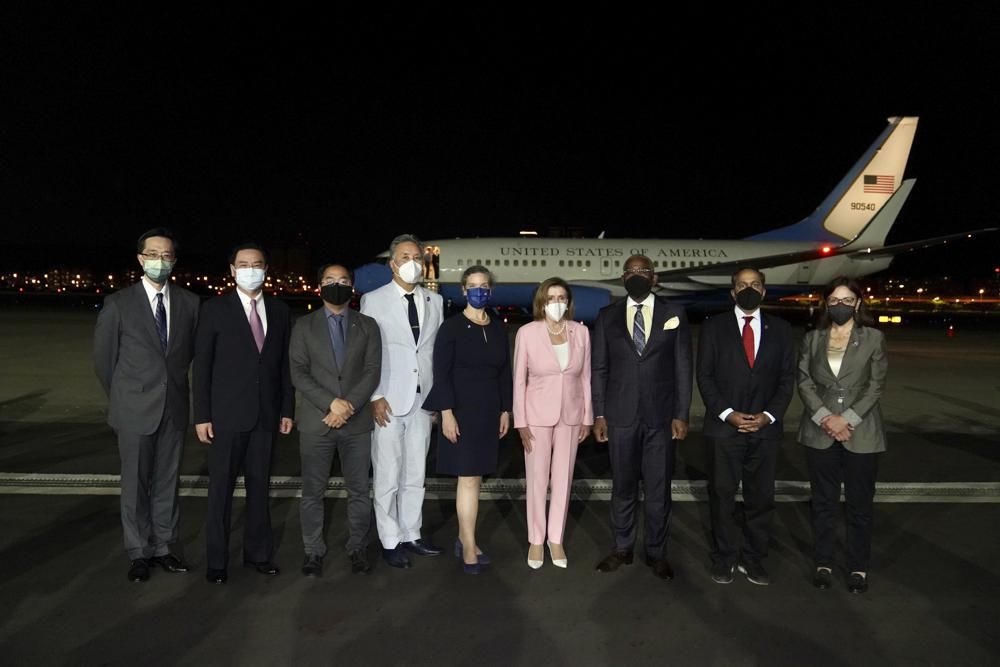 Beijing responds by announcing that live ammunition military drills will take place around the island from Thursday until Sunday.

Qin Gang, China’s ambassador to the US, says Pelosi’s visit will escalate tensions both across the Taiwan Strait and between Beijing and Washington. ‘US and separatist forces will be responsible for any consequences caused by this,’ according to a 1,143-word statement by Chinese officials.

“US House Speaker Nancy Pelosi has gone ahead with her visit to Taiwan disregarding China’s repeated opposition. The move has been a serious violation of the one-China principle and the stipulations of the three China-US joint communiques, a serious undermining of China’s sovereignty and territorial integrity, a serious crush of political foundation of China-US relations, and sent a seriously wrong signal to ‘Taiwan independence’ separatist forces,” the statement said.

“China firmly opposes this and strongly condemns this, and has lodged serious representation with the US side.”

“China will take all necessary measures to resolutely defend the country’s sovereignty and territory. The US and separatist forces will be responsible for any consequences caused by this,” it said.

The statement repeated Chinese leader Xi Jinping’s latest warning to US President Joe Biden in a phone call on Thursday that anyone who “plays with fire” on the Taiwan matter “will get burnt”.

In the meantime, the Chinese People’s Liberation Army announced the beginning of joint military exercises off Taiwan as retaliation to Pelosi’s visit. The PLA statement blamed Taiwan’s ruling Democratic Progressive Party, which President Tsai Ing-wen represents, for colluding with foreign forces and “insisting” on inviting Pelosi to the island.

“The US government should have restrained Pelosi’s reckless actions and stopped her from going against the tides instead of acting in collusion and condoning her, escalating tensions in the Taiwan Strait and damaging China-US relations,” state broadcaster CCTV quoted vice foreign minister Xie Feng as saying.

The blitz of responses by Beijing included an appearance on CNN by China’s ambassador to the US, Qin Gang, who said Pelosi’s trip would escalate tensions both across the Taiwan Strait and between Beijing and Washington.

“Nancy Pelosi is not a person in the street,” said Qin. “As speaker [she] is No 3 in the US government. So her visit in whatever form and at whatever time during her tenure carries high political sensitivities.”

Qin did not respond to questions about the live-fire drills, but said it was the PLA’s duty “to defend China’s sovereignty and territorial integrity”.

“We will take whatever [measures] we can to respond and to protect, to safeguard our sovereignty [and] territorial integrity, and our response will be very full, strong and forceful,” he said.

Pelosi explains her Taiwan trip as vital to defense of democracy, freedom.

Moments after the US speaker of the House lands in Taipei, The Washington Post publishes an essay in which she outlines the reasons for her visit.

US Speaker of the House Nancy Pelosi said her trip to Taiwan is a signal to the world that Washington stands with the self-governed island’s “vibrant, robust” democracy and has a “sacred vow” to support its defense amid growing threats from Beijing.

“In the face of the Chinese Communist Party’s accelerating aggression, our congressional delegation’s visit should be seen as an unequivocal statement that America stands with Taiwan, our democratic partner, as it defends itself and its freedom,” she wrote in an essay published in The Washington Post moments after she landed in Taipei on Tuesday, her first public comments outlining her reasons for the trip.

“We cannot stand by as the CCP proceeds to threaten Taiwan – and democracy itself,” she said. “By traveling to Taiwan, we honor our commitment to democracy: reaffirming that the freedoms of Taiwan – and all democracies – must be respected.”