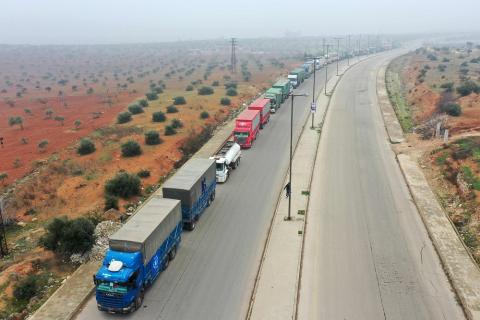 The UN Security Council voted unanimously Monday to keep a key border crossing from Türkiye to Syria’s opposition-held northwest open for critical aid deliveries for another six months. Syria's ally Russia — in a surprise move — supporting the resolution.
All eyes had been on Russia, which in the past has abstained or vetoed resolutions on cross-border aid deliveries. It has sought to replace humanitarian aid crossing the Turkish border to northwest Idlib province with convoys from government-held areas across conflict lines. Since the early years of the war, Türkiye has sided with and supported Syria’s opposition.

UN Secretary-General Antonio Guterres had warned that the already dire humanitarian situation in Syria is worsening and if the aid deliveries from Türkiye to northwestern Idlib aren’t renewed, millions of Syrians might not survive the winter.

Guterres said deliveries have increased across conflict lines within the country, but he said they cannot substitute for “the size or scope of the massive cross-border United Nations operation.” On Sunday, a convoy of 18 trucks entered the area of Idlib through front lines held by Syrian government forces.

The resolution put the Security Council on record as “determining that the devastating humanitarian situation in Syria continues to constitute a threat to peace and security in the region.”

In July, the council approved a resolution extending humanitarian aid deliveries to Idlib, which is home to 4.1 million people. Many of the people sheltering in the area have been internally displaced by the nearly 12-year conflict that has killed hundreds of thousands and displaced half the country’s pre-war population of 23 million.

The resolution will allow for aid deliveries through the Bab al-Hawa crossing from Türkiye to northwest Syria to continue for the next six months, until July 10.

In addition to pushing for more cross-front-line aid deliveries, Russia has also pushed for early recovery projects in Syria.

Guterres said in the December report that at least 374 early recovery projects have taken place throughout the country since January 2021, directly benefiting over 665,000 people, but he said “further expansion” is needed.

The resolution encourages efforts to improve cross-front-line aid deliveries and calls on all 193 UN member states to respond to Syria’s “complex humanitarian emergency” and meet the urgent needs of the Syrian people “in light of the profound socioeconomics and humanitarian impact of the COVID-19 pandemic.”