Taliban To Open High Schools For Girls Next Week

However, the girl students would be taught separately from males and only by female teachers, said an Afghanistan's education ministry official.

The Taliban will allow girls around Afghanistan to return to class when high schools open next week, an education official said on Thursday, after months of uncertainty over whether the group would allow full access to education for girls and women.

"All schools are going to open to all boys and girls," Aziz Ahmad Rayan, a spokesman for the Ministry of Education, told Reuters.

"But there are some conditions for girls," he said, adding that girl students would be taught separately from males and only by female teachers.

In some rural areas where there was a shortage of female teachers, he said that older male teachers would be allowed to teach girls.

"There is no school that will close for this year. If there is any school that closes, it is the responsibility of the education ministry to open it," Rayan added. 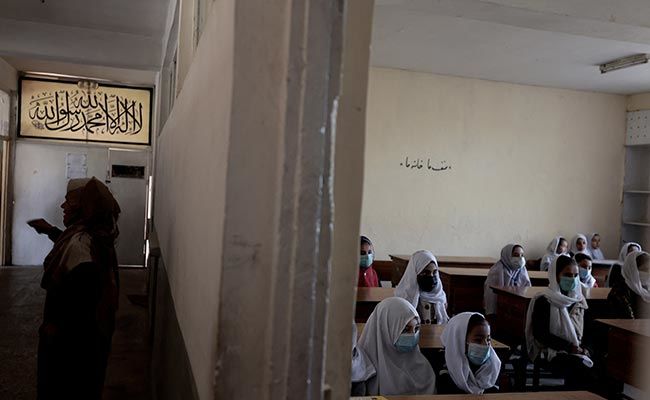 Allowing girls and women into schools and colleges has been one of the key demands the international community has made of the hardline Islamist movement since it toppled the Western-backed government last August.

Most countries have so far refused to formally recognise the Taliban, amid concerns over their treatment of girls and women and allegations of human rights abuses against former soldiers and officials from the ousted administration.

The Taliban have vowed to investigate alleged abuses, and say they are not seeking revenge on their former enemies.

The last time the group ruled Afghanistan, from 1996 to 2001, they banned female education and most employment. Since regaining power, boys and men have returned to education in far greater number than girls and women.

The Taliban is seeking to run the country according to its interpretation of Islamic law while at the same time accessing billions of dollars in development aid that it desperately needs to stave off widespread poverty and hunger.

Sanctions against some leading members of the group have complicated the situation.

The Taliban say they respect women's rights in accordance with Islamic law and local custom. But many women have reported restrictions on access to public life, including jobs, forcing some to drop out of the workforce.

"There has been a huge focus by donors on girls' secondary schools - multiple donors have told me they see this issue as 'totemic'," she said.

Barr added that reopening schools would not necessarily mean that the broader rights of women and girls in society would be protected.

Seventeen-year-old Farzana said she was already washing and ironing her uniform as she anticipated joining her friends in her Kabul classroom. After six months at home, she said she and others had struggled mentally being away from studies.

"I feel very powerful. We can show not only (the Taliban) but also the world (that) we never stop, and Afghanistan won't return to previous decades," she said.