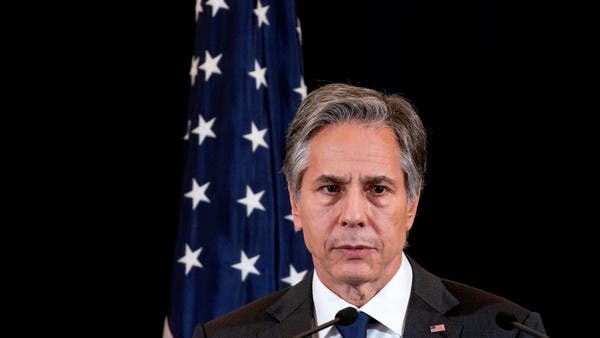 US Secretary of State Antony Blinken said on Wednesday that Saudi Arabia’s support to Ukraine was a “positive development,” but did not “compensate” for the OPEC+ decision to cut production.
Blinken acknowledged Saudi Arabia’s recent $400 million humanitarian aid for Ukraine and the Kingdom’s vote at the UN to condemn Russia’s annexation of Ukrainian territory.

“These are positive developments. They do not compensate for the decision that was made by OPEC+ on production. But we take note of that,” he said at a Bloomberg News event.

OPEC+, the group comprising of the Organization of Petroleum Exporting Countries plus allies including Russia, decided earlier this month to cut its oil production target by 2 million barrels per day.

The decision infuriated Joe Biden’s administration which is worried about higher consumer prices right before the November US midterm elections.

Biden accused Saudi Arabia of siding with Russia and vowed that “there will be consequences” for Washington-Riyadh ties.

Riyadh rejected Washington’s criticism as “not based on facts” and stressed that the OPEC+ decision was “purely economic”, according to a statement by the foreign ministry.

Blinken reiterated Washington’s stance that Saudi Arabia had made the “wrong decision” with the oil production cut.

“There was nothing to suggest in the analysis that we had – and it was shared with the Saudis – that we were looking at prices plummeting in ways that would be problematic for them.”

The top US diplomat said that Biden’s administration was reevaluating its relationship with the Kingdom.

“We're going to do it in a very deliberate fashion, in consultation with members of Congress to make sure of this, that the relationship better reflects our own interests,” he said.

Saudi Arabia’s ambassador to the US, Princess Reema bint Bandar, said in an interview with CNN aired on Tuesday that a review of US-Saudi ties was a “positive thing” and stressed that the OPEC+ decision was purely economic.

“But you are hearing it from the horse’s mouth: This is not political; this is purely economic, based on the expertise of 40 and 50 years of mapping,” Princess Reema said.
#Joe Biden