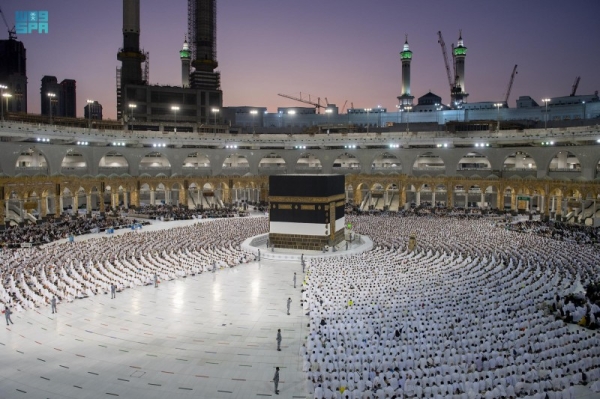 A large number of Hajj pilgrims performed on Wednesday the ritual of Tawaf Al-Qudum (Tawaf of Arrival), before their moving into Mina on the Day of Tarwiyah, Thursday, which is the first day of the annual pilgrimage of Hajj.

There are a total of one million pilgrims performing Hajj this year. Around 150,000 domestic pilgrims would join about 850,000 foreign pilgrims. The foreign pilgrims are performing Hajj for the first time after a hiatus of two years following the travel restrictions caused by the outbreak of coronavirus pandemic. Only limited number of domestic pilgrims were allowed to perform Hajj during 2020 and 2021 Hajj seasons due to the unprecedented pandemic situation.

On the morning of Wednesday, 7th of Dhul-Hijjah, pilgrims flocked to the Grand Mosque in Makkah to perform the Arrival Tawaf, before their convergence on the tent city of Mina to start their spiritual journey of a lifetime. Pilgrims will move into Mina tonight and Thursday morning to mark the beginning of the annual pilgrimage. They will spend the day and night in Mina, engaged in their spiritual preparations for the standing at Arafat, which marks the climax of the Hajj pilgrimage, on Friday.

Meanwhile, the General Presidency for the Affairs of the Two Holy Mosques, represented by the Agency for Counseling and Guidance Affairs, announced that it has identified three areas at Grand Mosque to provide services for the pilgrims performing tawaf. These areas are King Fahd Gate, Ajyad Gate, and Al-Salam Gate. The agency clarified that pilgrims will be received at these locations with facilitating them to perform their rituals in complete peace of mind and feeling of security.

The presidency confirmed that there are more than 100 mutawwifs or Haj guides, to supervise the services being rendered to the pilgrims, and meet their requests, through accompanying them to perform their rituals.

The mutawwifs are being provided with several training and orientation courses related to the rituals of Hajj, in addition to enabling them to acquire several skills for dealing and communicating with the pilgrims, the presidency said, adding that they are also directed to comply with the precautionary measures.