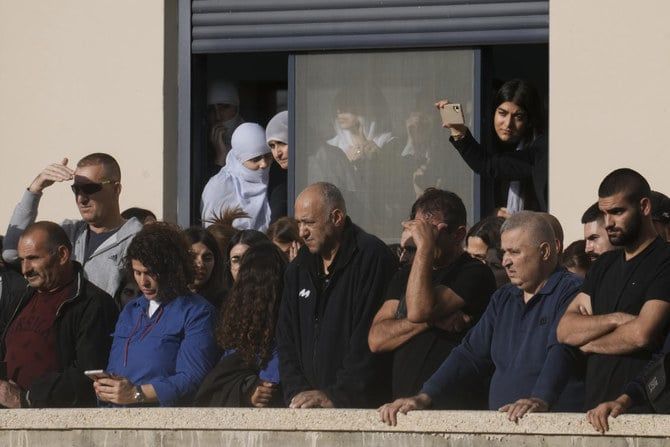 The body of an Israeli teenager snatched by Palestinian militants in the occupied West Bank was returned to his relatives Thursday, following intense talks to avoid an escalation of violence.
Israeli Prime Minister Yair Lapid had on Wednesday threatened tough reprisals against those who had taken the body of Tiran Fero, a 17-year-old Israeli Druze who was critically wounded in a car accident a day earlier.

The Israeli military said his body was released “as a result of the efforts of the security forces and in coordination with the Palestinian authorities.”

The abduction from a Jenin hospital was not immediately claimed by any particular group, but local sources told AFP that Palestinian militants were holding the body in the city’s refugee camp where various factions are present.

Israelis, or their mortal remains, have previously been abducted to be used as bargaining chips to secure the release of Palestinian prisoners or the return of the bodies of Palestinians seized by Israel.

A source within the Islamic Jihad told AFP a meeting was held Wednesday evening between the militant group, the Fatah movement, the Palestinian Liberation Organization and the Palestinian Authority over the affair.

“The demand is to the Palestinian Authority to pressure the occupation government (Israel) to release the bodies of the 148 martyrs that the occupation is holding,” the source said.

Israel has not announced any such agreement, with a military official telling journalists the army faced two options.

“One, through the Palestinian Authority. And two, was going in for a military operation in the city, in the camp, that’s probably... very, very violent,” he said.

Israeli forces frequently launch deadly raids in Jenin in pursuit of militants, although civilians including American-Palestinian journalist Shireen Abu Akleh have also been killed in such operations.

The Israeli official said the militants had wrongly thought Fero was a soldier and negotiations were handled through the Palestinian Authority.

Israeli Defense Minister Benny Gantz thanked Palestinian officials on Twitter for “this humanitarian gesture that comes after a miserable and inhumane act.”

The PA nominally controls urban centers across the West Bank, which has been occupied by Israel since the Six-Day War of 1967.

On Thursday, the army reopened two checkpoints between Jenin and Israel which were closed after the teenager’s body was seized.

The crossings are an economic lifeline for Palestinians, as well as Arab-Israelis, including members of the Druze minority, who visit the northern West Bank frequently.

After Fero’s remains were transferred, the Israeli premier offered his condolences to the family and the broader Druze community “on the tragic death of
Tiran, who was supposed to celebrate his 18th birthday today.”

The teenager’s father, Hossam Fero, said his son died after being abducted from the Jenin hospital.

“When I went upstairs I saw the heartbeat, all the machines, everything was working... When they abducted him, my son died,” Fero said at his son’s funeral.
“My heart breaks over Tiran, instead of me wishing him a long life I’m saying rest in peace, my darling.”

Hundreds of people attended the funeral in the family’s hometown of Daliat Al-Carmel, where local authorities declared a day of mourning.

The incident comes against a violent backdrop in the West Bank, where two Palestinians died from wounds sustained during an Israeli military operation in the city of Nablus on Tuesday.

Wednesday saw the first bombings in Jerusalem since 2016, with an Israeli-Canadian teenager killed in twin explosions at bus stops.