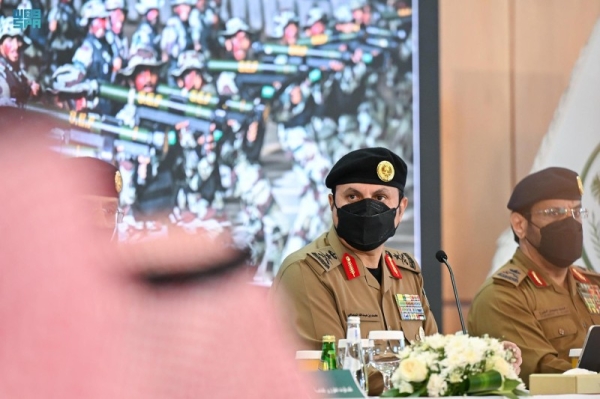 Lt. Gen. Al-Bassami: No room for political slogans in Hajj

Director of the Public Security Forces and Commander of Hajj Security Forces Lt. Gen. Muhammad Al-Bassami reiterated on Monday that there is no room for political slogans at the Holy Sites during Hajj.

“The Ministry of Interior will not allow this to happen, anything that affects the safety and security of pilgrims,” he said while addressing the press conference of the Hajj security forces after inspecting the preparedness of the forces for the Hajj of 2022, which will begin on Thursday.

When asked about the role of women in Hajj security operations, Al-Bassami said: “The phase of classification between men and women was over as a complete integration has taken place.” He expressed pride in the roles played by women in the security sector.

Al-Bassami declared the readiness of all security and military sectors to render the best possible services during Hajj. “All plans are in place for a safe and hassle-free pilgrimage,” he said.

Al-Bassami revealed that two security plans have been approved by the Ministry of Interior for this year’s Hajj and these include a plan for maintaining law and order, and a general plan for undertaking public security tasks and responsibilities.

“The general plan included the preparations to confront any actions that are aimed at undermining security, as well as preventing all activities that affect the pilgrims from performing their rituals in ease and comfort.

“The presence of security forces will be beefed up to monitor security-related issues and respond to them quickly,” he said while emphasizing that measures will be taken to prevent crimes, pickpocketing, or any behavior that might affect the security and safety of pilgrims.

Al-Bassami said the general plan also includes the application of a foolproof safety system for pilgrims through diligent crowd management whether inside the Grand Mosque or the Holy Sites, or the Central Haram Area, so as to ensure smooth traffic flow at the entrances of Makkah and the Holy Sites, and security control centers.

“The presence of security forces will be intensified in these centers to prevent violators, intruders, or transporters of illegal pilgrims, as well as to ensure smooth flow of traffic and to issue permits for vehicles to enter the Holy Sites,” he said while noting that a tight security cordon is in place at the entire Holy Sites.

Al-Bassami said 63 bogus Hajj campaigns were busted all around the Kingdom. A total of 288 citizens and residents were arrested for the violation of the Hajj regulations, in addition to eight illegal transporters of pilgrims.

Another 2,062 violators of residency permit (iqama) regulations, who were planning to perform Hajj illegally, were also apprehended. About 99,800 residents who did not obtain the necessary permits to enter Makkah have been sent back. A total of 69700 vehicles transporting unauthorized workers and pilgrims were also returned, he added.

Attending the press conference, Maj. Gen. Saleh Al-Murabba, commander of the Jawazat Forces in Hajj, announced the completion of the phase of the arrival of pilgrims from outside the Kingdom through airports, seaports and land entry points.

There has been effective coordination between the Ministry of Hajj and Umrah and the General Authority of Civil Aviation for the grouping of pilgrims, as well as to organize return trips to their countries in order to avoid overcrowding at airports after their performance of the pilgrimage.

Al-Murabba reiterated that the Jawazat Directorate showed no leniency in taking punitive measures against violations with regard to illegal transportation of pilgrims.