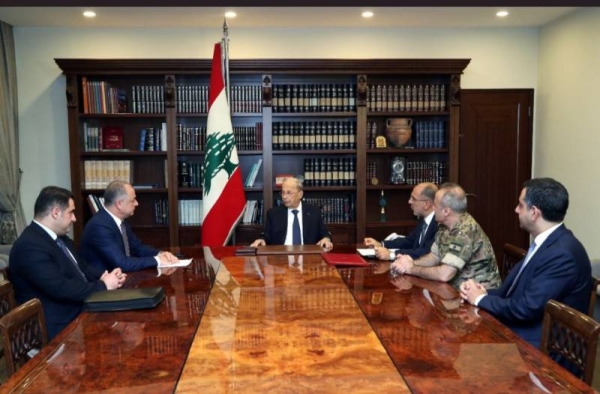 Israel and Lebanon have officially approved a historic US-brokered agreement laying out their maritime boundary for the first time, which opens up the possibility for both countries to conduct offshore energy exploration.
Lebanon’s President Michel Aoun signed a letter at the presidential palace on Thursday morning that will be submitted to US officials at Lebanon’s southernmost border point of Naqoura later in the day.

Lapid said the deal was a “political achievement” for Tel Aviv as “it is not every day that an enemy state recognises the State of Israel, in a written agreement, in front of the entire international community”.

The agreement comes after months of indirect talks mediated by Amos Hochstein, the US envoy for energy affairs, and the deal was welcomed by US President Joe Biden.

“[The agreement] will secure the interests of both Israel and Lebanon, and it sets the stage for a more stable and prosperous region,” Biden said in a statement, before adding that the Middle East was “one step closer” to being more “integrated”.

The two countries have no diplomatic relations and have formally been at war since Israel’s creation in 1948.

Beirut has sought to avoid framing the agreement as normalisation with Israel, insisting that another annexe scheduled to be signed by both sides at the UNIFIL headquarters in Naqoura later on Thursday be signed in separate rooms.

Aoun countered the Israeli claim that the deal meant that Lebanon had implicitly recognised Israel. “Demarcating the southern maritime border is technical work that has no political implications,” Aoun said.
#Joe Biden