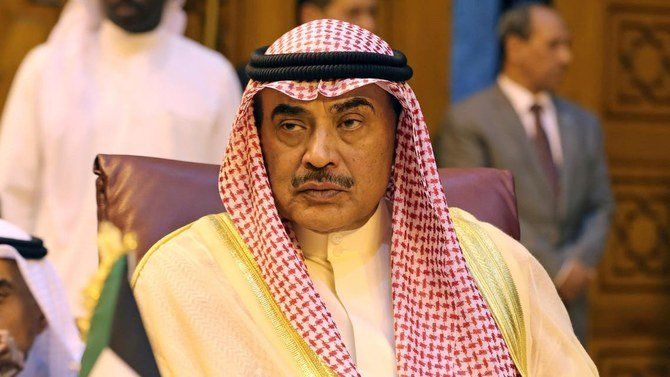 The prime minister of Kuwait has called on Iran to take serious steps to build trust and start a serious dialogue in the Gulf region based on respect for the sovereignty of neighboring nations and non-interference.
He said nations in the region must seek to protect maritime commerce and the free movement of goods and ships in the Arabian Gulf.

Speaking during the 76th session of the UN General Assembly in New York, Sheikh Sabah Khaled Al-Hamad Al-Sabah said such steps will contribute to reducing tension in the region and building ties between the Gulf nations based on cooperation and mutual respect.

“Such measures will reflect the desire of the people of the region to live in a safe, secure and prosperous condition,” he said.

Alluding to the current tussle between Iran and the international community over its nuclear program, Al-Sabah said that the weakness of the anti-nuclear proliferation regime represented a “existential threat to the region.”

In 2015, during the presidency of Barack Obama, Iran signed a nuclear agreement deal with the US, European countries, Russia and China.

The deal, formally known as the Joint Comprehensive Plan of Action (JCPOA), placed restrictions on the Iranian nuclear program in exchange for sanctions relief.

In 2018 President Donald Trump withdrew the US from the agreement, claiming that the deal was not strict enough to limit Iran’s nuclear ambitions. Iran is currently engaged with the US in talks over its nuclear program.

Al-Sabah called for the elimination of weapons of mass destruction from the region and called on Iran to make the region a nuclear-free zone.

On the issue of Yemen, which affects all nations of the Gulf region, including Kuwait, he praised Saudi Arabia’s efforts to end the conflict in Yemen, reiterating Kuwait’s call on all parties to negotiate an end to the civil war.

He said a resolution of the conflict should be based on the Gulf initiative, a reconciliation conference between Yemeni groups and the relevant UN Security Council resolutions.

He condemned the Houthi group for targeting Saudi territories with drone and missile attacks.

“We condemned all the attacks committed against the territories of Saudi Arabia,” he said.

Yemen has been in a state of conflict since 2014, when the Houthi group took control of most of northern Yemen, including the capital, Sanaa.

In 2015 a Saudi-led Arab coalition intervened to restore the legitimate government of President Abd-Rabbu Mansour Hadi.

Al-Sabah stressed Kuwait's support for the Palestinian people and said his country stands behind the Palestinians in seeking the end of the Israeli occupation and the establishment of an independent Palestine in the West Bank and Gaza, with East Jerusalem as its capital.

He also expressed his support for efforts to bring a peaceful resolution to the conflicts in Syria and Libya and to bring security and stability to both countries.

Referring to Kuwait’s success in vaccinating 72 percent of citizens and residents, Al-Sabah said COVID-19 must have been confronted by all nations of the world through cooperation to make different kinds of vaccines and making them available to all countries of the world.
#Donald Trump  #Vaccines  #COVID-19  #Covid