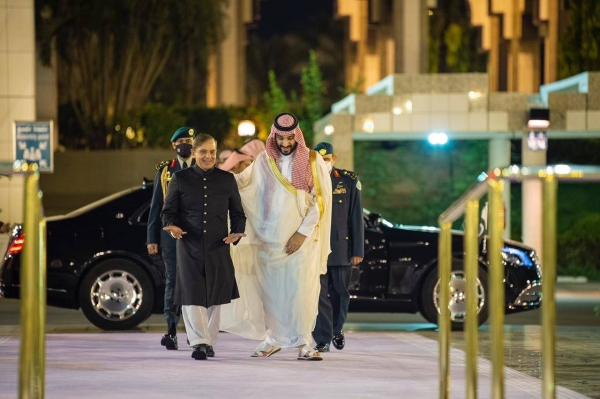 An official reception ceremony was held in honor of the Prime Minister of Pakistan.

An official reception ceremony was held in honor of the Prime Minister of Pakistan.The Crown Prince and Pakistani Prime Minister held a meeting, during which Prince Mohammed welcomed Sherif in the Kingdom.

In turn, the Pakistani Prime Minister expressed his happiness to visit the Kingdom and to meet with the Crown Prince.

During the meeting, they reviewed the fraternal and historical relations between Saudi Arabia and Pakistan. They also discussed the prospects of bilateral cooperation and promising opportunities as well as the ways of developing them in various fields.

The two sides also reviewed all regional and international issues and discussed a number of issues of common interest.

It is noteworthy that the Pakistani Prime Minister visit to Saudi Arabia is considered his maiden foreign trip after being sworn in as prime minister of Pakistan earlier this month.