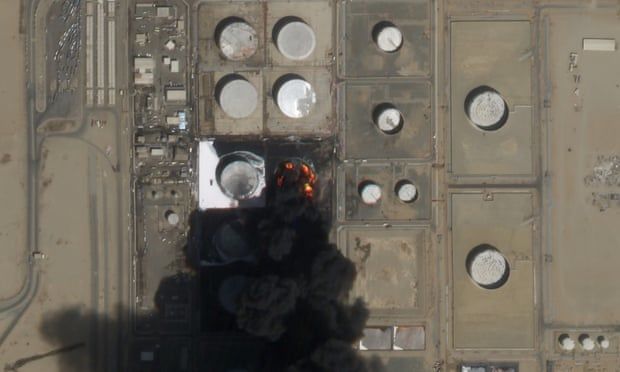 UN chief António Guterres on Saturday condemned an exchange of attacks between Yemen’s Houthi rebels and the Saudi-led coalition, calling for “restraint” on all sides in the seven-year conflict.

“The secretary-general strongly condemns the recent escalation of the conflict in Yemen,” UN spokesperson Stéphane Dujarric said in a statement Saturday.

The wave of rebel assaults included an attack at an oil plant that set off a huge fire near Jeddah’s Formula One circuit during televised practice sessions on Friday.

In response, the Saudi-led coalition launched airstrikes on the capital Sana’a and the port city of Hodeida – a key entry point for humanitarian aid – early on Saturday. The strikes on Sana’a reportedly killed eight civilians, the UN statement said.

The exchange of fire came ahead of the seventh anniversary of a Saudi-led coalition’s military intervention to support Yemen’s government against the Iran-backed Houthis, after they seized Sana’a in 2014.

Earlier on Saturday, Houthi rebels announced a three-day truce with the Saudi-led coalition and dangled the prospect of a “permanent” ceasefire.

Houthi political leader Mahdi al-Mashat appeared on TV to announce the “suspension of missile and drone strikes and all military actions for a period of three days”.

“And we are ready to turn this declaration into a final and permanent commitment in the event that Saudi Arabia commits to ending the siege and stopping its raids on Yemen once and for all,” he said.

There was no immediate response from Saudi Arabia.

Dujarric said the UN chief reiterated “his calls upon all parties to exercise maximum restraint” and to “urgently reach a negotiated settlement to end the conflict”.

The statement also condemned the coalition strikes, which destroyed explosive-laden boats in Yemen, for damaging a UN staff residential compound in Sana’a.

Thousands of people marched in the Yemeni capital on Saturday to denounce the conflict, which has killed hundreds of thousands directly or indirectly, according to the UN, and left millions on the brink of famine.

Mashat said the Huthis were ready to “release all coalition prisoners, including (president Abdrabbuh Mansur) Hadi’s brother, militia prisoners and other nationalities in exchange for the full release of all our prisoners”.

“The Saudi regime must prove its seriousness … by responding to a ceasefire, lifting the siege and expelling foreign forces from our country. And then peace will come and then it will be time to talk about political solutions in a calm atmosphere away from any military or humanitarian pressure.”

Israel, which does not have diplomatic relations with Saudi Arabia, expressed its “sorrow” over the Houthi attack.

“This attack is further proof that Iran’s regional aggression knows no bounds,” prime minister Naftali Bennett wrote on Twitter in a rare public message to the kingdom.