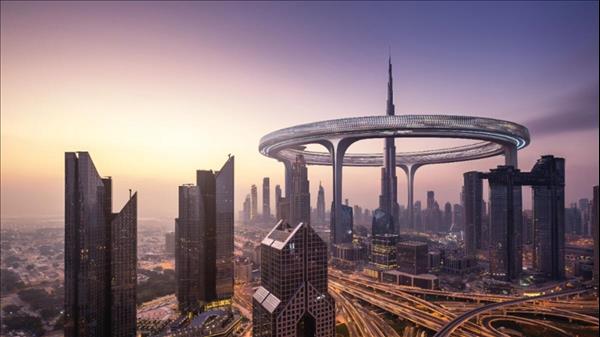 The proposed design will encircle the entirety of the Downtown Dubai and Burj Khalifa neighbourhood in a 500-metre tall giant ring called the Downtown Circle. The structure will have a circumference of three kilometres.

They were designed by Najmus Chowdhry and Nils Remess of the Znera Space; artists' illustrations of the striking design gave the Downtown Area and Burj Khalifa a transformative appeal.

Architects at Znera Space are a group that designs structures that focuses on experimental designs which address socio-economic and environmental issues. The system will be broken down into smaller units containing public, private, and commercial spaces and will be self-sustainable and self-sufficient.

'Like what we see with The Line in Neom, Saudi Arabia, the Downtown Circle is meant to trigger emotions among those who see the designs. We want it to start a conversation about modern architectural possibilities,' explained Chowdhry. The pair created the design amidst the pandemic, challenging the idea of how we live in cities, particularly skyscrapers.

When asked if the structure is scalable, without going into the details of how much it would cost to build a project like the Circle, Chowdhry said, 'It would take time, a lot of manpower, a lot of resources, and a project like this one entails a lot of constriction time and engineering.'

The ring would be supported by five vertical beams or columns 500 meters high. The span of the circle itself would be composed of two main rings held together by a continuous green belt named the Skypark.

'Different natural scenarios and climates are recreated inside the continuous Skypark, forecasting a lively journey to the visitors and residents,' Znera Space on its Instagram page.

'Visitors can experience the canyons, sandy dunes and plants from various floras. Swamps, waterfalls and tropical vegetation or the digital caves, cascades, fruit trees and flowers of various hues and species together enrich the green ecosystem,' the post added.

Moreover, a fleet of suspended peripheral pods would transport passengers from one node to another in the Downtown Circle.

'These suspended vessels travel through a network of rail at the bottom tier to get to their destination,' said Chowdhry. Delivery services would operate a special pad for drones.

The design for Downtown Circle was originally an entry in a design competition launched by the Dubai Future Foundation.

'We submitted the design two years ago and were told that our design has been shortlisted. However, since it's been a while since we heard back from them, we decided to release the illustrations,' he explained.

'We were trying to push boundaries by using architecture as a medium,' said Chowdhry. The duo also believes participating and showcasing competitions designs are necessary for the next phase of evolution in the plan. 'When Covid-19 hit, we thought how were cut off from mobility and the need for more sustainable structure,' he added.