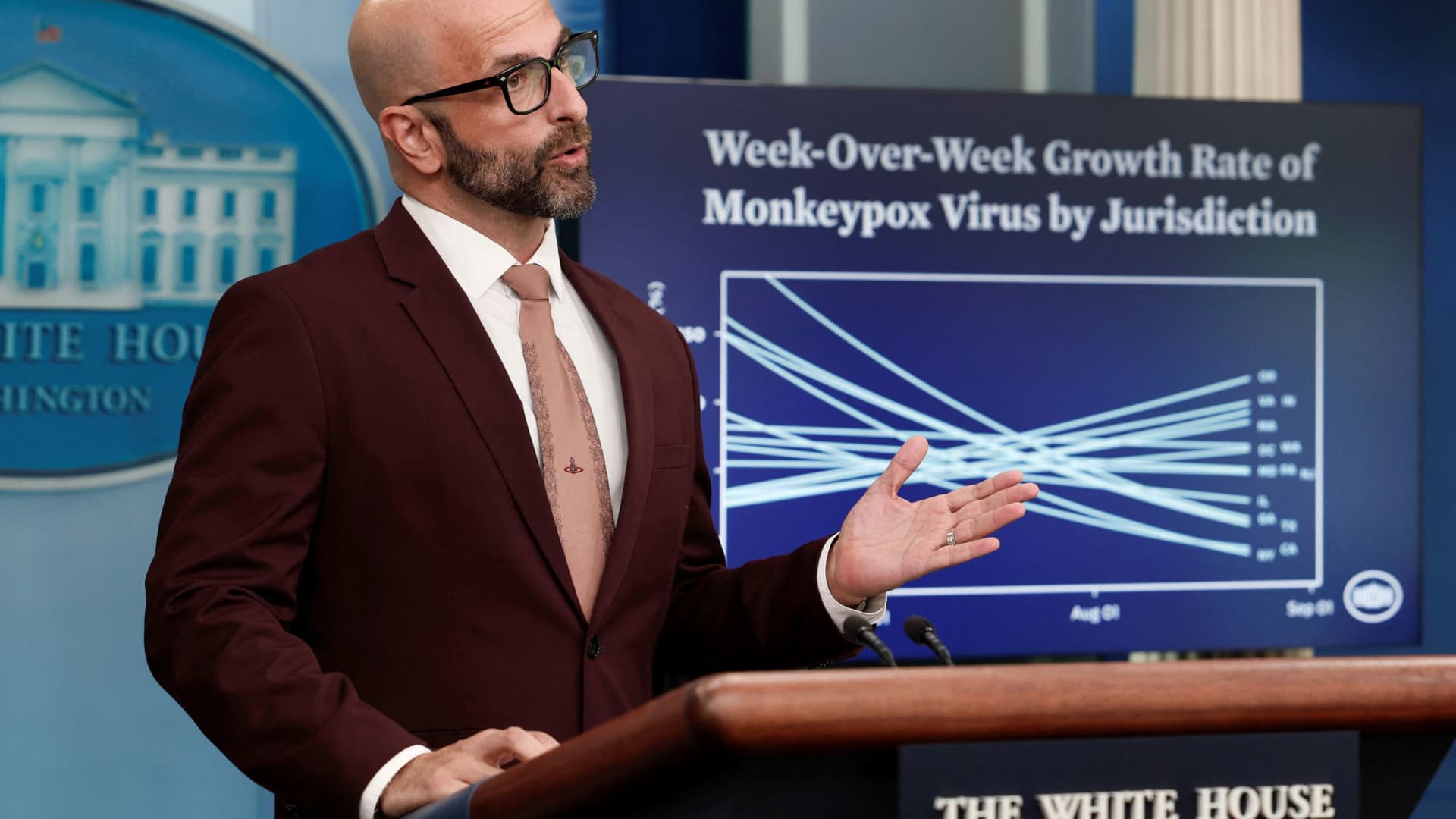 The U.S. monkeypox outbreak is slowing as vaccines have become more available and there’s broader public awareness about what actions individuals can take to lower their risk of infection, according to White House health officials.
Demetre Daskalakis, deputy head of the White House monkeypox response team, said it took 25 days for cases to double in August, down from eight days in July. California, New York, Illinois and Texas have all seen significant declines in new cases over the past month, Daskalakis said.

“The positive trends that we’re seeing in this data also speak to the actions of individuals taken across the country to protect themselves against the virus that includes changing their behaviors and seeking out testing and vaccines,” Daskalakis said.

The U.S. is still battling the largest monkeypox outbreak in the world with nearly 21,000 cases reported across all 50 states, Washington D.C. and Puerto Rico, according to data from the Centers for Disease Control and Prevention.

Monkeypox is primarily spreading during sex among gay and bisexual men, though anyone can catch the virus through close physical contact with someone who is infected or contaminated materials such as towels and bedsheets. The disease is rarely fatal, but causes painful lesions resembling pimples or blisters.

The Biden administration faced criticism over the summer for not moving quickly enough to ramp up vaccine supply to meet the tremendous demand for the shots. Health Secretary Xavier Becerra declared a public health emergency last month, and the Food and Drug Administration authorized a different method to administer the vaccines that allows providers to extract more doses from each vaccine vial.

The Jynneos vaccine, manufactured by Danish biotech company Bavarian Nordic, is the only approved monkeypox vaccine in the U.S. It is administered in two doses 28 days apart, with the peak immune response coming two weeks after the second dose.

The CDC does not yet have real-world efficacy data on the Jynneos vaccine, though public health officials expect it to provide protection against monkeypox.

Vaccine supply has expanded significantly since early August. The U.S. has administered more than 460,000 monkeypox vaccines doses so far, according to data from 35 states provided to the CDC. About 1.6 million gay and bisexual men face the highest risk from monkeypox and have been the primary focus of vaccination efforts.

Daskalakis said the CDC and the White House have been working with organizations in Black and Brown communities to improve vaccine access. Vaccinations were offered on site at Atlanta Black Pride over the Labor Day weekend with 4,000 doses administered, according to Robert Fenton, head of the White House monkeypox response team.

The U.S. is offering vaccinations on site at Pride and other events with high attendance by gay and bisexual men to make the shots more available. More than 3,000 doses were administered at Southern Decadence in New Orleans, according to Fenton. The U.S. is providing 820 doses to Boise Pride and 10,000 doses for California ahead of the Folsom Street Fair and the Castro Street Fair, Fenton said.

Daskalakis said federal health officials are also working with colleges and universities as school gets back into session to inform them about the resources and tools available to address monkeypox in the event that there are infections on campus, though the risk is low.

“The risk in colleges is extremely low,” Daskalakis said. “Realistically, given the way that this virus is spreading through the population, the risk in those settings is low. Awareness is more important than anxiety,” he said.

People who have monkeypox should stay at home until the rash has healed and a new layer of skin has formed, stay away from other people, and do not share any objects or materials with other people, according to CDC guidance.

People who have a new or unexplained rash should avoid sex and social gatherings, particularly those where there’s close skin-to-skin contact, according to CDC. People can also reduce their risk of infection by temporarily limiting sexual partners until two weeks after receiving the second dose of the monkeypox vaccine.
#Vaccines  #vaccine