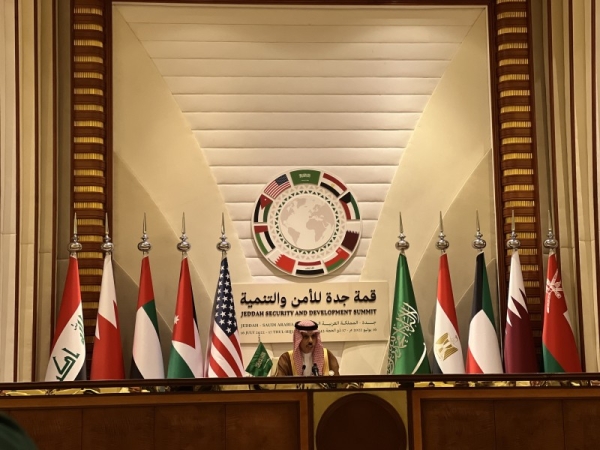 There's no such thing as ‘Arab NATO’: Saudi FM

Saudi Arabia's Foreign Minister Prince Faisal Bin Farhan said on Saturday that there no such thing as an “Arabic NATO.”
Prince Faisal made his remarks during a press conference here following the Jeddah Security and Development Summit, which was held in the presence of US President Joe Biden.

The Saudi minister said that the Kingdom’s hand is extended to Iran to reach normal relations, pointing out that the talks that took place with Iran were positive, but did not reach any results.

He also noted that there were no messages from Iran to the Jeddah Summit, stressing that dialogue and diplomacy are the only solution to Iran’s nuclear programme.

The Saudi minister said that no type of military or technical cooperation with Israel was raised or discussed and that there is no such thing as an “Arab NATO,” reiterating that there was no discussion of a “defensive alliance” with Israel.

Prince Faisal said that the joint Arab action system has reached a stage of “maturity.”

“We know what we want, and we know how to achieve it... We do not wait for anyone to fulfil our needs.”

“We did not discuss the issue of oil production at the Jeddah Summit, and OPEC+ continues its work to assess the markets and what they need,” he said.

“The US remains our main strategic partner, stressing that “the kingdom’s partnership with America is old and continuous... and the agreements we signed with the US did not come to fruition overnight.”

He touched on the decision to open Saudi airspace, stressing that this decision “does not mean any prelude to a subsequent decision.”

“We are working seriously to reach a comprehensive ceasefire in Yemen, and the Houthis must understand that Yemen’s interest is in peace and stability,” he said adding that “Iranian weapons are part of the reasons for the continuing conflict in Yemen.”

“If oil investments are not expanded, prices will rise in the future.”

Regarding the global food crisis as a result of the war in Ukraine, he said: “At the Summit, we discussed the issue of food and grains, and we are working to increase the level of coordination between Arab countries to ensure food security.”
#Joe Biden