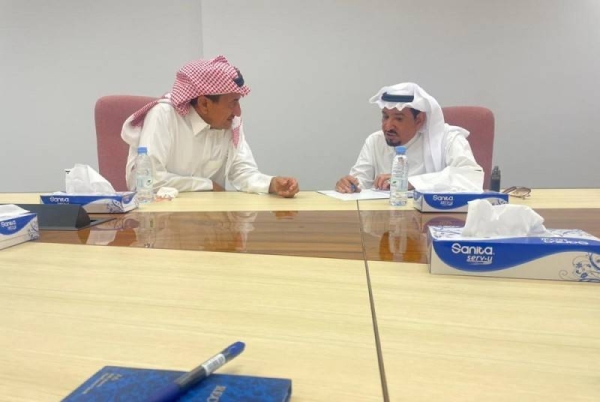 Turki Al-Sheikh, chairman of the Board of Directors of the General Entertainment Authority (GEA), announced the return of the popular Arab satirical comedy Tash Ma Tash series to Saudi households during the next Ramadan, which begins in the last week of March 2023.
He said the production and broadcasting of the hit comedy series that won hearts of Saudis for several years will be supported by GEA and will be aired on MBC channel.

The Saudi duo -Abdullah Al-Sadhan and Nasser Al-Qasabi, the most renowned actors of the series, will once again appear on the most famous Saudi comedy series.

During the launch of the GEA strategy in January of 2019, Turki Al-Sheikh announced the return of Al-Sadhan and Al-Qasabi in a huge work that would bring them together, as it constituted one of the most prominent surprises at the time. However, the project was delayed due to the outbreak of the coronavirus pandemic.

Tash Ma Tash (No big deal) was a popular Saudi satirical comedy that ran for 18 seasons and is considered one of the most successful television works in Saudi Arabia and the Arab world. The show satirizes regional social, cultural, and legal matters and incidents that were found within Saudi Arabia. The hit comedy series was a staple in every Saudi household during Ramadan between 1993 and 2011. It has had an enduring influence on Saudi television productions and gained popularity worldwide with its insight into contemporary social issues.

The show ran over 18 seasons and starred Al-Sadhan and Al-Qasabi and a further 109 renowned actors and actresses from the Kingdom, Jordan, Syria, Iraq, Egypt, and Lebanon. Several leading directors from the Arab world were involved in its production, including the late Saudi director Abdul Khaleq Al-Ghanim, who directed 13 seasons.

The series followed a sketch comedy format. It started airing in 1993 on the Saudi Television channel 1 for 13 seasons before moving to MBC in 2006. In 2008, its production was stopped, and an alternative was shown to the series “We are all children of a village" to continue screening until 2011. New episodes ran exclusively during Ramadan right after sunset.

The idea of the series started through the artists Abdullah Al-Sadhan and Nasser Al-Qasabi, and directed by Amer Al Hamoud. After the first two seasons, the trio separated to be the duo Al-Sadhan and Al-Qasabi in cooperation with the director Abdul Khaleq Al-Ghanem.

The show consists of episodic comedy sketches that present social commentary on Saudi society. Every episode has a new story and characters, though popular characters tend to reappear in new storylines. Most episodes poke fun at the flaws of Saudi society while others show a tendency for dark comedy and melodrama. The show was one of the pioneers of self-criticism in the Saudi media, with the episodes often dealing with sensitive topics such as social aspects, culture, marital relations, and religion.
#Coronavirus