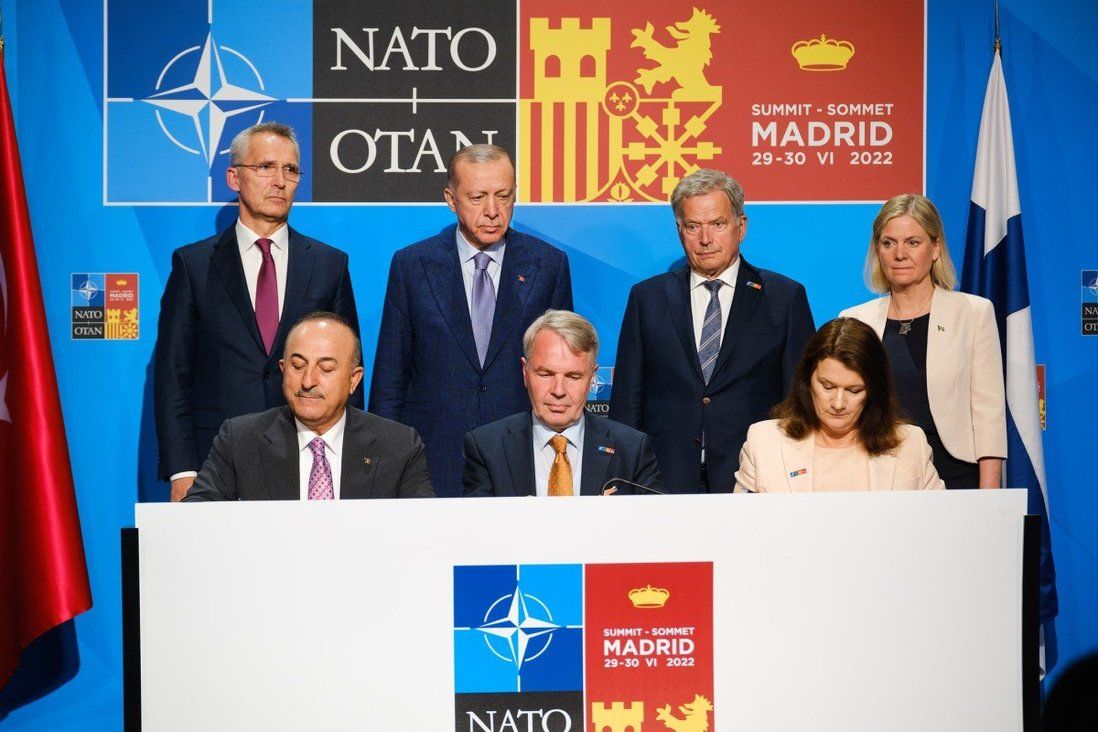 Invasion of Ukraine has prompted Sweden and Finland to abandon their nonaligned status – Türkish president objected to their stance on Kurdish rebel groups his country considers terrorists.
Türkiye agreed on Tuesday to lift its opposition to Sweden and Finland joining Nato, a breakthrough in an impasse clouding a leaders’ summit in Madrid amid Europe’s worst security crisis in decades triggered by the war in Ukraine.

After urgent top-level talks, alliance Secretary General Jens Stoltenberg said “we now have an agreement that paves the way for Finland and Sweden to join Nato”, calling it “a historic decision”.

Among its many shattering consequences, President Vladimir Putin’s invasion of Ukraine has prompted Sweden and Finland to abandon their long-held nonaligned status and apply to join Nato as protection against an increasingly aggressive and unpredictable Russia – which shares a long border with Finland.

Under Nato treaties, an attack on any single member would be considered an attack against all and trigger a military response by the entire alliance.

After weeks of diplomacy and hours of talks on Tuesday, Finnish President Sauli Niinistö said the three countries’ leaders had signed a joint agreement to break the logjam.

Türkiye said it had “got what it wanted” including “full cooperation … in the fight against” the rebel groups.

Stoltenberg said leaders of the 30-nation alliance will issue a formal invitation to the two countries to join on Wednesday. The decision has to be ratified by all individual nations, but he said he was “absolutely confident” Finland and Sweden would become members, something that could happen within months.

Türkiye hailed Tuesday’s agreement as a triumph, saying the Nordic nations had agreed to crack down on groups that Ankara deems national security threats, including the Kurdistan Workers’ Party, or PKK, and its Syrian extension.

It said they also agreed “not to impose embargo restrictions in the field of defence industry” on Türkiye and to take “concrete steps on the extradition of terrorist criminals”.

Swedish Foreign Minister Ann Linde told reporters that “all the parties showed an incredible willingness to get there and were constructive and we made it clear that we take these concerns about terrorist attacks … seriously”.

Türkiye, in turn, agreed “to support at the 2022 Madrid Summit the invitation of Finland and Sweden to become members of Nato”.

Amid speculation about a US role in ending the deadlock, a senior administration official said Washington did not offer any concessions to Türkiye to coax it to accept a deal.

But the official said the US played a crucial role in helping bring the two parties closer together, and President Joe Biden spoke with Erdogan Tuesday morning at the behest of Sweden and Finland to help encourage the talks.
#Joe Biden