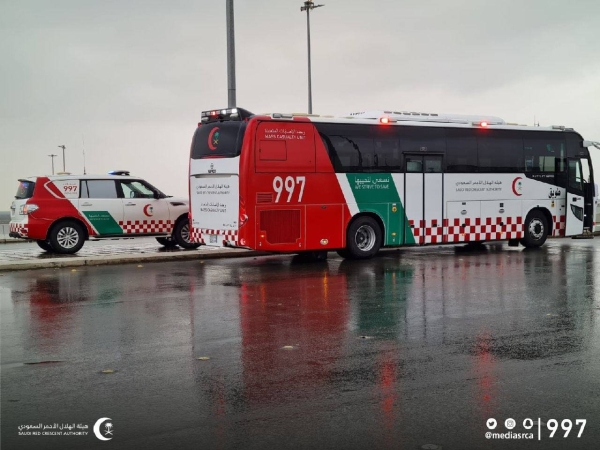 The Saudi Red Crescent Authority (SRCA) transferred 458,449 people, including critical patients and others who have sustained injuries as a result of road accidents, fires, drowning, violence, fighting and other causes, to hospitals in various regions of the Kingdom in the past year. This was revealed in a report released by the Ministry of Health for the year 2021-2022, Al-Watan newspaper reported.
The Makkah region topped in the number of patients, including emergency cases, as well as cases of road accidents, drowning, violence, and clashes, transferred to hospitals by the authority during the period.

The number of emergency cases decreased in Al-Baha region to 7902, followed by Al-Jouf region with 7890 cases, and Najran with 6490 cases, while the Northern Border region recorded the lowest number with 5338 cases.

There were a total 341 drowning cases attended by the Red Crescent personnel in various regions of the Kingdom, according to the report. The Makkah region topped other regions in terms of drowning cases that were transferred to hospitals by the Red Crescent. There were 95 cases in Makkah and it was followed by the Riyadh region with 65 cases, the Eastern Province (54), the Jazan region with 23 cases, Madinah (21), Tabuk (20), Qassim (16), Asir (15), and Hail (10) cases.

According to the report, the Makkah region topped other regions in the number of road accidents attended by the SRCA volunteers during the period. Makkah region accounted for 18101 accident cases, followed by the Riyadh region with 17573 cases, the Eastern Province (7943), Asir (7288), and Madinah (4784).

The Makkah region was also on top in cases of burns attended by the SRCA staff. The region reported 564 burns and was followed by Riyadh with 428 cases, Eastern Province (312), Madinah (144), and Asir (139).

The Saudi Red Crescent transferred patients suffering from various diseases to hospitals. The Makkah region topped in the number of patients (10,0781) during the period, and Riyadh came second with 85170 cases. The Eastern Province came third with 38983 cases, and it was followed by the Madinah region (27187), and Asir (23162).

The authority transferred people who sustained injuries due to falls to hospitals in various regions of the Kingdom. The Riyadh region came first with 7361 cases, followed by Makkah with 7247 cases, Eastern Province (3461), Madinah (2274), and Asir (1983).

The authority staff attended to several cases of violence and fighting and transferred people who sustained injuries to hospitals. There were 3805 such cases in the Makkah region, 2607 in Riyadh, 1339 in the Eastern Province, 1033 in Madinah, and 990 in the Asir region.