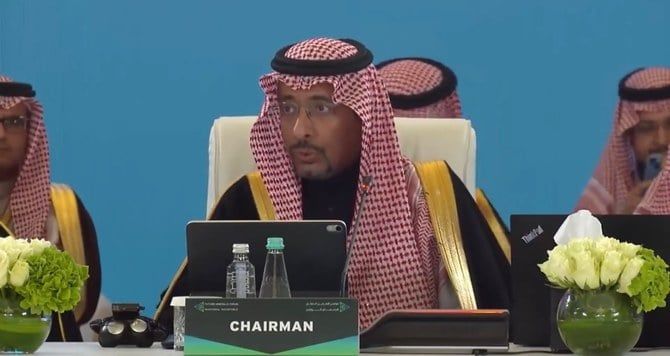 Saudi Arabia’s success in attracting a record amount of investment of $32 billion last year is merely the starting point of the potential impact of the Future Minerals Forum taking place in Riyadh, the Minister of Industry and Mineral Resources said at the event's opening.
Bandar Alkhorayef used his welcomed address to present evidence of tangible results from last year’s gathering to convey optimism towards the second FMF.

The accomplishments include de-risking investments in mining exploration, production and processing, growing value chains in gold, phosphate and aluminum, as well as beginning to develop an electric vehicle ecosystem.

In addition, Saudi Arabia “initiated the first auctions for sites on the Arabian Shield, attracting about 20 participants from around the world, bidding on our digital platform,” Alkhorayef said.

He added: “But we cannot go it alone. None can.”

Global mining leaders have come together to discuss the vital governmental roles in Africa, Western and Central Asia as catalysts for change to create a responsible and sustainable future.

In the FMF, more than 60 countries are represented to “focus on solutions to accelerate net-zero transition and strengthen economic development through minerals and metals,” he said.

Leaders will discuss decarbonization in addition to minerals and metals supply and value chains which are capable of satisfying global demand and thus managing global disputes.

The development of minerals and metals in the region is crucial to form robust communities and enhance the balance of trade between this region and the rest of the world.

“It is undeniable that the world needs more minerals and metals. The World Bank says that extraction of energy transition minerals will need to increase five-fold by 2050 to meet demand for clean energy technologies.”

Alkhorayef went on to emphasize the large potential of the Africa, Western and Central Asia region in becoming a key bridge in the global transition.

Since it possesses almost half of the global population and only contributes 11 percent to global gross domestic product, it shows ample room for growth.

“This points to the high potential for the nearly 80 countries that make up the region, and a possibility to be a game changer in terms of optimizing technology, community engagement and responsible practices as a new industrial revolution begins,” he said.

Alkhorayef also stressed the importance of trust of all stakeholders involved, including upstream, midstream and downstream, as well as the vitality of collaborating together as a region.

The Future Minerals Forum is being held in Riyadh from Jan. 10 to Jan. 12, with an estimated 200 speakers from around the world expected to attend the event.

The summit is set to tackle several topics, including sustainability, the future of mining, energy transition, the contribution of minerals to the development of societies, digital transformation, and integrated value chains.

The second edition of the FMF comes as Saudi Arabia’s mining sector is witnessing a rapid transformation and is attracting investors from around the globe.

According to geological surveys dating back 80 years, the Kingdom is thought to have an estimated reserve of untapped mining potential valued at $1.3 trillion.

However, with the prices of valuable minerals, especially gold, copper and zinc rising, the true value of the Kingdom’s current mineral wealth could be double that figure, CEO of the Saudi Geological Survey Abdullah Al-Shamrani said in September 2022.