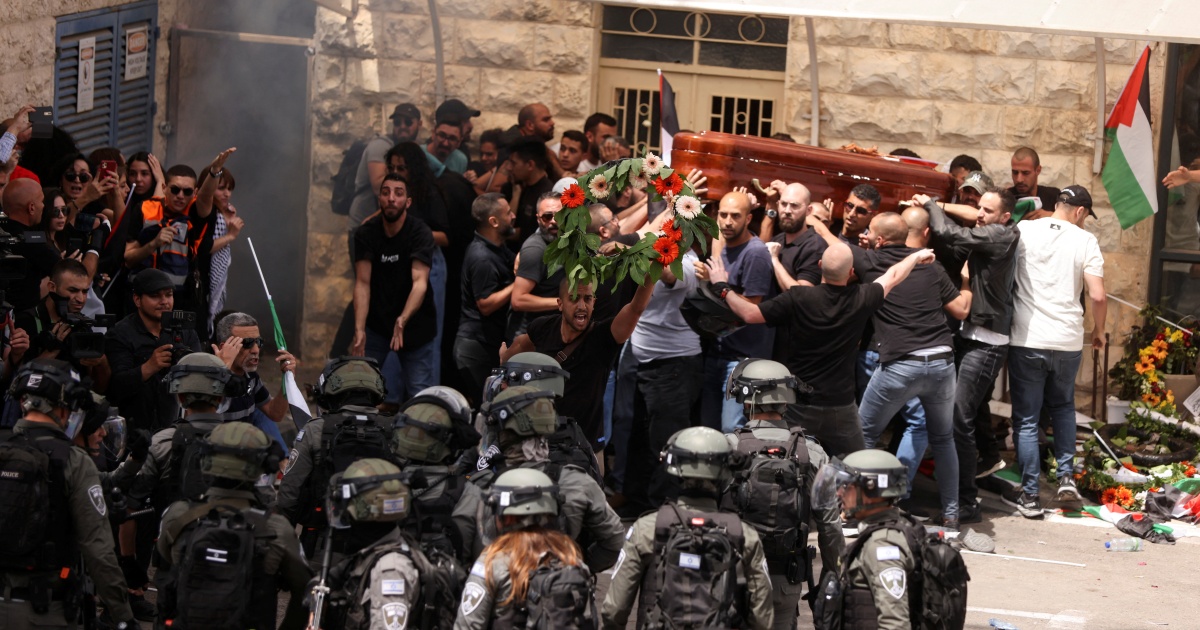 The Palestinian Authority rejects Israeli role in investigation as Israel announces probe into attack on the funeral of the slain Al Jazeera journalist.

Israel has ordered an investigation into the conduct of its officers who attacked pallbearers at the funeral of Shireen Abu Akleh in the occupied East Jerusalem, as the Palestinian Authority said it welcomes international support in investigating the murder of veteran Al Jazeera journalist.

Senior Palestinian official Hussein al-Sheikh said on Saturday that the PA, which has described Abu Akleh’s killing as “an assassination by Israeli forces”, would welcome the “participation of all international bodies in the investigation”.

“The Israel Police Commissioner in coordination with the Minister of Public Security has instructed that an investigation be conducted into the incident,” the police said in a statement on Saturday.

They had coordinated funeral arrangements with the journalist’s family but “rioters tried to sabotage the ceremony and harm the police,” it said. Findings will be presented in the coming days.

The shocking scenes at the funeral, and the death of the 51-year-old Palestinian-American journalist, drew worldwide condemnation and calls for investigations, including the United Nations.

A sense of grief and outrage

The attack on the funeral added to a sense of grief and outrage that has followed the death of Abu Akleh, a veteran journalist and a household name across the Arab world.

The White House was muted in its response, as it stopped short of condemning Israeli action. Earlier, Secretary of State Antony Blinken said the US was “deeply troubled to see the images of Israeli police intruding into her funeral procession”.

The European Union condemned what it said was the “disproportionate use of force” by the Israeli police.

In a rare, unanimous statement, the UN Security Council condemned the killing, calling for “an immediate, thorough, transparent, and impartial investigation”, diplomats said.

Al Jazeera has said Abu Akleh was “assassinated in cold blood”. She had been wearing a helmet and a bulletproof vest marked “Press” as she was covering the Israeli military operation in Jenin.

The United States, European Union and United Nations have backed calls for a full investigation into her killing.

Israel initially suggested Palestinian fire might have been to blame, but officials have since said they could not rule out it was Israeli gunfire that killed her. Reports have emerged that Israel is investigating the likelihood that one of its soldiers shot her during a raid in the occupied West Bank city of Jenin.

Israel has publicly called for a joint probe, which the Palestinian Authority has rejected.

Palestinian Authority President Mahmoud Abbas said he would not accept Israel’s participation in the investigation into the killing of the Al Jazeera journalist.

“We will continue the investigation and will in no way allow Israel to be a partner in this investigation because they are killers and they are the ones who killed her,” Abbas assured an Al Jazeera delegation on Saturday.

Tensions remain high as the Palestinians commemorate Nakba or “the Catastrophe” to mark the ethnic cleansing of more than 700,000 Palestinians from their homeland in 1948, which coincides with the creation of Israel.

New violence erupted on Friday in the West Bank, including a raid and clashes around the Jenin refugee camp.

Tensions have risen in recent months as Israel has grappled with a wave of attacks, which has killed at least 18 people since March 22.

More than 20 Palestinians have been killed since the end of March, according to the Palestinian health ministry.