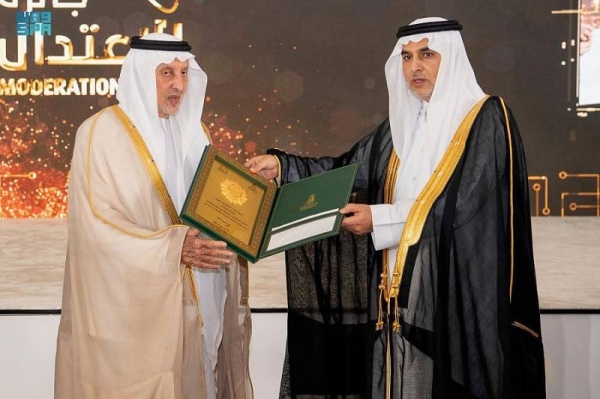 Prince Khaled Al-Faisal, emir of Makkah, advisor to Custodian of the Two Holy Mosques and chairman of the Board of Trustees of the Moderation Award, honored Dr. Abdullah Al-Ghamdi, president of the Saudi Data and Artificial Intelligence Authority (SDAIA) who won the sixth edition of the Moderation Award, on Wednesday.
Dr. Al-Ghamdi was picked for the prestigious award in recognition of his outstanding contributions in the field of technology with a focus on highlighting the civilized face of Saudi Arabia, as well as harnessing technology to promote the values of moderate humanitarian work for members of society, in addition to upgrading the values of national belongingness among individuals and institutions.

Speaking on the occasion, Dr. Al-Ghamdi thanked Prince Khaled Al-Faisal and the award committee for choosing him for the prestigious honor. He reiterated his resolve to continue work, redouble efforts and do good deeds in serving fellow human beings, the country and the world as a whole to promote the sublime values of moderation.

Commenting on the honor, Dr. Al-Ghamdi said that SDAIA has contributed to the acceleration of the digitization journey until the Kingdom ranked third in the world and first regionally in the Digital Government Index for the year 2022.

He noted that the authority embarked on its first mission under the guidance and inspiration from Crown Prince and Prime Minister Mohammed bin Salman, and that was to build a national data bank, which in turn has become the basis for all national digital solutions that were launched successively. “The world happened to be standing in front of a great challenge to tackle the coronavirus pandemic, and that was only a few months after the founding of SDAIA. Saudi Arabia had a historical position and a message of moderation to the world that humans are first during this period, and then we found ourselves in SDAIA shouldering a national humanitarian duty to contribute to finding innovative solutions to contain the pandemic,” he said.

Dr. Al-Ghamdi said that, with the grace of God, and then with the efforts of the sincere citizens, the Tawakkalna platform was launched. “This platform was one of the first global solutions that enabled everyone who lives in this country to return to normal life regardless of their age, gender, or nationality, and hence the platform had won the United Nations Award for the Innovative Responses to the Coronavirus Pandemic,” he said.

Dr. Al-Ghamdi added: “During the pandemic, in view of the inability of officials and employees to reach their workplaces, the Brooq platform was launched for safe visual communication to continue the government work, and through it more than 30,000 local and international meetings were held, the most prominent of which was the extraordinary G20 summit meet to tackle the challenges of the pandemic.”

Dr. Al-Ghamdi said that during the pandemic, the Ehsan platform for charitable work was launched in its drive to highlight the meanings of human solidarity. The platform has been instrumental in providing aid and assistance worth more than SR2.8 billion to nearly five million beneficiaries inside and outside the Kingdom in less than two years.

In its bid to enhance the meanings of moderation globally and in response to the call of the Crown Prince at the World Summit on Artificial Intelligence, SDAIA, in cooperation with the International Telecommunication Union, launched the Artificial Intelligence Readiness Initiative to help countries of the world to adopt and share best practices to harness artificial intelligence for the good of humanity.

He said that SDAIA launched, in association with the World Bank, a global initiative to help developing countries employ artificial intelligence to combat ignorance, poverty and disease, and harnessing it for the good of humanity thanks to the generous support of the wise leadership.

Dr. Al-Ghamdi revealed that SDAIA also launched, together with Google Cloud, a program to empower women in the field of artificial intelligence to obtain job opportunities in this vital field, and activate their talents to contribute to the betterment of humanity.

The Moderation Award, the first of its kind in the Kingdom, comes as one of the most important initiatives of the Prince Khaled Al-Faisal Institute for Moderation at King Abdulaziz University to renounce extremism and promote a culture of moderation, which is the approach taken by Saudi Arabia in all aspects.