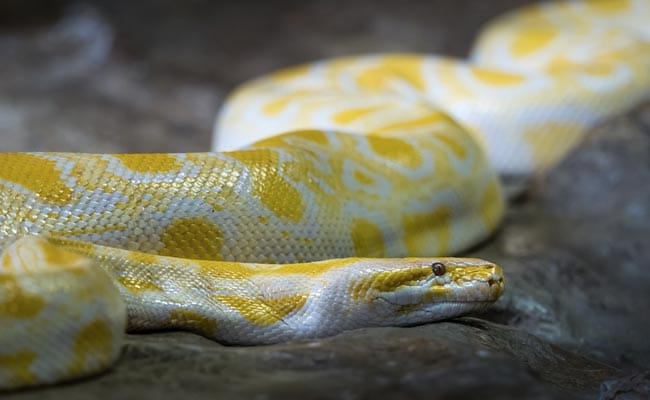 Hunting Pythons In Florida, For Profit And Therapy

When not working at his job staging cultural events in Miami, 34-year-old Enrique Galan spends his time tracking down the nocturnal reptiles from Southeast Asia.

Enrique Galan is seldom happier than when he disappears deep into the Everglades to hunt down Burmese pythons, an invasive species that has been damaging Florida's wetland ecosystem for decades.

When not working at his job staging cultural events in Miami, the 34-year-old spends his time tracking down the nocturnal reptiles from Southeast Asia.

He does so as a professional hunter, hired by the Florida Fish and Wildlife Conservation Commission (FWC) to help control the python population, estimated to be in the tens of thousands.

At night, Galan drives slowly for miles on paved roads and gravel tracks, his flashlight playing on grassy verges and tree roots, and the banks of waterways where alligator eyes occasionally glint.

But on this August night, he has an extra motivation.

The FWC has been holding a 10-day python-hunting contest, with 800 people participating. The prize is $2,500 for whoever finds and kills the most pythons in each of the categories -- professional and amateur hunter.

And Galan would love to win that money to celebrate the arrival of Jesus, his newborn baby.

Burmese pythons, originally brought to the United States as pets, have become a threat to the Everglades since humans released them into the wild in the late 1970s.

The snake has no natural predators, and feeds on other reptiles, birds, and mammals such as raccoons and white-tailed deer.

"They're an amazing predator," says Galan in admiration.

Specimens in the Everglades average between six and nine feet long, but finding them at night in the wetland of more than 1.5 million acres (607,000 hectares) takes skill and patience.

Galan has a trained eye, as well as the courage and determination needed for the job. After two unsuccessful nights, he spots a shadow on the shoulder of Highway 41: he jumps out of his truck and lunges at the animal, a baby Burmese python.

Grabbing it behind the head to avoid being bitten, he puts it in a cloth bag and ties it with a knot. He will kill it hours later with a BB gun.

A few miles further on, a huge python slithers across the tarmac. Galan again bolts from his truck but this time the snake escapes into the grass, leaving behind a strong musky scent, a defense mechanism.

Galan took an online training course before hunting pythons, but says he learned everything he knows from Tom Rahill, a 65-year-old who founded the Swamp Apes association 15 years ago to help war veterans deal with traumatic memories through python hunting.

For a few hours, Rahm Levinson, an Iraq war veteran suffering from post-traumatic stress disorder, hunts with Rahill and Galan.

"It really helped me through a lot of stuff struggling at home," he said.

"I can't sleep at night and having someone to go out at 12 o'clock, two o'clock in the morning, and catch pythons is something productive and good."

Galan is proud to participate in a project that has eliminated more than 17,000 pythons since 2000.

"One of the best things that I get out of it is the amount of beauty that I'm just surrounded by. If you just look closely, open your eyes and observe, you'll see a lot of magic here."