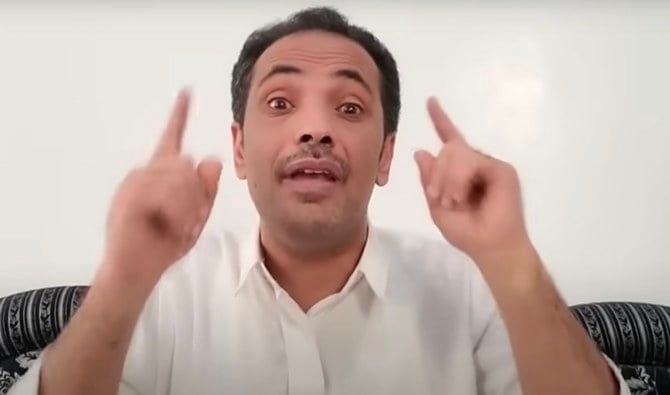 Yemeni social media activists in Houthi-controlled Sanaa said that the Iran-backed militia has kidnapped a prominent YouTuber off a Sanaa street days after he sharply attacked them on social media.
Ahmed Hajar, a well-known Yemeni comedian, actor and YouTuber was strolling last week along Al-Zubairi street in Sanaa when he was kidnapped by armed men in civilian clothing driving a bus and taken to an unknown destination.

The news of his disappearance spread over the weekend after his relatives reported him missing.

The Houthis did not claim responsibility for the kidnapping, but their leaders and sympathizers on social media condemned Hajar for inciting the populace against the movement.

Hajar’s abduction has prompted considerable sympathy for him and indignation over the militia’s suppression of free speech and dissidents.

Hajar uploaded a 10:22-minute video on YouTube last week in which he criticized the Houthis for excessive taxation, extensive corruption, the destruction of the educational system and the inability to pay public workers.

“Houthi Ansar Allah! Every Yemeni inside and beyond Yemen is protesting about you …People say that you are criminals, fraudsters and losers and that you came to (Sanaa) to steal, plunder and take vengeance,” Hajar remarked in the Sanaani dialect, using a scathing tone.

Hajar, who has 214,000 YouTube subscribers and 68,598 Facebook followers, stated that the public — including bakery owners, taxi drivers, grocery store owners and even wealthy people — urged him to post a video expressing their complaints about fleecing charges and taxes, hunger and the militia’s indifference to the suffering of the people.

“People are hungry and looking for food while also trying to save enough for their children’s private school education. You have ruined education,” he said, warning the Houthis that increasing animosity toward their movement will lead to a revolt. “The people will explode.”

The video has received over 8,000 comments and thousands of likes on YouTube and has been extensively shared on other social media sites. It garnered even greater media and public attention when Hajar’s family reported him missing.

Along with overwhelming support for the victim, the kidnapping has spurred influential people in Sanaa to condemn the movement for abducting Hajar and disregarding public demands that it combat corruption, solve rising inflation and improve public services.

Ahmed Elaw, a Sanaa-based figure with 786,00 YouTube subscribers, demanded that the Houthis acknowledge the spread of corruption and famine and cease their persecution of dissenting voices.

“He is speaking about the country and criticizing its domestic affairs,” Elaw said, referring to Hajar. “He is telling the truth, which you reject.

“People are starving. People cannot afford to purchase yogurt and are eating rubbish. We won’t remain quiet. Put us in prison and shoot us to death.”

Yemenis from all walks of life, including some of the movement’s supporters, decried the YouTuber’s kidnapping and demanded his immediate release.

“This man is equivalent to a thousand men, and we must support him with all our might,” Saddam Ahmed commented on the video.

Mohammed Al-Mahdi, adviser to the Ministry of Culture, said that what Hajar disclosed about the situation in Sanaa and other Houthi-controlled regions is just the tip of the iceberg.

“This video illustrates a portion of the deplorable reality in their regions and demonstrates the disdain people have for them and their practices,” Al-Mahdi tweeted.

As with many other similar arrests of opposition figures, the Houthis did not formally state that Hajar was abducted. Nonetheless, their followers and even authorities on social media viciously attacked the man, accusing him of undermining the sacrifices of their warriors and assisting their adversaries.

Abdulkader Al-Murtada, head of the Houthi prisoner exchange committee, hinted at their involvement in the kidnapping of Hajar by stating the movement would not accept critics against it and its warriors.

“Making arbitrary accusations against individuals in general and ridiculing the sacrifices made by the Yemeni people against the aggression is a hazardous practice,” he said on Twitter.
#Facebook