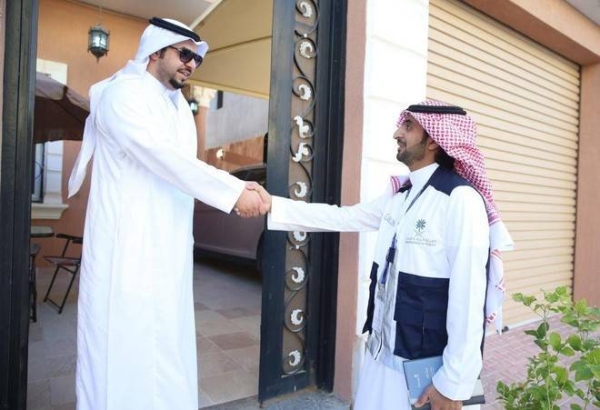 The General Authority for Statistics (GASTAT) reaffirmed that the Saudi Census 2022, which kicked off on May 10, does not aim either to track down violators of residency laws or monitor legal violations. The authority regulations also prohibit sharing of personal data with any third party.

GASTAT has clarified that the average time an individual can take to fill up the census form is 30 minutes. The form contains 50 questions, including the actual location of housing, health and educational status, languages spoken by family members, features of housing and the services available there.

The actual period for headcount is 36 days, during which every individual who is alive within the Kingdom’s borders is counted at a specific time and date.

According to the authority, the census targets all heads of families and individuals who are permanently residing in the Kingdom, including violators of residency regulations, to take part in the census.

It aims to cover all residents of the Kingdom regardless of the status of their identification papers. However, visitors for the purpose of Hajj, Umrah or tourism will not be covered in the census.

Enumerators will also collect information about housing units, both inhabited and uninhabited, which may not be covered by the national postal address.

The GASTAT unveiled that there are five salient features for the census of 2022. They include the use of modern technologies in the application of census work; satellite images to ensure more comprehensive coverage of various Saudi regions; identification of unregistered housing units in the national addresses; and the development of a data collection mechanism to include self-enumeration, which is a new means of data collection.

This mechanism is available through the authority’s portal to all individuals. Finally, updating the census form would serve the decision-makers in accordance with the best international practices.

The authority stated that implementation of the census is important because its outputs are integrated with the data in Absher, Tawakkalna and other portals as the census links population data with their actual places of residence, and adds other data to it, such as the type of housing and health status of each individual, and other data that have not been updated since the 2010 census.

The GASTAT had carried out a trial-run enumeration in September 2021, covering seven cities across Saudi Arabia, including Riyadh, Makkah, Madinah, Tabuk, AlUla, Asir, and the Eastern Province. It included numbering of buildings and its components of housing units and families.

The trial-run enumeration has also included counting the population in labor camps and public housing to identify their demographic, social and economic characteristics.

The authority prepared the executive plan, after a comprehensive study of the requirements of government agencies benefiting from the results of the census. It is also based on the best international population census models and standards that are in force in the G20 countries as well as in the member countries of the Organization for Economic Cooperation and Development (OECD).

As per the time bound census plan, the study and analysis of the census data will be carried out in July and August after finishing the actual headcount in May and June. Dissemination of census reports to all members of the community will be made in September and October.

The census data collection channels include the phases of enumerators’ visit to the residences; self-enumeration by filling out the census form electronically; and self-enumeration through Saudi Census 2022 kiosks in major areas around the Kingdom.