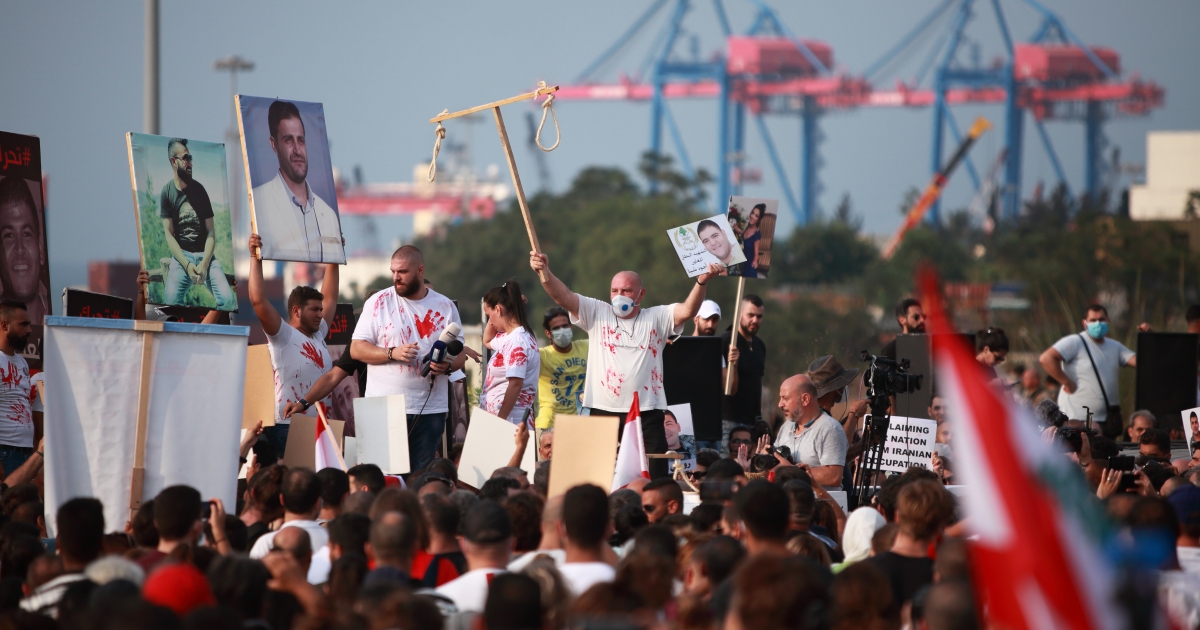 Thousands of people gathered in remembrance of the Beirut Port explosion that devastated the capital two years ago and killed more than 200 people, with demonstrators calling for those responsible to be held accountable.

One of three marches held across the city commenced at the fire station in Karantina, a neighbourhood situated directly next to the port, where families held white coffins with the names of 10 firefighters who died.

The firefighters were sent to control a blaze that broke out at a warehouse in the port, which set off the explosion of ammonium nitrate, without knowing they were being sent to their deaths.

Tatiana Hasrouty, 21, was at the front of the march, helping to hold a giant Lebanese flag. Her father had worked in the operations centre of the port silos for 38 years before being killed in the explosion. It took search teams 14 days to find his body.

“We know that this state is corrupted and this state did this crime: they killed our parents, they broke our homes, they are the ones that are guilty,” Hasrouty told Al Jazeera, speaking of Lebanese officials.

“It’s really important to apply pressure on this ruling state because they’re still in power … Nothing can scare us – no militia, no president, no one can scare us,” she said, noting the people recently re-elected to parliament who have been charged in the local investigation and have arrest warrants against them. 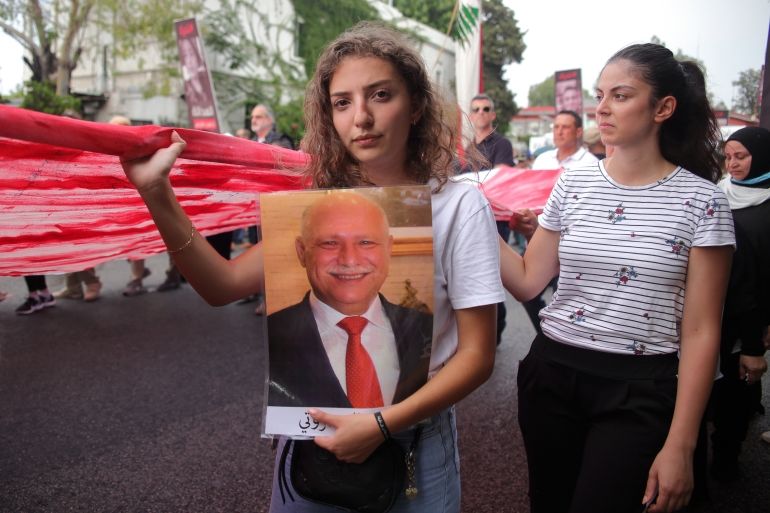 Tatiana Hasrouty, 21, is demanding international action to bring a UN fact-finding mission to Lebanon in order to hold people accountable for the death of her father, who was killed in the explosion

Following a fire that broke out in one of the port warehouses, 2,750 crates of poorly stored ammonium nitrate exploded on August 4, 2020, injuring at least 7,000, leaving more than 150 people with permanent disabilities, and displacing more than 300,000 people.

A group of families under the name August 4 Collective started their march from the Justice Palace before continuing to the French embassy to ensure their voices were heard in Paris, as French President Emmanuel Macron is allegedly blocking a United Nations fact-finding mission to Lebanon.

The collective then passed by the Samir Kassir building in downtown Beirut “to send a message of solidarity to all the people facing injustices in Lebanon, because the Lebanese people are facing injustice every day”, said Paul Naggear, father of three-year-old Alexandra, who was killed in their home by the blast.

Before the marches could even reach the port, a cloud of dust bloomed into the sky as another two silos collapsed after having been on fire for three weeks, because the grain left in place since the explosion was ignited by the summer heat.

Four silos collapsed last Sunday and up to another eight could fall at any minute.

The families of the victims have been protesting government attempts to tear down the remaining silos in order to not erase the memory of August 4 and to leave evidence in place. 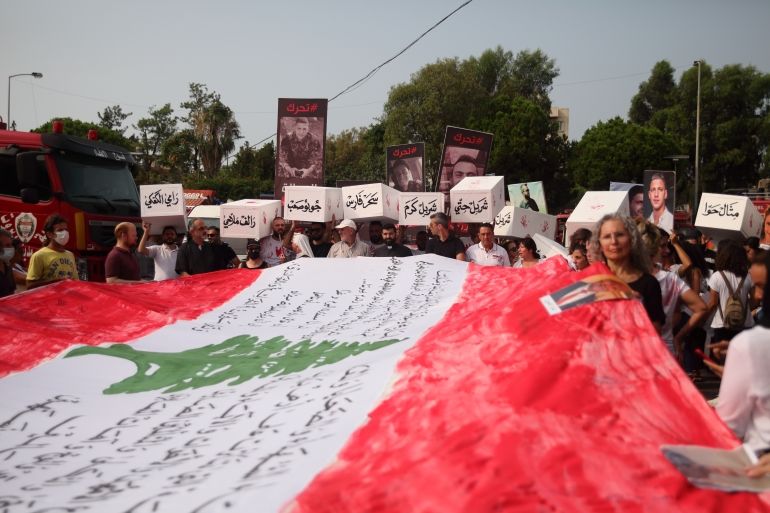 Mireille Bazergy Khoury – the mother of Elias Khoury, who was only 15 when the walls of his bedroom came crashing down on him after the explosion – told Al Jazeera that nothing had been done to stop the fire raging at the silos, worsening the situation.

“These silos are very important to us … there are some families who still hope to find parts of the bodies of their children under there,” Khoury said.

The names of 241 people killed were read out in front of the port, echoing across the buildings destroyed at 6:07pm, the time the explosion occurred, as ambulance sirens rang out.

Some revolution chants were heard among the crowd before an oath was made, prompted by families speaking on stage, to never surrender until justice is found by those in power.

Two years on, families are still tirelessly fighting for justice as a local investigation into the explosion has been stalled by Lebanese politicians who have been charged or called in for questioning.

The evidence that has already emerged from investigations by rights groups, journalists, and Lebanese judges strongly suggests that high-ranking officials in government and the security forces knew about the risk from the ammonium nitrate stockpile and tacitly accepted it.
Families demanded

“We are stressing that we need now an international intervention … History will not be merciful with anyone who will not look into this violation; it will record those who did not do anything,” Khoury said.

“It wasn’t just Lebanese people who were killed… Therefore, it is not just a Lebanese issue, it’s an international issue and it’s about time they stand to their responsibilities … considering the HRC mandate is to look into the violation of human rights.”