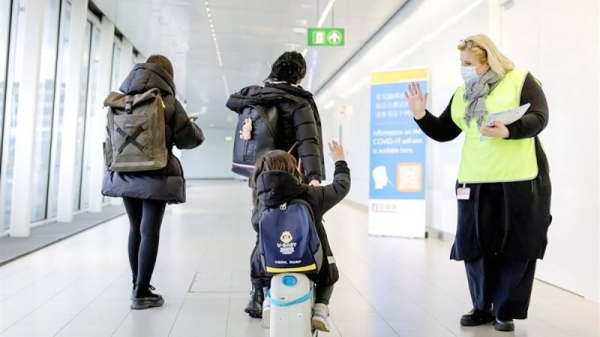 European Union member states agreed on Wednesday to “strongly encourage” a requirement that would obligate all travelers coming from China, regardless of nationality, to present a negative COVID-19 test as the number of infections surges in the Asian country.
The coronavirus test should be taken no more than 48 hours before embarking on the flight.

The decision, which is not legally binding, was made by the EU’s integrated political crisis response (IPCR), a body that helps coordinate crisis management among the 27 member states.

The IPCR also agreed that passengers on flights to and from China to the EU should wear medical masks or respirators, in addition to other hygiene measures that national authorities might mandate.

Member states are urged to conduct “random testing” on passengers arriving from China and to monitor the wastewater from aircraft in search of clues about any potentially dangerous variants, according to a statement released by the Swedish presidency of the EU Council.

The recommendations will enter into force as of Monday.

It comes as some EU countries, such as Italy, France and Spain, imposed their own unilateral travel measures in response to a mass outbreak of COVID-19 cases in China, which began after Beijing abruptly relaxed the so-called “zero-COVID” measures that were supposed to contain the spread of the virus.

The U-turn was considered a reaction to widespread street protests against the draconian policies, which saw entire cities being locked down and people confined to their homes for extended periods of time.

Due to the opacity and stringent information control exercised by the Chinese state, the exact extent of the outbreak is unknown.

According to data provided to the World Health Organization (WHO), China registered 242 deaths from COVID-19 in the week of Dec. 26.

But last month, a UK-based group of health experts said that around 9,000 people could be dying from the disease every day.

In the lead-up to Wednesday’s EU decision, which was widely expected, Beijing described the travel restrictions as “unacceptable” and “discriminatory”.

“We strongly oppose attempts to manipulate COVID measures for political purposes and will take countermeasures based on the principle of reciprocity,” Foreign Ministry spokeswoman Mao Ning said.

There is concern among European countries that the uncontrolled surge in infections could give birth to new and more infectious COVID-19 variants, threatening to undo the progress made in the last two years.

The European Centre for Disease Prevention and Control (ECDC) said on Tuesday the variants found in China ”are already circulating in the EU, and as such are not challenging for the immune response of EU citizens.”

Over 75% of the EU’s total population has received at least one vaccine dose.

“Given higher population immunity in the EU, as well as the prior emergence and subsequent replacement of variants currently circulating in China by other Omicron sub-lineages in the EU, a surge in cases in China is not expected to impact the COVID-19 epidemiological situation in the EU,” the agency said in a statement.
#Coronavirus  #COVID-19  #vaccine  #Covid