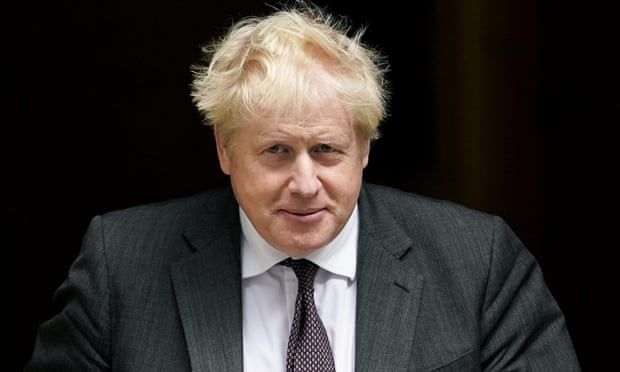 Boris Johnson has laid the groundwork for the next general election with a ruthless cabinet reshuffle, designed to clear out failing ministers and hand Michael Gove the key job of making “levelling up” a reality for sceptical voters.

On a day of dramatic developments in Westminster, Johnson sacked three cabinet ministers including the gaffe-prone education secretary Gavin Williamson, and shifted Dominic Raab from the Foreign Office to the Ministry of Justice. Liz Truss, the media-savvy darling of Conservative grassroots members and champion of free markets, will replace Raab as foreign secretary.

Johnson kicked off the reshuffle by inviting ministers set to be sacked or sidelined to his House of Commons office, as MPs began a debate called by Labour over the £20-a-week cut to universal credit coming into effect next month.

Williamson had been widely expected to be offered an alternative role – perhaps his old post as chief whip – but was instead dispatched straight to the backbenches. 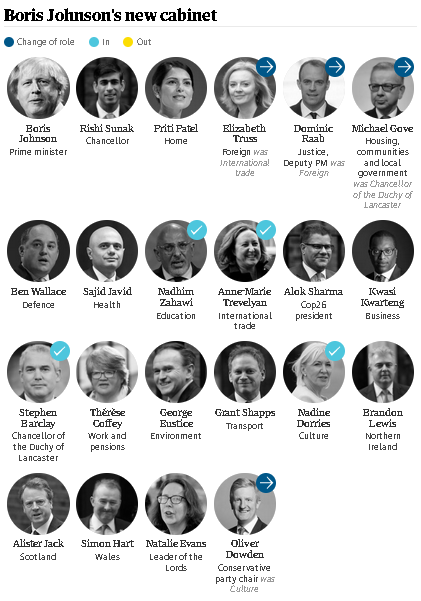 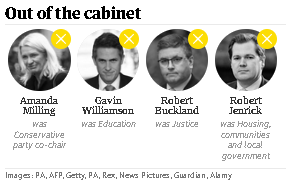 Raab managed to wrest the consolation title of deputy prime minister from Johnson after fraught negotiations but the move to justice secretary was widely seen as punishment for his role in the chaotic evacuation from Afghanistan last month.

No 10 also appeared to signal its determination to continue prosecuting the culture wars, with the surprise appointment of Nadine Dorries as culture secretary. Dorries is a longstanding and vehement critic of the BBC, arguing against the continuation of the licence fee and labelling it institutionally skewed. In 2018 she called it “a biased leftwing organisation which is seriously failing in its political representation, from the top down”.

Downing Street sources insisted the former I’m a Celebrity contestant had not been put in place to pursue an “anti-woke” agenda, describing her as a “rising star” who could communicate well with the public and who had been consistently loyal to the prime minister.

In the Department for Education, Williamson will be replaced by Nadhim Zahawi, an Iraqi-born entrepreneur who arrived in the UK as a child speaking no English. Zahawi is viewed as a safe pair of hands in Downing Street after his management of the Covid vaccination programme.

Gove emerged from the reshuffle as the secretary of state of the Ministry of Housing, Communities and Local Government (MHCLG) with responsibility for enacting Johnson’s levelling-up agenda across government.

In July, the prime minister gave a speech on levelling up that was widely derided as lacking in concrete policies, and Tory MPs in so-called “red wall” seats are anxious about whether they can make good on their promises to former Labour voters. 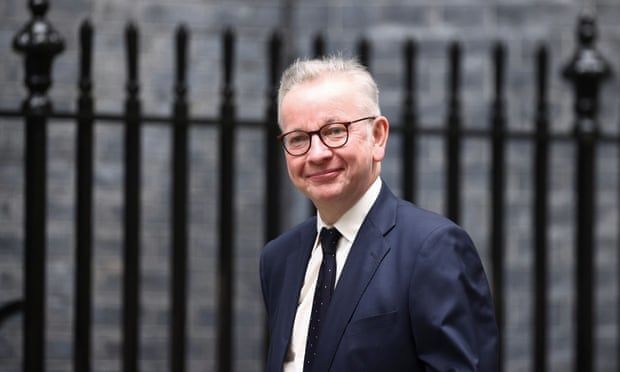 Michael Gove has been given key job of making ‘levelling up’ a reality for sceptical voters.

Gove will also have the job of defusing the row over radical planning reforms, which have sparked a backlash in traditional Tory seats like his own in Surrey Heath. He will also remain in charge of protecting the union and fighting elections.

Johnson’s official spokesperson said the reshuffle was the second part of the plan to relaunch government strategy following the winter plan for Covid announced on Tuesday.

“The PM set out his plan for managing Covid during the autumn and winter,” he said. “But the government must also redouble our efforts to deliver on the people’s priorities. The PM will be appointing ministers [on Wednesday] afternoon with a focus on uniting and levelling up the whole country.”

Gove will take on the role from Robert Jenrick, who was an unexpected victim of Johnson’s removal of unpopular ministers.

Ryan Shorthouse, chief executive of the Conservative thinktank Bright Blue, said Johnson appeared to be “rewarding those who are good at publicity and removing those that have had overwhelmingly negative or no media for their work.

“Raab has been demoted for Afghanistan. Williamson departs because of exams and assessment. Jenrick for planning reforms. Buckland for relative silence,” he said. 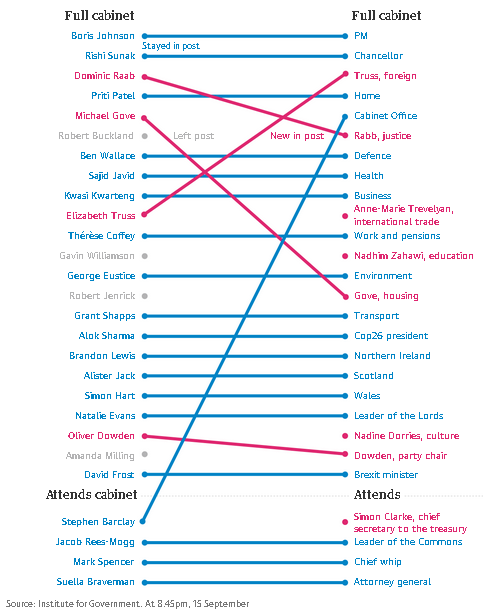 Robert Buckland, the former justice secretary who was moved aside to make room for Raab, stressed in his resignation letter that the justice system was suffering from “years of underfunding”. “Justice is beyond price, and as a government we should always be prepared to invest in it,” he said.

Oliver Dowden, who is trusted by Downing Street, has been given the job of overhauling the Tories’ election-fighting machine as party co-chair after recent byelection defeats in Chesham and Amersham and Batley and Spen.

Several high-profile ministers who had been tipped for a move, including the home secretary, Priti Patel, the leader of the House of Commons, Jacob Rees-Mogg, and the Welsh secretary, Simon Hart, will remain in their posts.

Patel’s allies had signalled in advance that she would resist any attempt to move her into a less prominent role. Johnson frequently touts her tough-on-crime stance – joking at a recent lunch for business donors that she was turning the UK into “the Saudi Arabia of penal policy”.

The wide-ranging reshuffle barely improved the gender balance in Johnson’s cabinet, with the number of women increasing from six to seven. However, with more junior posts to be filled on Thursday, Downing Street sources insisted the full picture would look more balanced.

The junior education minister Michelle Donelan was being tipped for promotion to a new role covering skills, which could see her given the opportunity to attend cabinet, modestly boosting diversity. Late on Wednesday night, it was announced that Greg Hands had been moved from the Department of International Trade to a new brief as business minister, while Kemi Badenoch has been given a junior minister role at MHCLG jointly with the Foreign Office.

Raab tweeted that he was “delighted” to have been offered the post of justice secretary but allies said he was deeply frustrated to have missed the opportunity to announce a new security alliance between the UK, US and Australia he has been involved in developing for months. Truss is now expected to join the prime minister in travelling to the US for talks next week.

Sir Bob Neill, a Tory MP who chairs the Commons justice select committee, criticised Buckland’s firing, saying he “deserved better” and was “shabbily treated”. “I can see no good reason for it at all,” he said, adding that Buckland was “doing a good job as justice secretary and, crucially, understood the constitutional importance of the lord chancellor as a guardian of the justice system – and he was entirely loyal to the prime minister”.

The reshuffle came as Johnson and his team hope they have emerged from the worst of the Covid pandemic and can focus on domestic reform – though the autumn and winter plan they published on Tuesday included “plan B” contingency measures to come into force in the event that the NHS appears at risk of being overwhelmed, amid warnings that the country is at a “pivot point”.

With the next general election due in 2024 or potentially sooner, Johnson must find a way of reassembling the coalition of traditional Tory voters and former Labour switchers that coalesced behind his “get Brexit done” message in 2019.