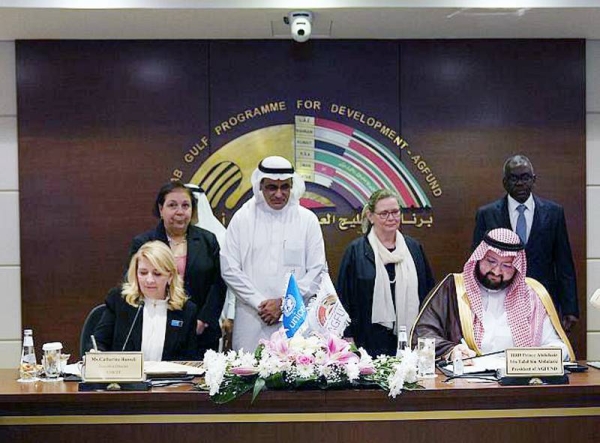 AGFUND, UNICEF mark 40 years of partnership and commitment toward children

The Arab Gulf Program for Development (AGFUND) held a memorial ceremony here Monday, in cooperation with UNICEF, marking 40 years of partnership between the two organizations and the results achieved in the field of children.
The ceremony was held in the presence of Prince Abdulaziz Bin Talal, president of AGFUND, and Catherine Russell, UNICEF executive director.

Russell said: "UNICEF is honored to rely on a partner like AGFUND, and we look forward to more support and better protection for the most vulnerable children for another 40 years and more."

She added that several generations of children in Asia, Africa, Latin America, and others benefited from this partnership which started in 1981, led by the late Prince Talal Bin Abdulaziz, the special envoy of UNICEF and the founding President of AGFUND.

Over the past four decades, UNICEF has cooperated with AGFUND in nearly 100 projects in the field of relief for victims of natural disasters and conflicts and providing system-wide support in national health, education, protection services, and other basic services.

Prince Abdulaziz lauded the partnership between the two sides and said: "We are proud of the results of this 40-year partnership, which not only reflects AGFUND’s efforts to enable children to obtain their rights but also reflects the great solidarity shown by the Gulf society towards vulnerable groups, regardless of where they are."

He added that cooperation with UNICEF has enabled them to support many children and families around the world, which made it an exemplary global partnership with tangible results worldwide.

In a related context, the two parties signed a memorandum of understanding defining the areas of institutional cooperation in the short term, which include early childhood development, child protection, health, education, and advocacy.

This is in addition to signing a financial grant agreement provided by AGFUND to support UNICEF’s efforts to confront the coronavirus pandemic in Sudan, aimed at increasing the vaccination rate and raising awareness of its importance.

The two parties also launched an exhibition of pictures, infographics, and maps that reflect the depth of the partnership between the two organizations.

The signing was attended by the UNICEF Regional Director for the Middle East and North Africa Adele Khodr, the UNICEF Representative in the Arabian Gulf Eltayeb Adam, and the Executive Director of AGFUND Nasser Al-Qahtani.
#Coronavirus