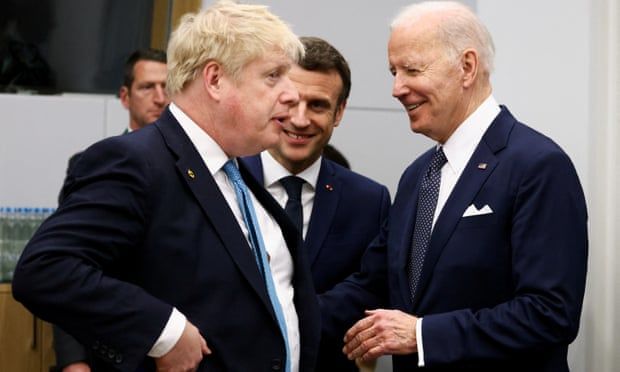 Will western leaders cut and run as the costs of the Ukraine war mount?

The longer the war goes on, the more the early anti-Putin momentum could be stalled by political stresses, an energy crisis and the huge bill for military and humanitarian aid
How long will the western democracies maintain present levels of support for Ukraine? The war’s economic impact, already manifesting itself through spiralling inflation and living costs, could have seriously negative political consequences for elected leaders in the US, Germany, France and the UK. If public willingness to make difficult sacrifices diminishes in the months ahead and the conflict slips off the front pages, will they stay the course?

Germany’s chancellor, Olaf Scholz, is currently fixated on the security of domestic energy supplies, not the future security of Europe. He knows Putin’s threat to cut off the gas, if implemented, would spark a national emergency. Scholz’s ruling coalition is creaking after a row with the Greens, who say he and his former boss, Angela Merkel, were “blind” to the risks of energy dependence on Russia.

This argument will only intensify, the longer the war continues – and not only in Germany. “Europe should stop spending up to €800m per day on purchasing Russian gas,” a new paper from the Centre for European Reform argues. “In 2021 … Russia exported more than 49% of its oil and 74% of its gas to Europe.” Halting all such purchases voluntarily, it said, might be the most effective sanction Europe could impose. “The political will to take such a radical step is still absent.” And, sadly, likely to remain so.

Joe Biden’s Nato and EU summitry last weekend did not produce a much-needed long-term plan for defeating Russia or better weapons for Ukraine’s defenders. But it did raise questions about his leadership. Biden’s crisis management has brought a modest poll boost. A new survey showed 61% of Americans believe higher petrol prices, up 20% in a month, are worth it to beat Russia. Most support additional US troop deployments.

But this spirit of solidarity is finite. Biden looks tired and vulnerable, with a low overall approval rating of 41%. Only 39% approve his handling of the economy. This is the battlefield that matters most in the US as a neo-Trumpist Republican party eyes a takeover of Congress in November. This is why the White House has tapped its strategic oil reserves. Will stumbling Biden stay the course, or seek a quick way out?

In the US and EU, early anti-Putin momentum seems to have stalled and may even be reversing. Ukraine’s foreign minister, Dmytro Kuleba, urged Brussels last week to swiftly introduce a fifth sanctions package. But foreign policy chief Josep Borrell said the EU would “maintain” rather than “elevate” pressure on Moscow – the overly cautious approach favoured by Paris and Berlin which infuriates Poland and the Baltic republics.

Ukraine-related pressures on western leaders are undoubtedly escalating across the board. The IMF warned last month that the war would cause “devastating” damage to the global economy as well as deep recessions in Russia and Ukraine. One forecast published last month predicted a £90bn hit to the UK alone as consumers and businesses struggle to recover from the pandemic.

It may be that western politicians will keep their word and honour their commitments to Ukraine. Or maybe not. Zelenskiy, for one, has his doubts. Speaking to the Economist, he expressed reservations about the trustworthiness and reliability of some leaders, including Boris Johnson.
Advertisement

“Britain wants Ukraine to win and Russia to lose … It is not performing a balancing act,” Zelenskiy said. But he added that he was unsure whether Johnson secretly hoped the war would drag on, thereby weakening Putin (and strengthening Johnson). Zelenskiy said Germany’s “pragmatic” Scholz was mistakenly “on the fence” and urged Orbán to pick a side. His harshest words were reserved for Macron’s government. “They are afraid,” he said bluntly.

If the war grinds on into the autumn, as many predict, economic pain, especially over energy costs, resulting political stresses, “sanctions fatigue”, increased public apathy, and the daunting financial cost of open-ended military assistance, humanitarian aid, and millions of refugees could combine to critically undermine governments’ support for Ukraine’s fight.

A western failure on this scale would be a disaster for Ukraine’s people, Europe’s security and common decency. But it’s possible to see how it might happen. Putin, of course, is watching, waiting for fatal cracks to appear. Yet he, too, faces deeply threatening internal tensions and challenges, as western intelligence chiefs noted last week. They suggest he’s at odds with his generals, is out of touch, and could be losing control.

Maybe this is how the war ends. Not with a bang or a shabby deal but with a slow collapse. Who will last longer: Putin the deluded, paranoid war criminal, or the motley crew of unreliable western politicians who oppose him?
#Angela Merkel  #Boris Johnson  #Joe Biden  #Johnson