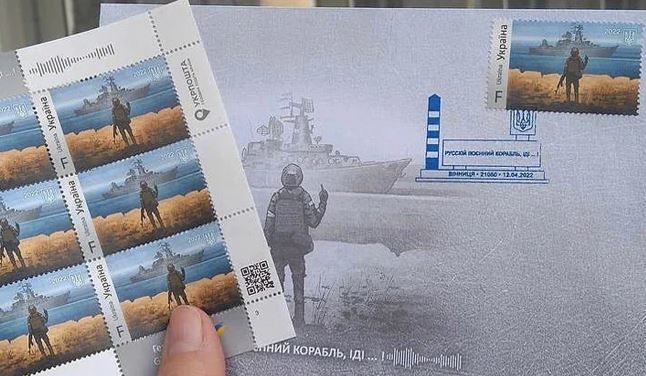 Ukraine-Russia War: The stamps honour one of the greatest moments in Ukraine war, when the soldiers guarding the Snake Island told a Russian ship to "Go f*** yourself".

When Russia's invasion of Ukraine began in February, an iconic moment emerged from the early days when Russian warship Moskva asked Ukrainian border guards on Snake island to surrender. But the soldiers told the ship to go f*** yourself.

Two months later, the border guards are alive and have received awards from the Ukrainian government, the Russian warship is at the bottom of the sea. But the exchange went viral on social media, and was later etched on stamps that are selling like hotcakes in Ukraine.

Many Ukrainians have been spotted standing in queues for hours outside post offices to get their hands on the iconic moment from Ukraine war.

One such buyer - 63-year-old Viktor Fyodorovich - spoke to The Guardian after two sheets of stamps, 16 in total. “I've never felt so much pride before in our nation. It's a symbol of our courage and steadfastness,” he said.

Available from Kyiv's central post office, the stamps show a Ukrainian soldier giving the finger to Moskva. The now viral phrase has been used on the sides of the stamps.

Ukrposhta, Ukraine's designated postal operator, has been posting regular updates about the huge sale of these stamps. “It has been five days since the launch of the postage stamp with the ship, and almost half a million copies have already been sold. Circulation was one million, and we do not plan to reprint it. Therefore, each brand will retain its historical value,” it said in one of the posts.

The stamps do not carry the expletive, but Ukrainians say they deliver a strong message.

The final design of the stamp was chosen from the entries Ukrposhta received in a competition. It said that the stamps are being sold in stores, and a limited number can also be purchased online.