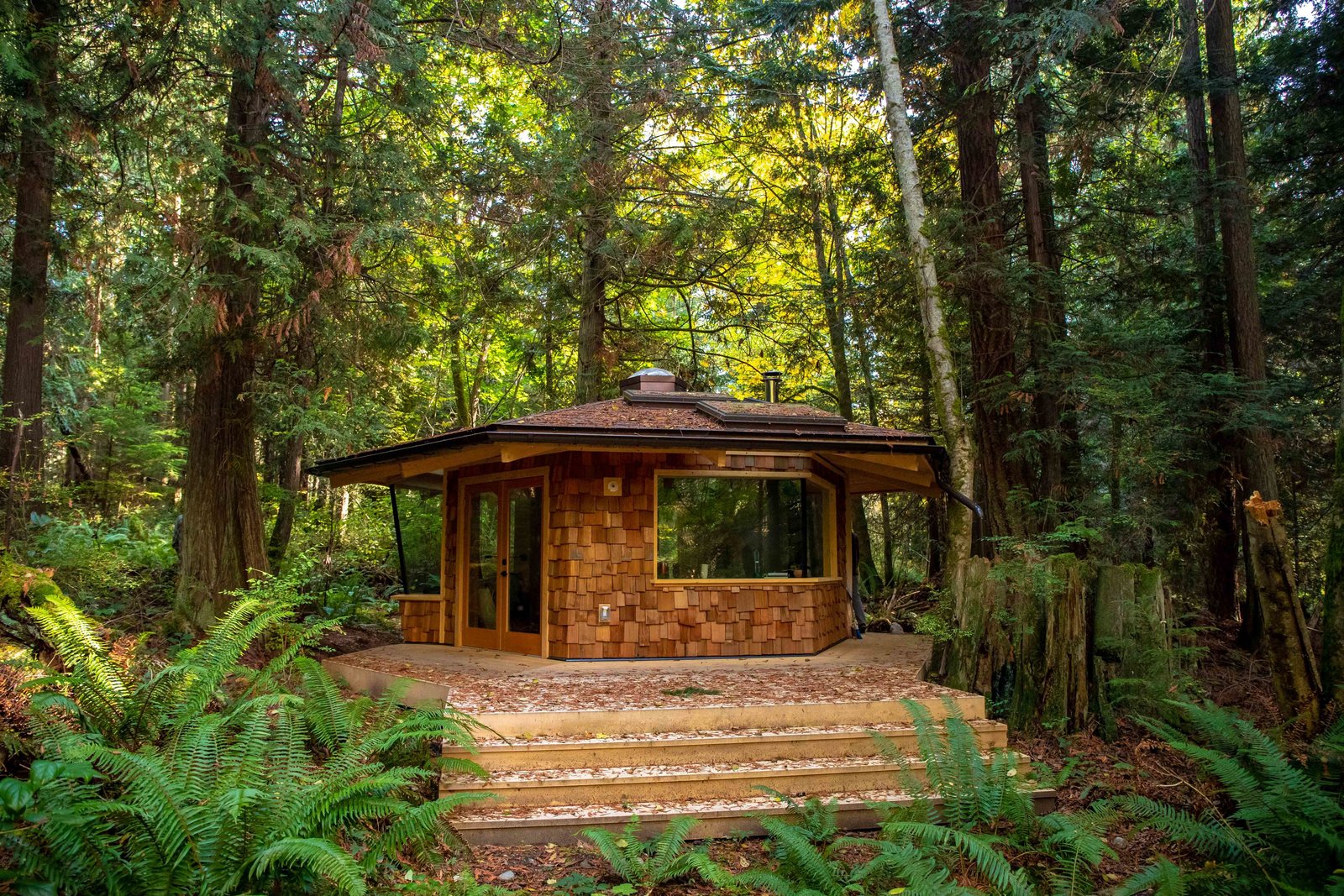 Two Brothers Build a Woody, Hexagonal Studio in the Forest

The studio, a dream getaway for a busy mother and doula, is set in the woods of British Columbia.

The 250-square-foot hexagonal studio that brothers Marlin and Ryan Hanson, of Hanson Land & Sea, designed and built for their client, a birth doula and mother who lives on the Sunshine Coast of British Columbia, is a much-needed and not-too-far escape. In fact, it rests in her own backyard among a woodland of cedar, hemlock, fir, and maple trees. "I live on forested acreage in the small community of Roberts Creek," she says. "The studio is where I slow down, write, meditate, and reconnect with nature. It’s also where I teach private prenatal classes and yoga."

Ferns, salmonberry, elderberry, starflowers, and moss also surround the studio, which the Hanson brothers sited in a natural clearing. "There was a nice opening in the trees a good distance from the main house," Ryan says. "There’s privacy but it’s not too far of a walk." 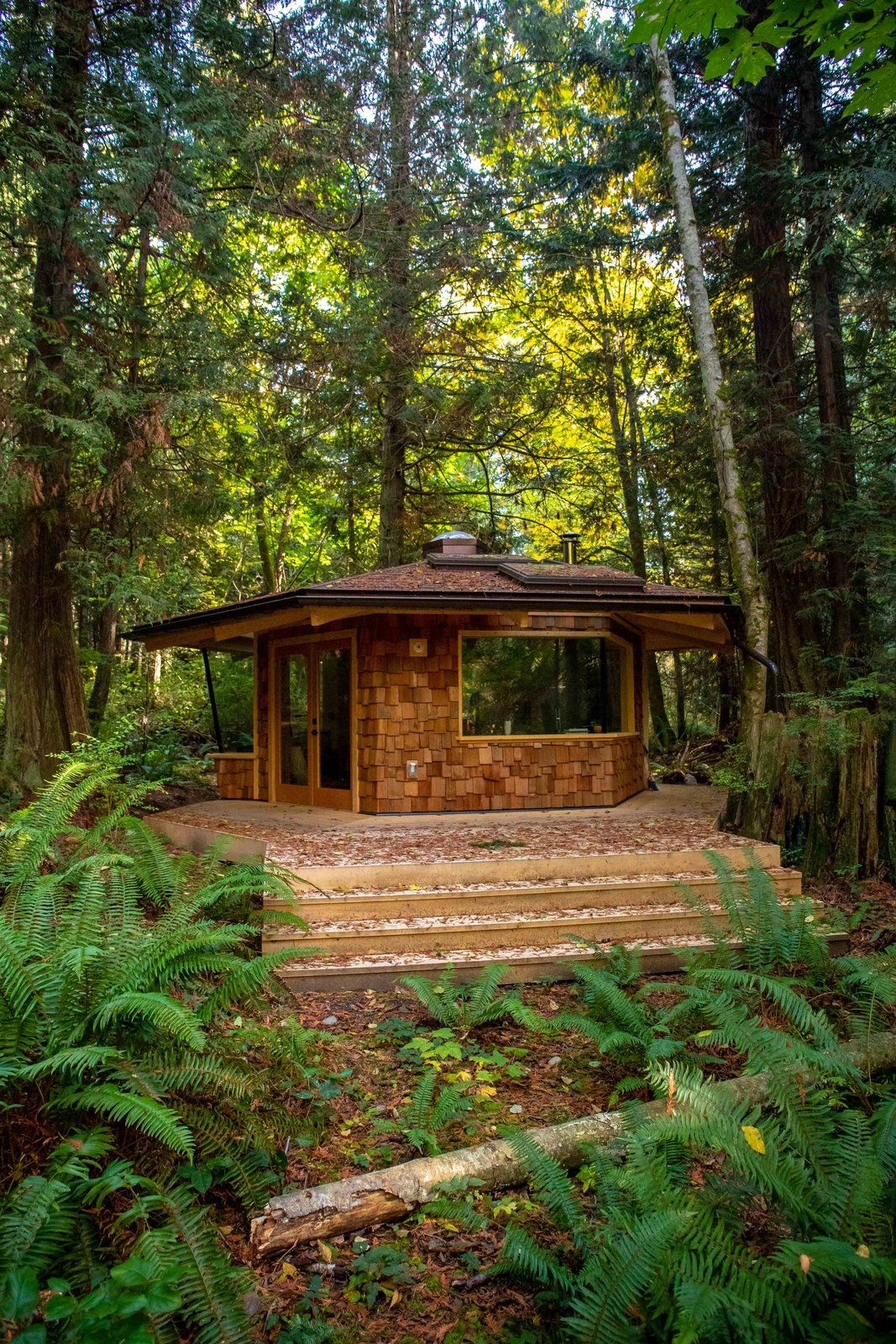 The hexagonal backyard studio that Marlin and Ryan Hanson, of Hanson Land & Sea, designed and built in British Columbia, Canada, is clad with western red cedar shakes and a metal roof.

The hexagonal form of the studio was developed in response to the client’s request for something circular, a structure with orientation in all four cardinal directions. "A hexagon is strong and simple to lay out," Ryan says. "We’ve always been pulled to hexagons-we grew up in a hexagonal house our dad built so I guess they’re in our blood."

The Hansons clad the studio in hand-split western red cedar shakes applied in a staggered pattern. "This is a great material to work with," Ryan says. "The cedar shakes have a natural ability to split straight, making them fun to work with. The staggered pattern gives a bit of funk, a whimsical feel." The deck that surrounds the studio was crafted with yellow cedar. "Like red cedar, it’s naturally rot-resistant, but it’s lighter in color and has an amazing smell," Ryan says. And though it’s often covered with fallen leaves, the roof is made from metal and features horizontal seams and large skylights on the south-facing plane that flood the interior with sunlight. 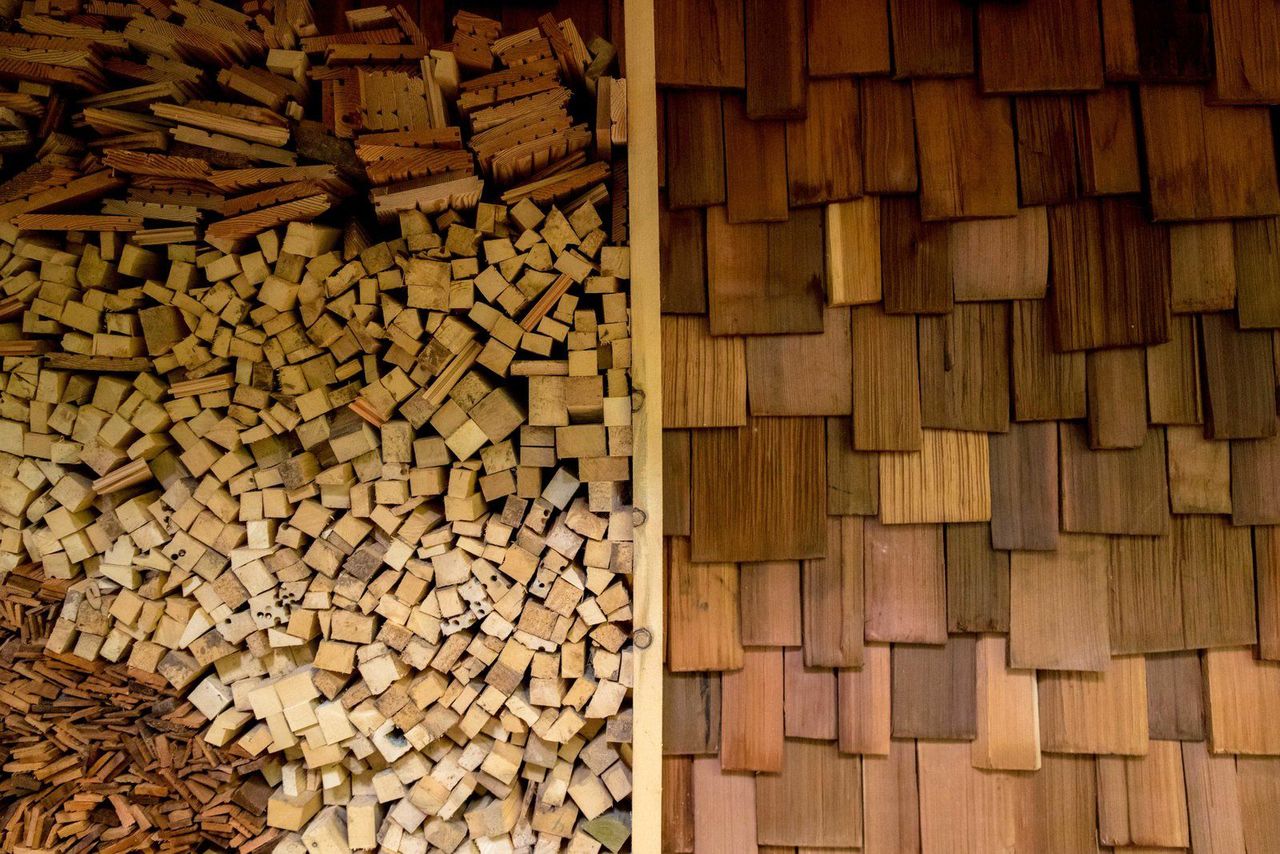 The Hansons applied cedar shakes in a staggered pattern, creating a playful aesthetic; stacked fire wood creates interest on the exterior of the tiny house. 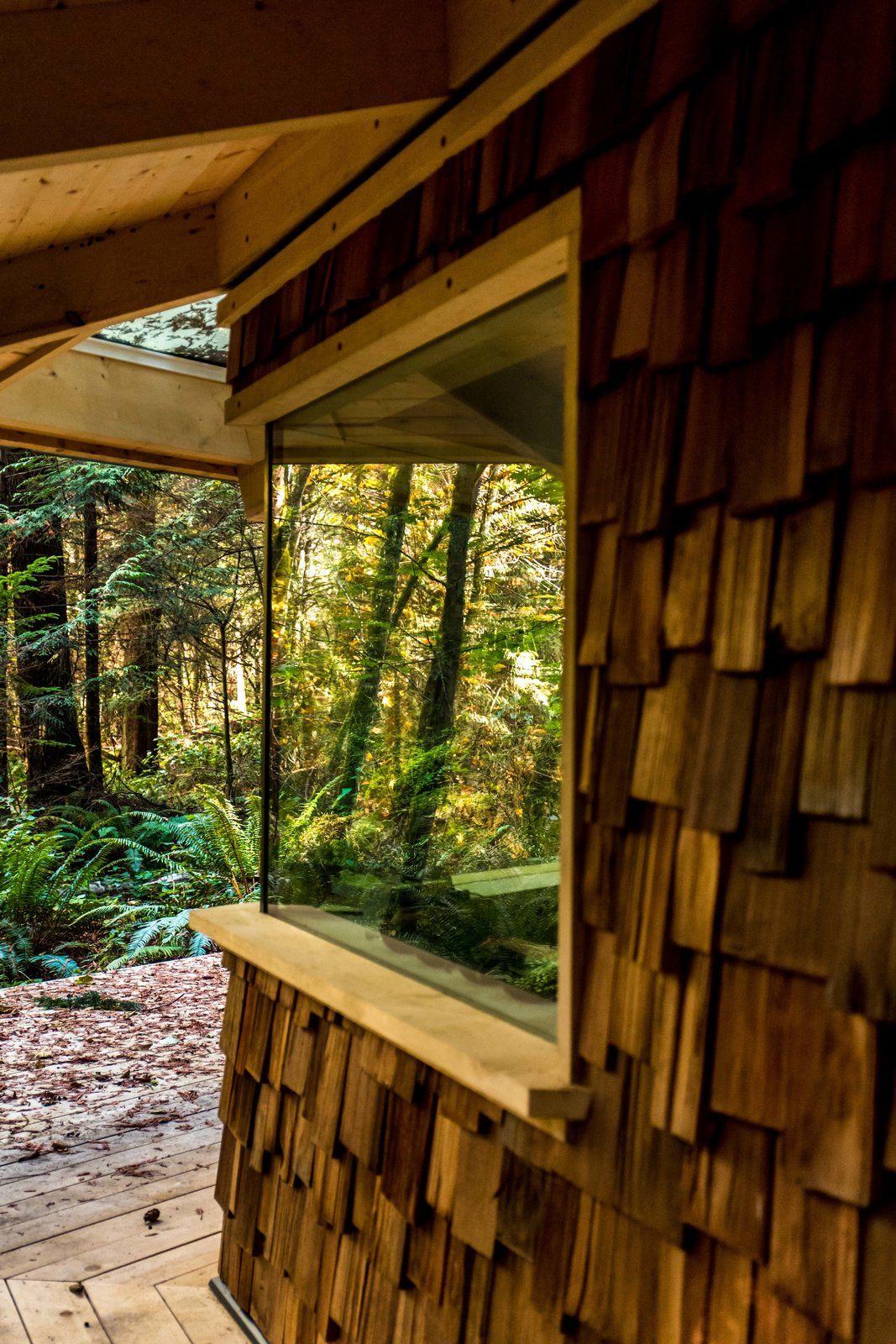 Large windows offset the cedar exterior and provide expansive views of the forested surround, linking the studio with the natural landscape.

On the interior of the studio, Douglas Fir flooring and clay plaster walls provide warmth and texture that tie the structure to its natural surrounding. "We love working with natural plasters," Ryan says. "The texture and application are so satisfying. There’s a natural feel as soon as you enter. Your body can tell right away there’s something different about the walls. It isn’t your average drywall and paint feel." Yellow cedar ceiling beams pinwheel off of a steel-framed oculus at the center of the ceiling, allowing for more texture and sunlight on the interior.

"Because the form is a hexagon, laying the flooring straight across didn’t make sense," Ryan says. "The roof boards are straight between the hip rafters and crest the hexagonal pattern. We mirrored that on the floor." The Hansons tied the sides of the hexagon together at the center with stone. "The client had a piece of black soapstone left over from the counters in the main house," Ryan says. "We cut this to fit the middle and inlaid a ring of Purple Hart that we had in the shop. 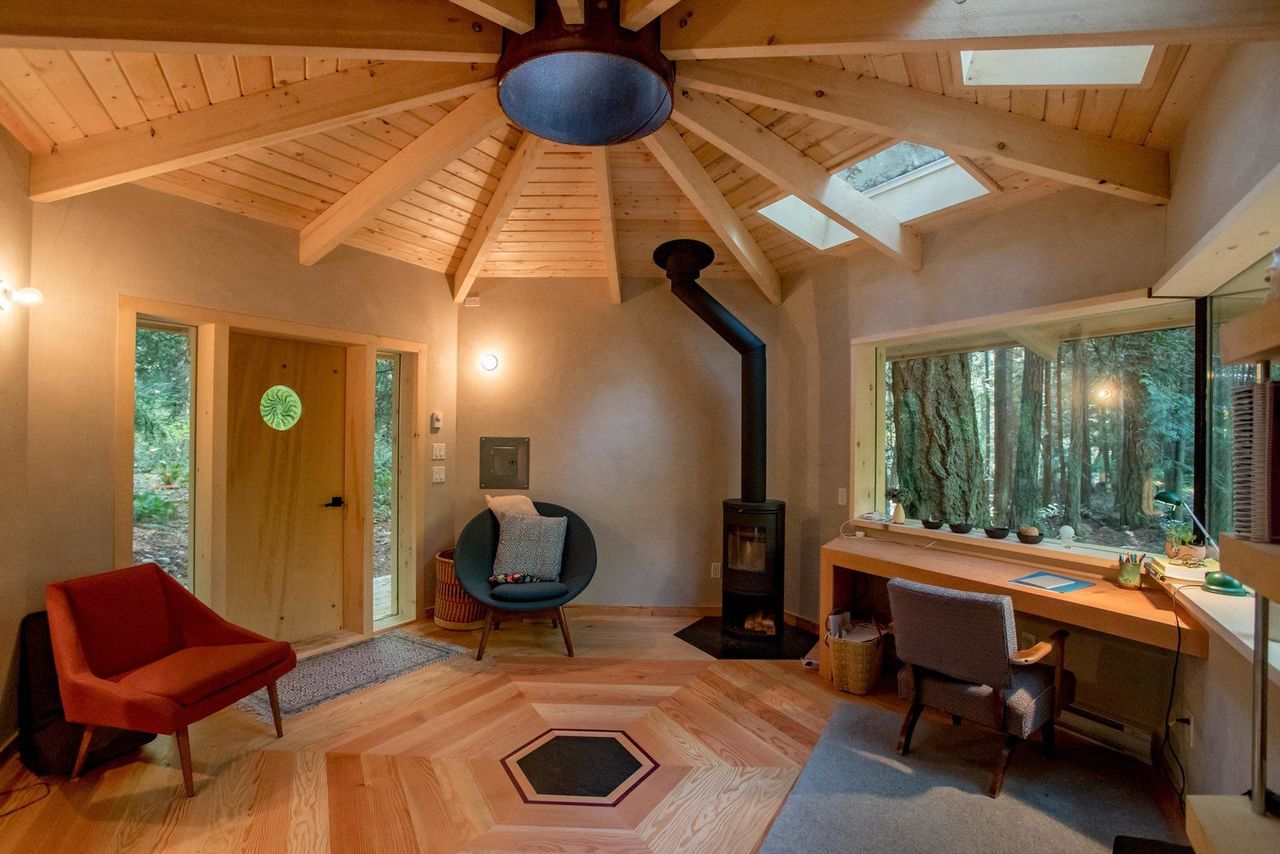 Douglas Fir floor boards are laid in a hexagonal pattern on the interior of the studio, where clay plaster walls lend warmth and texture. Skylights flood the space with plenty of sunlight. 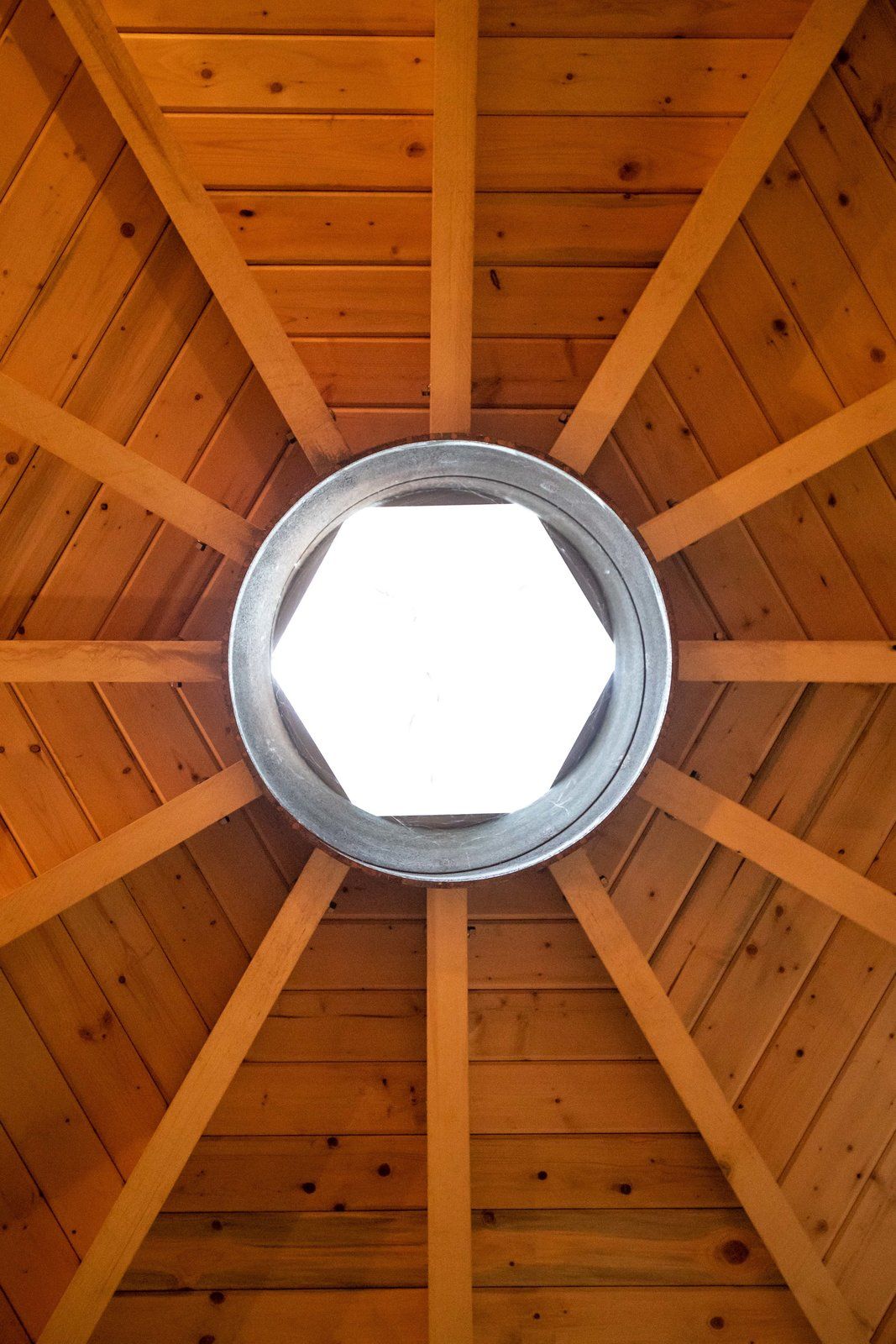 The centrally located hexagonal skylight is framed with steel and echoes the building's form.

The front door of the tiny studio is a single slab of yellow cedar with custom fabricated stainless-steel hinges. "We do a lot of large slab milling and love using slabs for entry doors," Ryan says. "It’s another thing we inherited from our dad, who did this on a bunch of houses he built and that we grew up in." The cedar door is punctuated by a circular window that showcases colored glass. "It was hand-blown by our friend at Molten Spirit Glass," Ryan says. "We wanted a window that was like a ship porthole. A hand-blown window seemed like a great way to introduce a little color and built-in art." 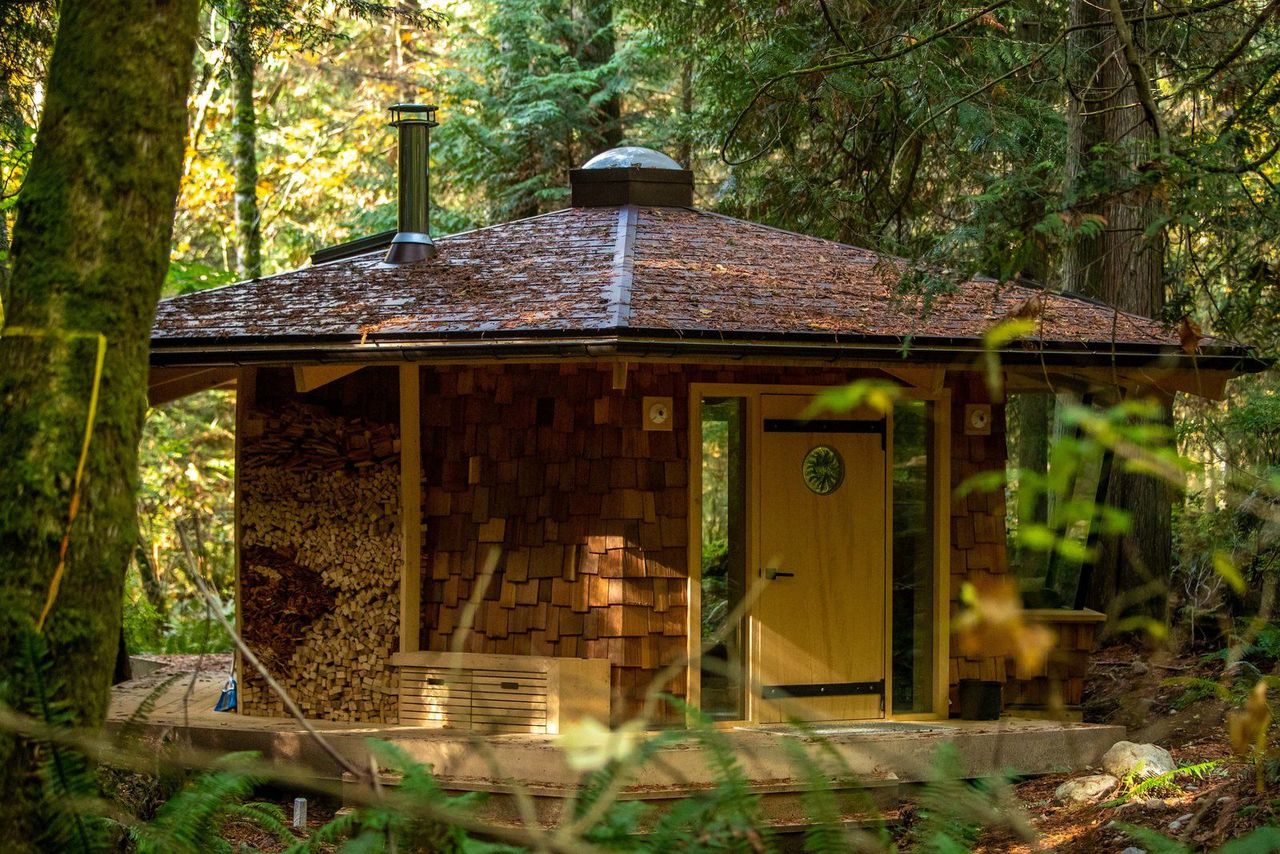 The Hansons crafted the front door from a single slab of yellow cedar. The circular window in the door mimics a ship porthole and features hand-blown colored glass. 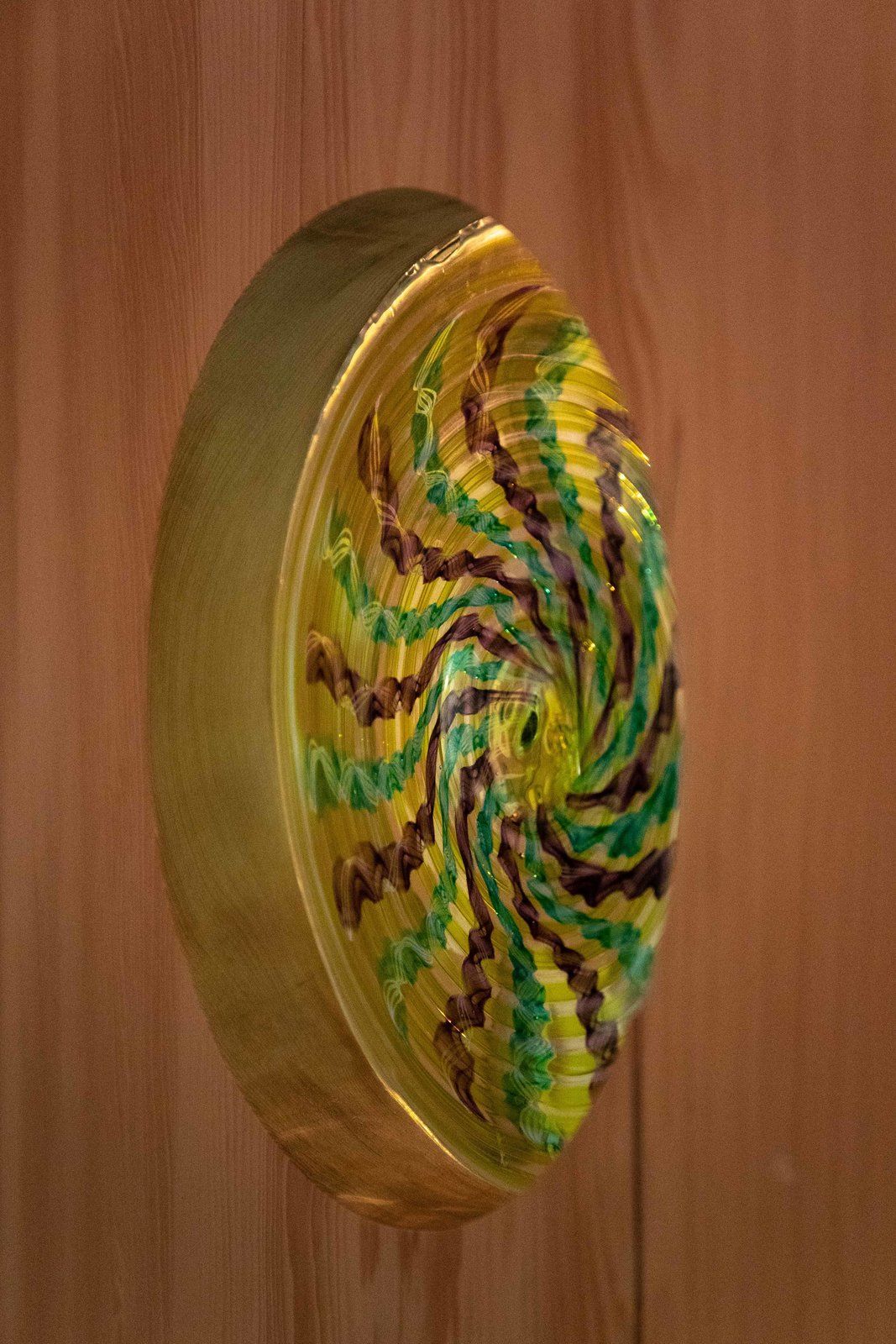 A window with hand-blown colored glass in the front door lends vibrancy and an artful note for the exterior of the studio.

The studio is one room and features a wood-burning fireplace, a bookcase, a built-in desk and a wall with a bump out, where there’s a built-in bed. "The desk looks out toward the brightest grove," the client says. "Every door and window has a view of the forest. Each way you look, you get a different [perspective] of growth and change—bright deciduous to the West, letting in more light, and deep undergrowth and dense evergreens to the North, which gives a more intimate feeling of being held by the trees." 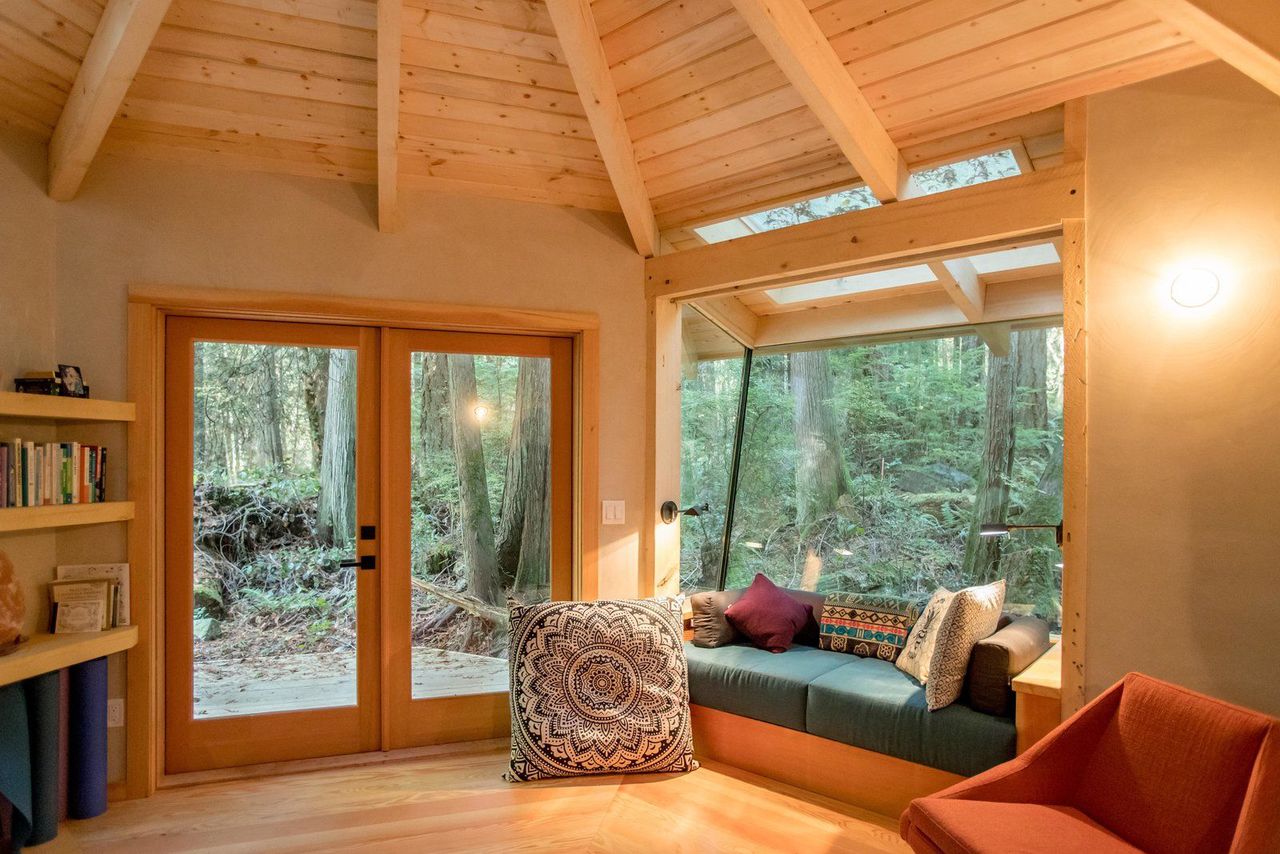 A built-in sofa situated in a glass bump-out in the wall converts to a bed.