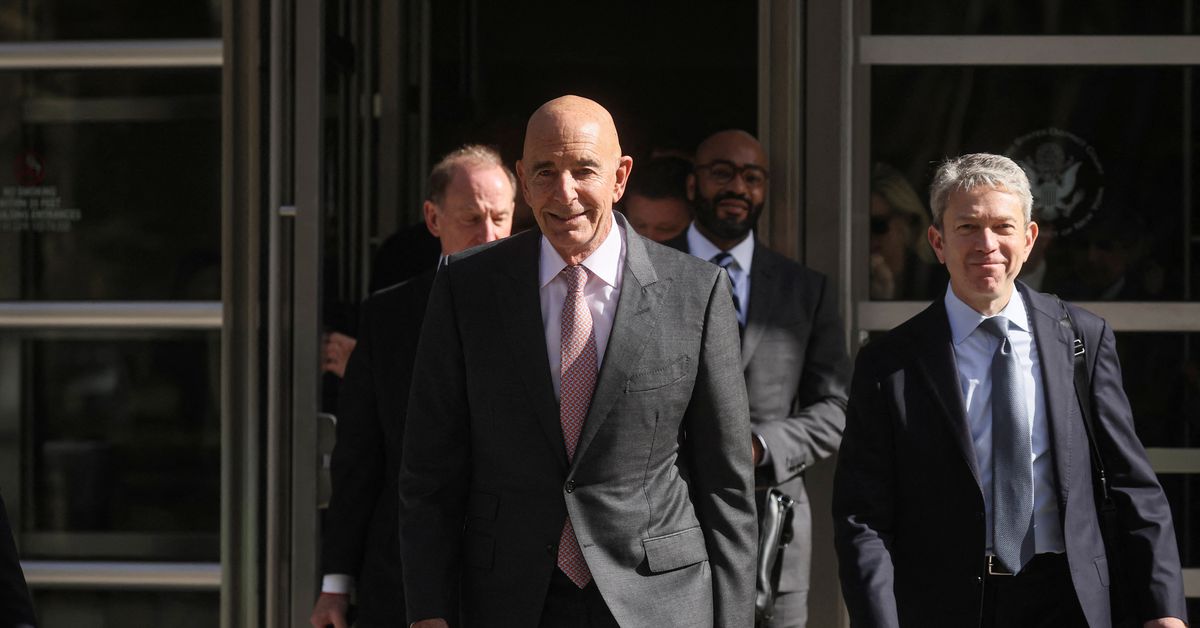 Tom Barrack, a onetime private equity executive and fundraiser for former President Donald Trump, was found not guilty by a jury on Friday of unlawfully acting as an agent of the United Arab Emirates.

Tom Barrack, a onetime private equity executive and fundraiser for former President Donald Trump, was found not guilty by a jury on Friday of unlawfully acting as an agent of the United Arab Emirates.

Barrack, who chaired the former president's 2017 inaugural committee and served as an informal adviser to the campaign, was acquitted of all nine counts he faced, including conspiracy to act as a foreign agent, obstruction of justice, and making false statements to the FBI in 2019 during their probe of his interactions with Emirati officials and their representatives.

"I'm humbled," Barrack told reporters outside the federal courthouse in Brooklyn after the verdict, which followed a six-week trial. "I have no hostility, I'm just proud to be an American."

Barrack, 75, hugged his lawyers in the courtroom after the verdict was read. His lawyer Randall Jackson said during closing arguments on Tuesday that there was "nothing nefarious" about his ties to Middle Eastern politicians, whose portfolios included investments.

In a statement, Trump called the verdict a "Great Victory for our Nation."

"Great news for our Country, Freedom, and Democracy in that businessman Tom Barrack, who should have never been charged or tried, was just acquitted," Trump wrote. "My great respect goes out to the jurors for their courage and understanding in coming to an absolutely correct decision."

Prosecutors last year charged Barrack with using his influence with Trump's 2016 campaign and administration to push UAE policy interests, without notifying the U.S. attorney general as required by law that he was acting as an agent for the Middle Eastern country.

Leaving the courtroom, Grimes, 29, said he was "grateful to live in the United States" and to be tried by a fair and impartial judge and jury.

During the trial, prosecutors showed jurors hundreds of text messages and emails between Barrack and Grimes, and a businessman named Rashid Al-Malik, whom prosecutors say acted as an intermediary between the two and UAE officials. Al-Malik is at large.

Prosecutors said the messages showed that Barrack received input from Emirati officials and intermediaries on what to say about the Middle East in TV interviews, and passed along sensitive details about U.S. foreign policy and personnel appointments.

In arguing to the jury on Tuesday about why that mattered, prosecutor Sam Nitze said Emirati officials were pleased with Barrack's televised comments about the UAE and its leaders, and said U.S. law was designed to make sure the government knows when someone acts as a foreign government's "mouthpiece."

Barrack testified in his own defense. He did not dispute meeting and speaking with Emirati officials, including national security adviser Sheikh Tahnoun bin Zayed al-Nahyan, but denied ever agreeing to act under the country's direction or control, as U.S. law defines agents.

Instead, he described his meetings with the officials as part of his role running Colony Capital, now known as DigitalBridge Group Inc (DBRG.N), and said he also sought to improve mutual understanding between the United States and the Middle East.

Emirati sovereign wealth funds invested $374 million with Colony in 2017 and 2018, which prosecutors described as Barrack's payout for acting as an agent. Barrack's lawyers said that amounted to less than 1% of the firm's balance sheet.

The decision is a defeat for the U.S. Department of Justice, which has ramped up enforcement of laws designed to curb foreign influence campaigns in recent years.

There was no immediate comment from the U.S. Attorney's office in Brooklyn, which prosecuted the case.

Several Trump associates and allies have been convicted in recent criminal trials. Trump pardoned some of them before leaving office.

During his testimony, Barrack told jurors he never asked Trump for a pardon.