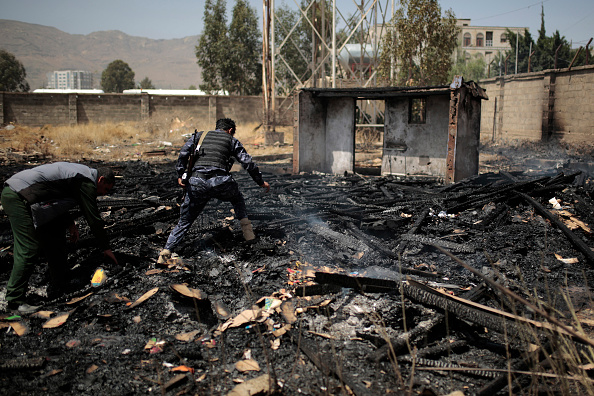 Saudi-led coalition targets Houthis after Friday’s attack by the group on oil depot in Jeddah.

At least seven people have been killed in air raids conducted by the Saudi-led coalition on Sanaa and Hodeida in Yemen.

Brigadier General Turki al-Malki, a spokesman for the Saudi-led coalition, was quoted as saying on Saturday by the state-run Saudi Press Agency (SPA) that the raids targeted “sources of threat” to Saudi Arabia.

The overnight raids on the Houthi-held cities of the capital Sanaa and Hodeidah come a day after the Iran-backed group attacked an oil depot in the Saudi city of Jeddah, their highest-profile assault yet on the kingdom.

The Houthis said Saturday’s attack by the coalition hit a power plant, a fuel supply station and the state-run social insurance office in the capital.

A Houthi media office claimed one air strike hit houses for guards of the social insurance office, killing at least seven people and wounding three others, including women and children.

Images shared by the media office in the aftermath showed wreckage in the courtyard of the office and windows shattered in a nearby multi-story building.

In Hodeidah, it said the coalition hit oil facilities in violation of a 2018 ceasefire deal that ended months of fighting in the city, which handles about 70 percent of Yemen’s commercial and humanitarian imports. The air raids also hit the nearby Port Salif, also on the Red Sea.

Al-Malki, the coalition spokesperson, said the forces targeted drones allegedly being prepared in Hodeidah to be launched on the kingdom and accused the Houthis of using civilian infrastructure, including Hodeidah’s ports and the Sanaa airport, to launch attacks on Saudi oil facilities.

He added the coalition intercepted and destroyed two explosive-laden drones early on Saturday that had been launched from Houthi-held civilian oil facilities in Hodeidah.

On Saturday, the coalition also gave the Houthis a three-hour deadline to withdraw weapons from Sanaa airport and from two ports on the Red Sea, Saudi-owned Al-Arabiya TV reported, without specifying what time the deadline would expire.

A UN mission monitoring the implementation of the ceasefire in Hodeidah voiced concern over the coalition’s attacks and urged warring sides to “maintain the civilian nature of the ports and avoid damage to civilian infrastructure”.

The escalation comes as the Gulf Cooperation Council plans on hosting the warring sides for talks later this month.

The Houthis have rejected the Saudi capital Riyadh, where the head office of the GCC is, as a venue for talks, saying they would not conduct negotiations in “enemy countries”.

On Friday, the Houthis acknowledged carrying out a series of attacks targeting an oil depot in Jeddah and other facilities in Riyadh, ahead of a Formula One race in the kingdom that takes place on Sunday.

Formula One said it received “detailed assurances that the event is secure” and that the race will go ahead as scheduled.