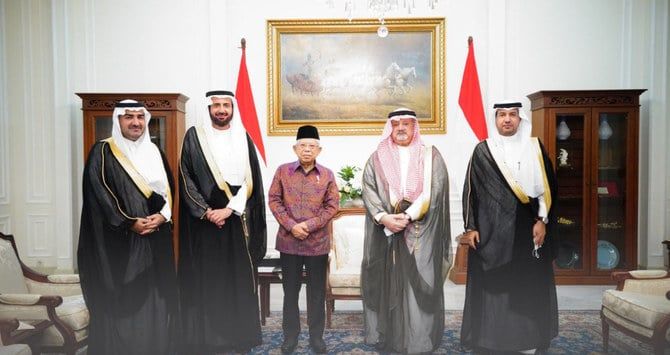 Saudi Minister of Hajj and Umrah Tawfiq Al-Rabiah on Wednesday met Indonesian Vice President Ma’ruf Amin in Jakarta.
The meeting was part of the minister’s official visit to Indonesia, with the aim of discussing cooperation and boosting ties between the two countries to ease the arrival of Indonesian Umrah performers in Makkah and Madinah.

The Kingdom aims to streamline the pilgrim experience as part of Saudi Vision 2030.

Al-Rabiah passed on the greetings of the Saudi leadership to the Indonesian president, the government, and people of Indonesia, and its wishes for continued development and prosperity.

He pointed out that Saudi Arabia was honored to serve the Two Holy Mosques and noted Indonesia’s great Islamic and international influence, including as a member of the G20.

Al-Rabiah said that during the last Hajj season, and in the aftermath of the coronavirus pandemic, visitor numbers increased, registering around 211,000 Indonesian pilgrims who were able to perform their rituals, while the number of Umrah performers coming from Indonesia over the past few months exceeded more than 1 million.

The minister’s visit included meetings with several officials and specialists from the public and private sectors, including the Indonesian Minister of Tourism and Creative Economy Sandiaga Uno to discuss increasing the number of flights between the two countries.

Such a move would boost opportunities for the movement of Saudi and Indonesian pilgrims and Saudi visitors following the Kingdom’s lifting of health and procedural restrictions and decision to allow holders of all types of tourist and personal visas to perform Umrah.

Al-Rabiah highlighted Saudi efforts to rehabilitate the religious historical sites in Makkah and Madinah, under the umbrella of the Pilgrim Experience Program, to enrich the journey of visitors and pilgrims and promote the historical civilizational diversity of the cities and regions of the Kingdom, especially after extending the duration of the Umrah visa from 30 to 90 days.
#Coronavirus