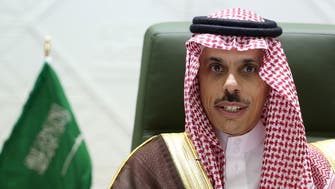 Saudi Arabia supports international efforts aimed at resolving the crisis in Ukraine politically, the Kingdom’s Minister of Foreign Affairs Prince Faisal bin Farhan said during a phone call with his Russian counterpart Sergey Lavrov.
On Wednesday, the Saudi minister received a phone call from Lavrov to discuss bilateral relations between their countries, according to an official statement.

They also discussed ways to strengthen their cooperation and exchanged views on the latest regional and international developments.

“The two ministers also discussed the latest developments related to the crisis in Ukraine, and His Highness stressed the Kingdom’s continued efforts among all parties and its support for international efforts aimed at resolving the crisis politically,” the statement said.

Russia launched a large-scale invasion of Ukraine on February 24. Fighting in Ukraine has since intensified, especially around the eastern city of Bakhmut in Donetsk province and Svatove, further north in Luhansk province.

Donetsk and Luhansk – both of which make up the industrial Donbas – as well as two southern Ukrainian regions are claimed by Russia.

The Crown Prince had been in direct contact with the Kremlin and Ukraine as part of the mediation efforts for the release of the prisoners. Five British citizens, one Moroccan, one Swede, one Croat, and two Americans were released that day.