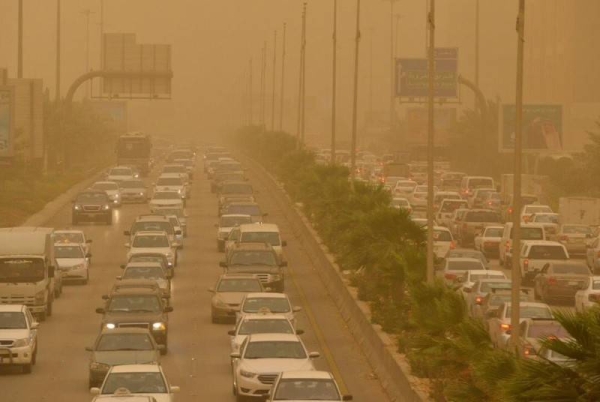 Sandstorm, loaded with tons of dust, reached the outskirts of the governorates of northern Riyadh and started sweeping through the region of Riyadh and the Eastern Province.

The dust storms that originated from Iraq are now hitting Saudi Arabia and three other neighboring Gulf countries such as Kuwait, Bahrain and Qatar, according to reports of the National Center for Meteorology (NCM) and climate experts.

The dust storm that formed in the deserts of Iraq passed through Kuwait before arriving in Hafr Al-Batin and Al-Artawiyah. As the storm reached the Saudi capital in the early hours of Tuesday, it was loaded with dust.

The storm also affected the governorates of the Central Region and the Eastern Province, and it curtailed the range of visibility, and affected those who suffer from respiratory problems.

Abdulaziz Al-Husseini, the prominent weather researcher and member of the Climatic Nomenclature Committee, expected surface winds from moderate to semi-strong during the coming hours of Tuesday, especially in the Eastern Province, and between Riyadh and Eastern Province and south of Riyadh.

In a statement on his Twitter account, he said, after observing through weather observatories, that the dust storm of Iraqi origin is still blowing in parts of the Riyadh region and the Eastern Province.

In an advanced alert to the Riyadh region, the NCM cautioned that the region is witnessing the activity of surface winds accompanied by dust, and almost zero horizontal visibility.

The center warned that many regions of Al-Qassim, Hail, Madinah and the Eastern Province witnessed sandstorm and near zero horizontal visibility on Tuesday.

The center warned the Eastern Province of sandstorm until four on Wednesday morning and the areas that are expected to be hit include Jubail, Al-Khobar, Dammam, Dhahran, Qatif, Qaisumah, Nairiyah, Hafr Al-Batin, Ras Tanura and Qaryatul Olaya.

The Ministry of Health warned asthma patients, children, the elderly and heart patients, of the current dust wave in several regions, noting the need to follow preventive methods to avoid respiratory disorders.

In a video posted on its Twitter account, the ministry underlined the need to follow the instructions of the Civil Defense and the NCM with regard to dust waves and sandstorm as well as to avoid going out during a sandstorm.

It stressed the need to stay in places with good ventilation and cover the nose and mouth when going out. The ministry also urged people to take extreme caution while driving, as well as to improve air distribution system at and rush to the emergency clinics if develop any respiratory disorder symptoms.

For his part, Dr. Abdullah Al-Misnad, founder and head of the Committee for the Nomenclature of Distinguished Climatic Conditions in Saudi Arabia, said that Riyadh and Eastern Province regions are likely to be hit by the dangerous white dust, urging everyone to use highly advanced masks to be rid of them.

Al-Misnad, a former professor of climate at Qassim University, also called on the concerned authorities to set up monitoring stations to measure the extent of pollution and the spread of aerosol density in cities and governorates, and to make the digital indicators for climate measuring available to the public.

He said that dust when its color in the sky is white, like the color of fog, is the most dangerous type for the respiratory system, and it is the suspended and transported dust that resists gravity due to its lightness and small size.

“It reaches the lung and settles there for a long time, causing this foreign body health problems by putting lung functions at risk, as well as leading to asthma, and inflammation of the respiratory system,” he added.