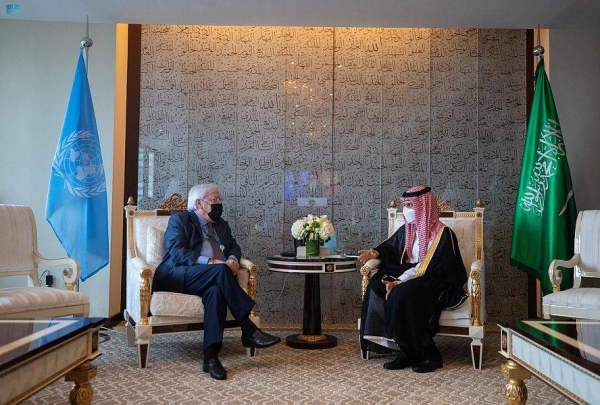 Foreign Minister Prince Faisal Bin Farhan met UN Under-Secretary General for Humanitarian Affairs Martin Griffiths on the sidelines of the 76th annual session of the United Nations General Assembly in New York.
Griffiths updated the Saudi foreign minister about his recent visit to Afghanistan and they discussed the need to prevent a humanitarian crisis in the country.

In another meeting, Prince Faisal discussed bilateral relations with Vietnam's Minister of Foreign Affairs Bui Thanh Son and ways to enhance them.

The meetings was attended by Saudi Arabia’s Ambassador to the United States, Princess Rima bint Bandar bin Sultan, and Undersecretary of the Ministry of Foreign Affairs for International Affairs Dr. Abdulrahman Al-Rasi.
#Afghanistan