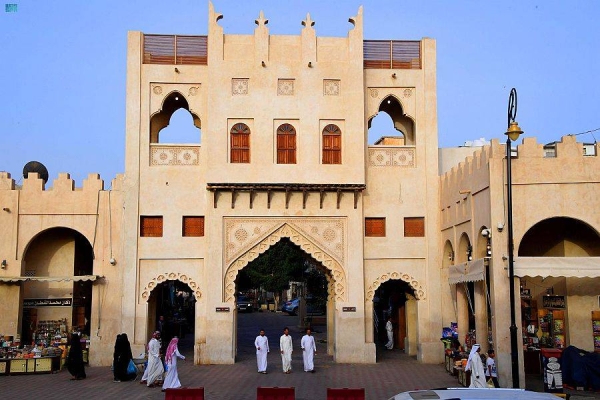 Saudi Arabia’s Heritage Commission, in cooperation with the Al-Ahsa Municipality, launched on Monday the Al-Ahsa Oasis Festival that celebrates the rich cultural and heritage legacy of Al-Ahsa as a global cultural destination in the Eastern Province of Saudi Arabia.
The festival coincides with the FIFA World Cup 2022. Al-Ahsa is the nearest Saudi city to Qatar, the venue of the World Cup, which kicked off on Nov. 20.

Al Ahsa, the largest governorate in the Eastern Province, is located in a prime geographical destination overlooking the Arabian Gulf and the three Gulf states of UAE, Qatar, and Bahrain. It is one of the most ideal and attractive tourist destinations that World Cup fans and visitors from within the Kingdom and outside can visit during their trip to Qatar or their stay in the region during the tournament season. The organizers of the Al-Ahsa Oasis Festival have made elaborate arrangements to attract a huge number of World Cup fans and visitors from various parts of Saudi Arabia and other Gulf States while they were crossing Al-Ahsa on their way to Qatar.

The commission has chosen the historic Al-Qaisariyah Market located in the center of the historic city of Hofuf as a site for celebrating the authentic Al-Ahsa heritage, while it turned the historic Ain Al-Najm into a meeting place for lovers of purebred Arabian horses. There will also be many handicrafts and folk art exhibitions, while other festival activities were distributed among the Ibrahim Archaeological Palace, Muhaires Palace, the House of Allegiance, and Al-Amiriya School.

The festival launched at the Ain Najm site where visitors can enjoy the safe experience of riding the Arabian horse. They can wander among the corners of craftsmen to see the types of traditional art, made from the simplest tools. There were also performances of folk dances that reflect a culture spanning hundreds of ages.

The activities also include heritage and cultural seminars, and 3D light shows, in addition to handicrafts and folklore shows, considering Al-Ahsa Oasis a UNESCO Heritage Site.

Through the field of crafts and arts, the visitors will enjoy the experience of descending into the eye of the star (Ain Najm), which was associated with the memory of the ancient people during the Hajj season. It was a site for convoys of pilgrims from the Gulf countries more than 280 years ago, in exchange for the agricultural bounties available in Al-Ahsa amid the waters of springs.

Historical references confirmed that Ain Najm, which has sulfuric waters, of which waters were drained 30 years ago, is a site for resting caravans of the Gulf countries, and providing them with food. According to the researcher in the history of Al-Ahsa, Khaled Al-Fareeda, Ain Najm has a major role in receiving trips that are preparing to go to Makkah to perform the rituals of Hajj, as it receives convoys of pilgrims before they head to Makkah, especially pilgrims from the Gulf countries.

In another location, the Heritage Commission launched three-dimensional light shows on the walls of the Ibrahim Archaeological Palace while the Muhaires Palace witnessed traditional crafts shows, as well as the exhibition of the Saudi national football team. There will be live shows of the Saudi national team’s matches in the World Cup, in addition to the Saudi Coffee Year 2022 initiative, and musical and folklore performances.

The Ibrahim Palace is considered one of the most famous archaeological sites in Al-Ahsa, which is located in the center of Hofuf as the seat of Saudi rule when King Abdulaziz took control of it on the night of 5 Jamad Al-Awwal 1331 AH during his annexation of Al-Ahsa, and the construction of the palace that dates back to the year 963 AH.

The Muhaires Palace is located north of the city of Mubarraz, which was built by Imam Saud bin Abdulaziz on the top of a hill in the year 1208 AH for military purposes. It is a small war fortress consisting of circular towers with a number of rooms where arms and ammunition and military supplies were stored.

The activities of the Al-Ahsa Oasis Festival began on Wednesday in the center of the historic city of Hofuf where the Qaisariyah Market is witnessing various heritage and cultural events amid the pleasant winter weather. Carts of various foods will be allocated throughout the market, while the theater will witness the display of folk arts and musical performances.

Cultural events take place at the site of the House of Allegiance, the most prominent of which is the Saudi Coffee 2022 initiative, art exhibitions, and three-dimensional light shows, given the historical value of the House of Allegiance, which witnessed the pledge of allegiance of the people of Al-Ahsa to King Abdulaziz and their accession to the Saudi state in 1913.

The historic center of Hofuf is also witnessing the launch of the festival activities at Al-Amiriya School, and these include art exhibitions, educational workshops, storytelling sessions, and 3D light shows.