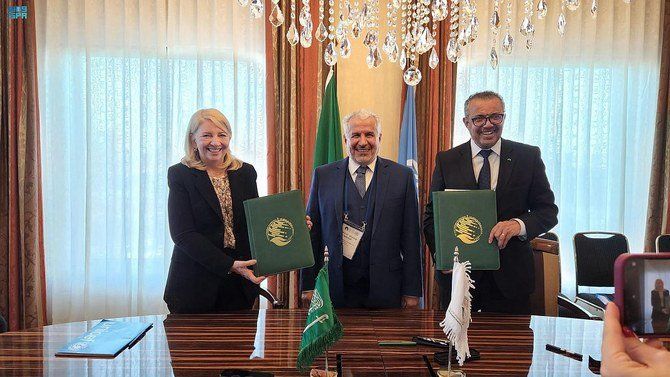 KSrelief signs $10m deals with WHO, UNICEF to prevent spread of measles, polio

The King Salman Humanitarian Aid and Relief Center has signed agreements with the World Health Organization and UNICEF to combat the spread of measles and polio in several countries, the Saudi Press Agency has reported.
KSrelief Supervisor-General Dr. Abdullah Al-Rabeeah, WHO Director General Tedros Adhanom Ghebreyesus and UNICEF Executive Director Catherine Russell were signatories to the $10 million agreements which were signed on the sidelines of the World Health Summit in Berlin.

The first deal, signed with WHO, aims to prevent the spread of measles and polio in Somalia, Sudan and Iraq, while the second agreement, with UNICEF, looks to combat the diseases in Congo, Central Africa, Guinea, Afghanistan and Pakistan.

The agreements also seek to support cooling chains to store vaccinations through the use of electric generators or solar panels, cover operational costs for campaigns, and aid the program by hiring experts from WHO and UNICEF.

Al-Rabeeah said Saudi Arabia has a pivotal role to play in relief and humanitarian fields, and that the Kingdom has always lent its support to countries seeking help out of its belief in the importance of such supportive work.

He noted that the two agreements formed part of international efforts to prevent and limit the outbreak of disease for millions of children, and commended the strategic partnership between Saudi Arabia, WHO and UNICEF.
#Afghanistan