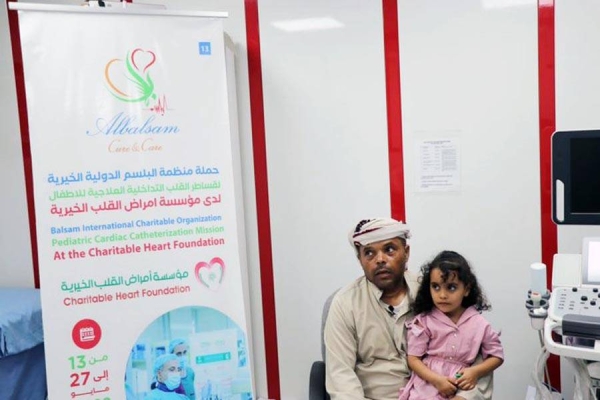 The medical volunteer team of King Salman Humanitarian Aid and Relief Center (KSRelief), in cooperation with Al-Balsam International Organization, has saved the life of a 5-year-old Yemeni female patient who was suffering from an open duct in the heart who underwent a successful meticulous catheterization procedure.
The surgery was carried out within the framework of the 11th voluntary medical project within the “Saudi Pulse” voluntary program for open-heart diseases and surgeries for children in Al-Mukalla, Hadhramout, in cooperation with Al-Balsam International Organization.

The father of the Yemeni girl said that he tried to treat her in Sana’a, but due to the high cost of the catheterization process, which amounts to seven million Yemeni riyals, equivalent to $7,500, and because of his difficult financial situation, he was unable to perform the scheduled operation for his daughter,.

He added that his son had previously undergone an operation at the Saudi Pulse center in Al-Mukalla, which prompted him to contact them and seek assistance from the center’s supervisor, Mohammed Bashaib, who informed him of the availability of KSrelief voluntary medical campaign in cooperation with Al-Balsam International Organization.

The father was advised to bring his daughter for medical tests and catheterization, which were offered for free.

The father added that they arrived at the center within 24 hours and upon their arrival the medical team embarked on the necessary medical tests and set an appointment for the surgery on the same day.

He added that his daughter is in good condition after the catheterization, extending his heartfelt thanks and appreciation to KSRelief, and the volunteer team of Al-Balsam International Organization, and to everyone who contributed to the establishment of this charitable campaign, which has saved the lives of many patients in Yemen.

The "Saudi Pulse" voluntary program for heart diseases and surgeries valued KSRelief’s efforts to offer medical treatment for such difficult cases and to provide various forms of assistance to patients and injured people in Yemen.

KSRelief, in cooperation with the Al-Balsam International Organization, has been implementing the 11th "Saudi Pulse" voluntary program for heart diseases and surgeries since last April in Al-Mukalla.

It has successfully performed 19 open-heart surgeries, and 67 therapeutic catheterization operations, and constitutes an extension of the voluntary medical projects being implemented by KSRelief in various disciplines to help low-income individuals and families from around the world.

Meanwhile, in Hajjah, Yemen, supported by KSrelief, Emergency Center for Epidemic Disease Control in Hiran District, Hajjah Governorate, provided treatment services to 4,001 patients during the period from May 4-10, 2022 AD.