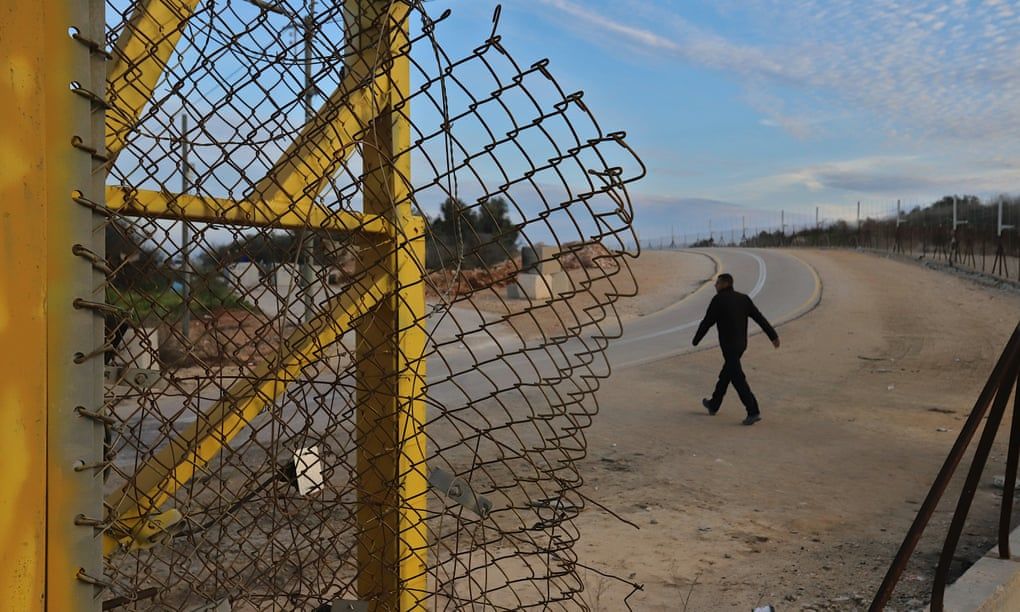 It’s 6am, and the espresso machine at an unusual new business enterprise is whirring.

Proprietor Mohammed set up his breakfast kiosk near the West Bank town of Shuweika three weeks ago, and so far trade is good: hundreds of people pass by every day on their walk to work, picking up bread, cucumbers and tomatoes as well as coffee and cigarettes.

Two years ago, Palestinians entering this 200-metre-wide part of the militarised “seam zone” between Israel’s West Bank separation barrier and the 1949 armistice line would have been shot at by Israeli soldiers. They still patrol just a few metres away. But on a bright March morning, a steady stream of commuters were walking by Mohammed’s new outfit and clambering through a nearby hole in the fencing, the majority on their way to work in illegal construction, cleaning and agriculture jobs in Israeli communities on the other side. 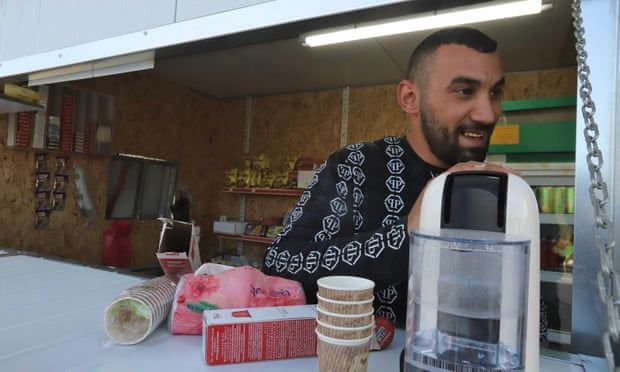 Mohammed, 30, prepares coffee in his kiosk next to the broken security fence.

“It’s not a problem any more,” the 30-year-old said. “I’m just happy to find a good job. For years I made money in more dangerous ways.”

“I can make $100 a day working there,” said a young man with wavy hair who didn’t want to give his name as he was crossing illegally. “Of course I will go.”

Israel started work on the contentious West Bank separation wall 20 years ago to stem Palestinian terror attacks during the second intifada, but the reality of the multi-billion dollar project today is more fluid than it might seem.

Despite the walls and fences, Palestinians have always managed to enter Israel. While there is no data, people in the West Bank have begun crossing in increasing numbers over the last few years in search of better-paid work. That used to entail playing a deadly cat-and-mouse game with the Israel Defence Forces (IDF) – but since the pandemic hit, the situation appears to have relaxed.

Dror Etkes documents illegal Israeli construction in the occupied Palestinian territories for his NGO Kerem Navot and spends most of his time roaming the West Bank in a beaten-up Chinese car. He estimates there are now hundreds of breaches in the barrier, which an unknown number of people use each day. The IDF might occasionally dig a new trench to stop vehicles, he said, but have not moved to fix any of the fences.

“The Israeli public was sold this wall as a necessary security measure. My understanding is there’s been a change of policy, and soldiers are now supposed to turn a blind eye to the Palestinians coming in,” he said.

“Israel knows it needs to relieve the economic pressure in the West Bank and it benefits from the cheaper labour. Which raises the question: if [the wall] is just an arbitrary construction, why is it here at all?”

To date, only around 65% of the barrier’s planned route has been completed: construction stalled long ago owing to a combination of internal politicking, legal battles and international criticism. The majority of the barrier which has been built so far is inside the West Bank, rather than in Israel or on the armistice line. 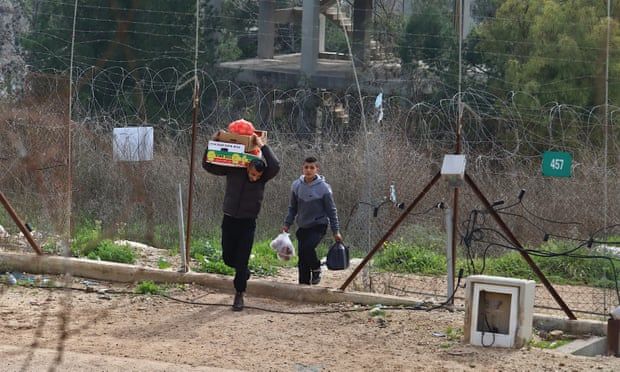 Palestinians cross the broken separating barrier between Baqa al-Gharbiya and Baqa al-Sharqia in the West Bank.

To protect illegal Israeli settlements, some sections reach as deep as 13 miles (22km) into Palestinian territory, dividing communities and leaving farmers reliant on Israeli permits to access their own land. Much of the seam zone is abandoned, strewn with rubbish and used for fly-tipping.

In densely populated places like Jerusalem, the barrier takes the form of an eight-metre-high concrete wall topped with concertina wire and cameras. In more rural areas, however, it is often made up of military patrol roads sandwiched between parallel wire fences, sometimes supplemented with barbed wire, trenches and strips of sand for tracking footprints.

After meeting Mohammed, the Guardian visited five more points along a 22-mile (35km) stretch of the barrier cutting through the top left-hand corner of the West Bank. Holes had been cut in the fencing there to facilitate access to the Triangle, a cluster of majority-Arab-Israeli towns and villages abutting the Green Line.

All of the gaps were big enough for adults to pass through comfortably; incongruously, some were next to locked gates, or close to checkpoints and visible cameras. Some people said they had valid permits, but chose to use the breaches in the fence because it was quicker and easier than queuing at official terminals, where soldiers can question and search them.

In a statement, the IDF said: “Damaging the security fence to create passageways which allow unmonitored infiltration into Israeli territory is a security threat and a clear violation of the law.

Neither the Israeli defence ministry, which is responsible for the maintenance of the separation barrier, nor the Coordinator of Government Activities in the Territories (Cogat), which implements Israeli government policy in areas of the West Bank under its control, responded to the Guardian’s questions.

In the seam zone near Khirbat al-Aqaba, an elderly couple in an old Corolla waited to meet their son, who walked up from the other side to pick up bags of vegetables for the restaurant he works at legally. In the Arab town of Baqa, which was split in two after Israel’s creation, a middle-aged woman dressed in her finest gingerly made her way through a hole in the fence and across a muddy stream bridged by wooden goods pallets to visit her sister, who lives on the Israeli side.

And near Umm al-Fahm, a rupture in the fence down the hill from what appeared to be an improvised checkpoint, controlled by a group of local men not responsible for the safety of Israeli citizens, was big enough for cars. Tyre tracks in the sand suggested it was being used for that purpose.

Very few people dare to cross when they can see an IDF patrol nearby, and there are still dangers. In May 2020, soldiers ambushed workers trying to cross near Faroun, shooting eight people in the legs. 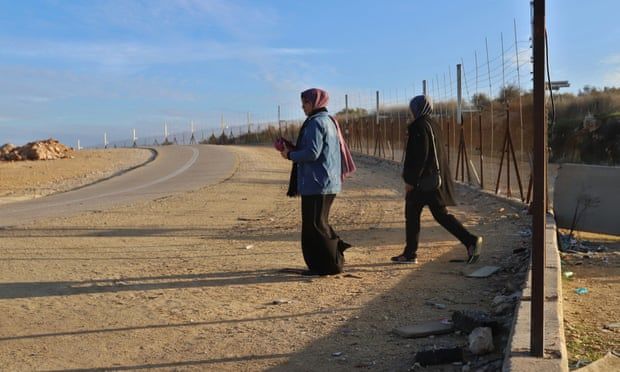 But the ease with which people are now using breaches in the fence – and the carefree attitude displayed by most – is a striking change. One elderly man trying to get from one side of Baqa to the other even argued back with an IDF patrol unit. Rather than make an arrest, they told him to take his papers to the official checkpoint.

Up until at least 2019, there were fewer gaps, and crossings were usually arranged by paid fixers: those entering Israel had to run through dangerous sections, climbing over walls, under razorwire and through drainage systems, all under the cover of darkness.

Unemployment in the West Bank has hovered at around 25% for several years, and wages are much lower than in Israel. Once they arrived, many workers remained in Israel for a week or longer, avoiding police or anyone who might report them, until they had earned enough to risk making the journey home again. Even working with no rights in sometimes dangerous conditions, the risk was worth it.

The pandemic also curtailed the ability of Asian and eastern European service and construction workers to come to Israel, so Israeli businesses’ appetite for cheaper Palestinian labour has increased despite the risk of raids, stop-work orders and fines for employers who are caught.

Such a large flow of people still poses an undeniable security challenge. Some of the illegal workers making the crossing wondered if Israeli surveillance technology is sophisticated enough to monitor persons of interest from afar, or whether some of the Palestinian vendors, makeshift car park attendants and taxi drivers who now service the breaches are informants for the Shin Bet, Israel’s internal security service.

For now, most seem happy to take advantage of the economic opportunities the increasingly porous barrier has created. On a windy plateau above Zemer, a local council in Israel created from the merger of four Palestinian villages, Mohammed Bakir, his son and several legal West Bank employees were using bulldozers to level the earth near their house in the seam zone, hoping to cultivate the land.

After the Gilboa prison break last September, all the crossing terminals were closed, and his workers could not enter Israel for several days while the authorities hunted for the six escapees. The family know the status quo might change and they may have to abandon the project, but believe it’s still worth trying.

From the top of the muddy plain, white blossom from almond and hawthorn trees could be seen drifting onto the rubbish and litter next to the fence below. The barrier meandered to the left and right, a strange grey snake carving up the landscape into before and after.