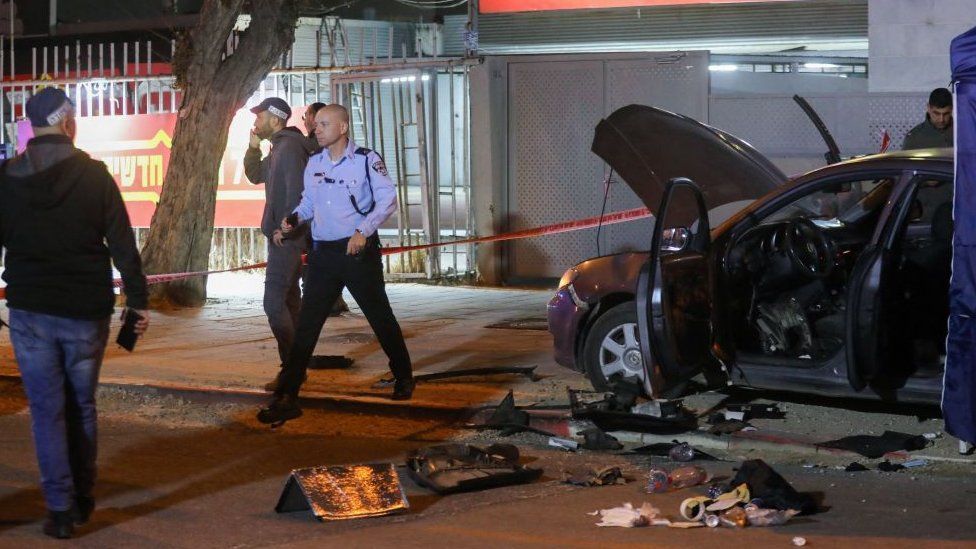 Two police officers have been killed in an attack by two Israeli Arab gunmen in the northern Israeli city of Hadera.

The assailants were shot dead by counter-terrorism officers who happened to be at a restaurant nearby.

The Islamic State (IS) group said it was behind the attack - the second within days by Israeli Arabs linked to the jihadist organisation.

It came as Arab League foreign ministers gathered in Israel for the first time for a summit.

Israeli foreign minister Yair Lapid, who is meeting the ministers from Bahrain, Morocco, Egypt and the United Arab Emirates, said his counterparts condemned the attack.

US Secretary of State Anthony Blinken, who is in Israel for the summit, also denounced the killings.

The gunmen opened fire at a bus stop on Sunday night, killing the two police officers and wounding other people. CCTV footage of the attack shows the men shooting with an automatic weapon and a handgun, before one takes a weapon off the body of one of the victims. The attackers were shot dead by undercover officers from a counter-terrorism unit who happened to be at a restaurant close by.

The two police who were killed were named as Yezen Falah - a member of Israel's Druze community - and Shirel Abukart, both aged 19.

The attackers were identified as residents of the Israeli Arab town of Umm el-Fahm, about 25km (16 miles) east of Hadera. It came just five days after four Israelis were killed in an attack by an Israeli Arab IS sympathiser outside a shopping centre in the southern Israeli city of Beersheba. The assailant in that incident was shot dead by a bus driver.

Attacks in Israel linked to IS are rare, the last being in June 2017 when IS said it was behind a gun and knife attack in Jerusalem that killed a policewoman.

"A second attack by ISIS [IS] supporters inside Israel requires the security forces to adapt quickly to the new threat. And so we will do," he said.

Following the attack, Israel's chief of staff ordered the deployment of extra troops to the occupied West Bank, while police forces across the country have also been put on a heightened state of alert.

There are fears of further incidents in the month ahead, when the Muslim festival of Ramadan, the Jewish festival of Passover and the Christian festival of Easter coincide in a rare convergence.