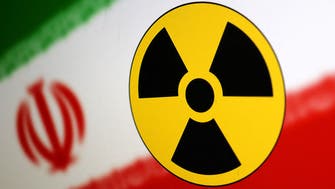 Iran's foreign minister said Monday that a summit to take place this week in Jordan will be a “good opportunity” for negotiations aimed at restoring the 2015 nuclear accord.
On-off talks to revive the deal, formally known as the Joint Comprehensive Plan of Action (JCPOA), started in April last year directly between Iran and Britain, China, France, Germany and Russia, and indirectly with the United States.

But the indirect talks between the Washington and Tehran, mediated by the European Union, have stalled for several months with Iran facing protests over the September 16 death in custody of Mahsa Amini, a 22-year-old Iranian of Kurdish origin.

“Jordan is a good opportunity for us to complete these discussions,” Iran's top diplomat Hossein Amir-Abdollahian told reporters in Tehran.

His comments come a day before Jordan hosts the “Baghdad II” conference on Tuesday, bringing together key Middle East and international players -- including Iran and Saudi Arabia -- in a bid to defuse regional tensions.

Amir-Abdollahian and EU foreign policy chief Josep Borrell are both expected to attend.

“I hope that... we will see a change of approach and the American side will behave realistically,” Amir-Abdollahian said.

“I say clearly to the Americans; that they must choose between hypocrisy, and the request to reach an agreement and the United States' return to the JCPOA,” he added.

The IAEA has for years been calling on Iran to explain the presence of undeclared man-made uranium found at three sites, requesting access and the collection of samples.

The 2015 agreement gave Iran sanctions relief in exchange for curbs on its nuclear program to guarantee that Tehran could not develop a nuclear weapon -- something it has always denied wanting to do.

But Washington unilaterally withdrew from the accord in 2018 under then-president Donald Trump, and the reimposition of biting economic sanctions prompted Iran to begin rolling back on its own commitments.
#Donald Trump