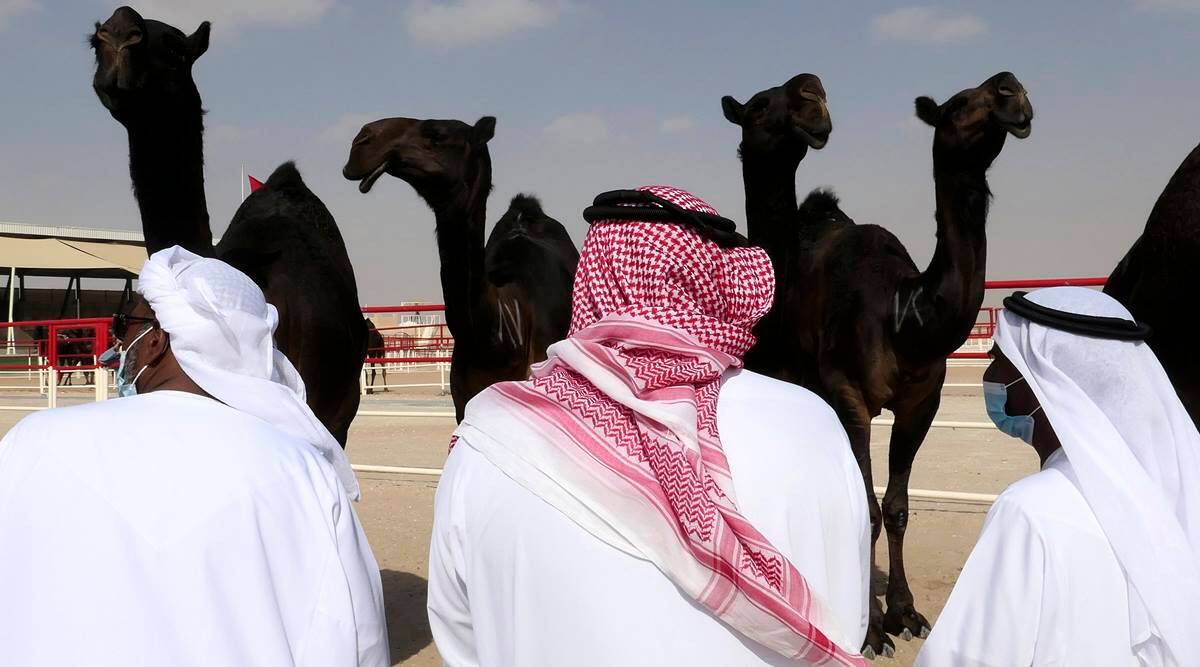 In UAE desert, camels compete for crowns in beauty pageant

Even as the omicron variant rips through the world, legions of breeders from Bahrain, Kuwait, Oman, Saudi Arabia and Qatar traveled to the UAE’s southwestern desert this week with 40,000 of their most beautiful camels for the Al Dhafra Festival.

Deep in the desert of the United Arab Emirates, the moment that camel breeders had been waiting for arrived.

A single question loomed over the grandstand: Which camels were most beautiful?

Even as the omicron variant rips through the world, legions of breeders from Bahrain, Kuwait, Oman, Saudi Arabia and Qatar traveled to the UAE’s southwestern desert this week with 40,000 of their most beautiful camels for the Al Dhafra Festival. 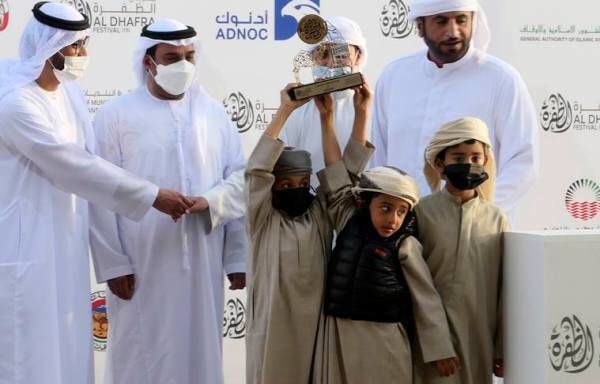 The five-man jury at the annual pageant insists beauty is not in the eye of the beholder. Camel aesthetics are evaluated according to precise categories determined generations ago. Only female camels participate because males fight too much, authorities said.

As hundreds of woolly black camels trotted through the dusty pastures, necks and humps bobbing, one of the organizers, Mohammed al-Muhari, outlined the platonic ideal.

Necks must be long and slim, cheeks broad and hooves large, he told The Associated Press on Wednesday. Lips must droop. They must walk tall with graceful posture.

“It’s not so different from humans,” al-Muhari said, his robe sparkling white amid clouds of dust.

The high standards have prompted many breeders to seek an advantage, using banned Botox injections to inflate the camel’s lips, muscle relaxants to soften the face and silicone wax injections to expand the hump.

Festival spokesman Abdel Hadi Saleh declined to say how many participants had been disqualified over plastic surgery this week. All camels undergo rigorous medical exams to detect artificial touch-ups and hormones before entering Al Dhafra Festival. 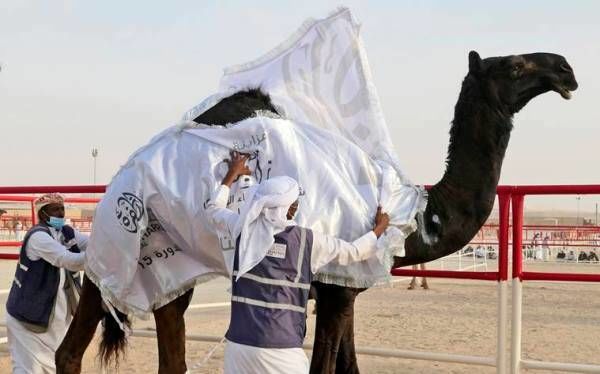 Since Emirati investigators began employing X-rays and sonar systems a few years ago, Saleh said the number of cheaters has plummeted.

“We easily catch them, and they realize getting caught, it’s not worth the cost to their reputation,” he said.

A great deal is at stake. Al Dhafra Festival offers the top 10 winners in each category prizes ranging from $1,300 to $13,600. At the main Saudi contest, the most beautiful fetch $66 million. Camels change hands in deals worth millions of dirhams.

But breeders insist it’s not only about the money.

“It is a kind of our heritage and custom that the (Emirati rulers) revived,” said 27-year-old camel owner Saleh al-Minhali from Abu Dhabi. He sported designer sunglasses over his traditional headdress and Balenciaga sneakers under his kandura, or Emirati tunic.

Gone are the days when camels were integral to daily life in the federation of seven sheikhdoms, a chapter lost as oil wealth and global business transformed Dubai and Abu Dhabi into skyscraper-studded hubs with marbled malls, luxury hotels and throbbing nightclubs. Foreigners outnumber locals nearly nine to one in the country. 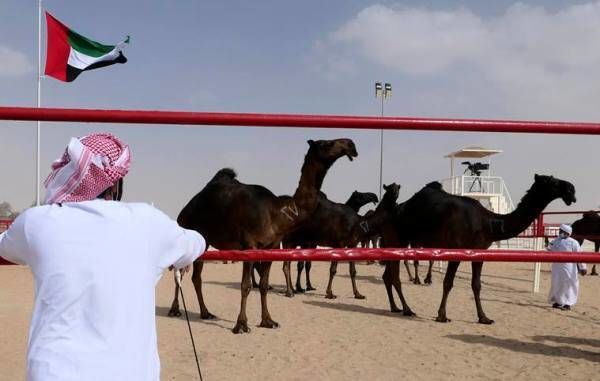 Tens of thousands of camels from across the region have descended on the desert of the United Arab Emirates to compete for the title of most beautiful.

However, experts say Emiratis are increasingly searching for meaning in echoes of the past — Bedouin traditions that prevailed before the UAE became a nation 50 years ago.

“Younger Emiratis who have identity issues are going back to their heritage to find a sense of belonging,” said Rima Sabban, a sociologist at Zayed University in Dubai. “The society developed and modernized so fast it creates a crisis inside.”

Camels race at old-world racetracks in the Emirates, and still offer milk, meat and a historic touchstone to citizens. Festivals across the country celebrate the camel’s significance. Al Dhafra also features falcon racing, dromedary dancing and a camel milking contest.

“People in Dubai may not even think about them, but young people here care deeply about camels,” said Mahmoud Suboh, a festival coordinator from Liwa Oasis at the northern edge of the desert’s Empty Quarter. Since 2008, he has watched the fairgrounds transform from a remote desert outpost into an extravaganza that draws camel lovers from around the world.

In a sign of the contest’s exploding popularity, about a dozen young Emirati men who call themselves “camel influencers” filmed and posed with the camels on Wednesday, broadcasting live to thousands of Instagram followers. 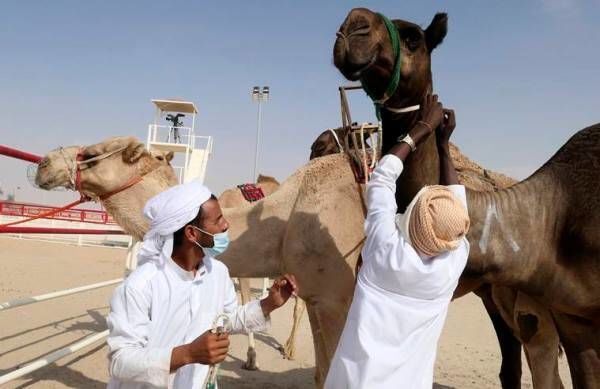 The digital likes have proven important this year, as the coronavirus pandemic curtailed tourism to the festival and dampened the mood. Police checked that visitors had received both vaccine doses and tested negative for the virus. Authorities nagged attendees to adjust their face masks, threatening fines. There were few foreigners or other spectators strolling the site Wednesday.

Each category in the 10-day pageant is divided into two types of camels: Mahaliyat, the tan breed that originates from the UAE and Oman, and Majaheen, the darker breed from Saudi Arabia. Wednesday’s showcase focused on 5-year-old black Majaheen camels.

For hours, judges scrutinized each camel, scribbling lists of the animal’s body parts for scoring purposes. Breeders shouted to startle camels so they’d look up and show off elongated necks.

As the sun set over the sands, the winning breeders were called to accept their gleaming trophies. Down below in the dirt rings, camels were crowned with gold and silver-lined shawls.

“Until now we are the first in the category … We’ve received over 40 prizes (in various camel contests) this year alone,” beamed Mohammed Saleh bin Migrin al-Amri as he juggled four trophies from the day, including two golds.

Then he jumped into his Toyota Land Cruiser. The victory parade of honking SUVs and grunting camels faded behind the desert dunes.